by Brian Hieggelke
November 8, 2012Filed under: 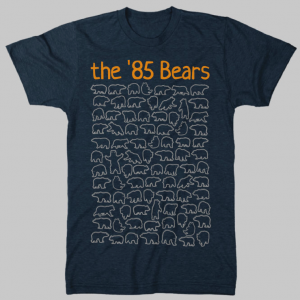 Just below street level on the 3400 block of Broadway lies buried treasure. Well, it’s not exactly buried treasure so much as it is “bear”-ied treasure. Chitown Clothing, a pop-up shop located a short stack of steps below the sidewalk in what would be considered a garden apartment, offers a selection of Chicago Bears t-shirts for fans to sport at the game this Sunday. For fans wondering what to wear to the game—or how to show their spirit when they can’t cheer on their team at Solider Field this Sunday—ponder no more.

Chitown Clothing (3435 North Broadway) sells unique, creative t-shirts designed and sold by husband-and-wife team Kevin and Sara Kasarski. The company is a joint effort, drawing from Kevin’s background in fine arts and graphic design and Sara’s in writing and Internet marketing. Kevin’s father also owns a screen-printing company in Carpentersville. What started as a side venture set on the back burner behind the couple’s full-time jobs has become their full-time work in less than three years.

Kevin explains that their aim is to create Chicago shirts with a vintage aesthetic, without looking like they were sold at a gas station. All of their hand-screenprinted t-shirts reflect an intimate knowledge of the city and trending topics within it. Their inspiration for the designs comes from “the intricacies of Chicago culture,” says Kevin. The t-shirts are not limited to designs centered on the Bears; all of their tees don elements of the city, from the flag to inside jokes about the city (just ask Kevin about Malört).

The shirts are contemporary in wit, but vintage in look. One shirt has an illustration of Mike Ditka posed coolly in the center with his shades on. Below are a few phrases that ultimately explain why “He is… the most interesting man in the world”; a spinoff of the popular Dos Equis commercials. A hooded sweatshirt captures greatness in the simple design of an orange circle surrounding Walter Payton with the word “Sweetness” below. Several shirts commemorate Ditka and the ’85 Bears (cleverly illustrated with the outlines of eighty-five bears on the shirt).

While not every T-shirt they design and sell relates to the Bears, their designs all reflect elements of Chicago that sports aficionados and Windy City urbanites can take pride in. Kevin designs all of the shirts, but Sara’s contribution lies in creating concepts for the tops.

The company began gaining popularity when Sara and Kevin created several unlicensed, unique t-shirts involving the Blackhawks and their Stanley Cup win. That trophy served as a turning point—not only for Chicago sports—but also for their business when the Kasarskis decided to invest all of their time into Chitown Clothing as their priority pursuit. They each continued freelance gigs, but designing apparel became their big gig.

Two years ago, they participated in summer street fests. Originally discouraged by the admittance fee to be a vendor at the events, they were surprised by the success of Chitown Clothing and imagined the possibility of retail as more than virtual. They discovered the apartment space for lease while on a walk around their Lakeview neighborhood and decided it was an opportunity to seize.

Pop-up shops are not common in Chicago, but Sara’s upbringing in Cleveland familiarized her with the concept of abandoned buildings-turned-fleeting shops. The store will stand throughout the holiday season, keeping in mind those who procrastinate Christmas shopping and then need a gift last minute as well as those who don’t shop online. While the pop-up shop is temporary, with a lease at their current location ending in January, the online store is always in business. The retail shop grew out of the couple’s free e-commerce website and they continue to keep the website up to date.

A short walking distance away, nestled on the intersection of Clark and Sheffield lies more Chicago Bears garb for Sunday’s game—and any game, for that matter. The clean, minimalistic and all-white interior (with the exception of stripes painted behind the door in the colors of the Chicago flag) of Chitown Clothing seems worlds away from the paint-splattered floor and artwork-covered walls at Strange Cargo. Music, a rock ‘n’ roll medley when I visited, added to the vintage vibe of the store. 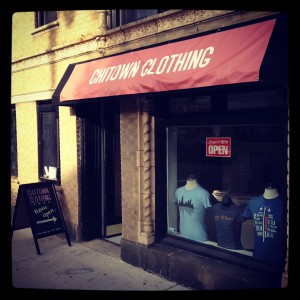 The customers are practically greeted by Bears garb; the first several racks of T-shirts are dedicated to the Monsters of the Midway. Hanging above the racks are retro Bears cardigans and knit sweaters that emit a feeling of nostalgia—perhaps for another season like 1985—and radiate a sense of dated coolness. Below them are blue-and-orange-striped scarves and hats in a basket. The racks below have women’s wear on one side (recognizable by the cute, cuddly cub depiction of the ferocious mascot) and men’s on the other (with the bone-crushing bear as a beast to be feared). The supply of shirts at Strange Cargo is creative and artistically relates to Chicago icons like Mike Ditka.

One T-shirt featured his face on a toaster. Another has his signature aviator sunglasses with the reflection of the field in the shade lenses hovering over his iconic mustache. The shirts at Strange Cargo also celebrate the ’85 Bears; one long-sleeved blue shirt has an orange picture of Bears players posing in freeze-frame Super Bowl Shuffle dance positions. Strange Cargo features Bears attire for every taste. For those who say the colors are orange and blue: an orange shirt with the word “Bears” proudly spread across the chest in navy. For those who cheer on the blue and orange: navy shirts with a fierce orange bear’s head in the center. Some had just a logo; others accompanied the logo with type. Some shirts had plain sleeves while others had white, orange or navy stripes encircling them.

For fans that adore a single player, Strange Cargo accommodates your needs. One shirt pays tribute to Walter Payton with a graphic orange illustration posted on a blue t-shirt. Devin Hester, with his arms outstretched, is printed on another t-shirt floating above the word “‘ridiculous.” Another features a tribute to kicker Robbie Gould kicking the football through the goal-post like antennae of the John Hancock building, with the play on words “Solid Gould” inked above. This place is a “Gould mine” for creative Bears tees.

The designs printed on the T-shirts come from a combination of contributors, including Nike, Reebok, designers and Banner 47. Banner 47 makes designs specifically for Strange Cargo on occasion because of the large business the store provides them. Strange Cargo has creative, unconventional Bears t-shirts that are more stylish and intriguing than the generic shirts. However, if shoppers want a personalized top, the employees can crank out a customized shirt with heat-applied lettering ten minutes after the order has been placed.

If the Saturday and Sunday morning rush at Strange Cargo (3448 North Clark) is too overwhelming, head to Main Event (3456 North Clark) just two doors away. The wooden floors, wooden countertop and wooden cubbies that house hooded sweatshirts create the ambiance of a wooden lodge. The Bears gear at Main Event lacks the handmade touch, but the selection of jerseys, hoodies and Alyssa Milano women’s wear is plentiful.

Wrigleyville Sports (959 West Addison), conveniently located next to the Addison red line station, has the widest selection of the mentioned stores in terms of Bears wear. The store sells baseball caps, cowboy hats and trucker hats. The entire back section, including the wall, is dedicated to the Chicago Bears. It offers women’s shirts with v-neck cuts and grainy, washed out Chicago emblems for a retro look. The store has everything ranging from outer layers like hooded sweatshirts and quilted vests to the most inward layers of argyle socks and undies. Jerseys are sold in a variety of colors, cuts and with beaded embellishments for women. This is the store for sportswear by brand name designers like Nike, Mitchell & Ness, 4Her by Carl Banks, Banner 47, Antigua and NFL Team Apparel.