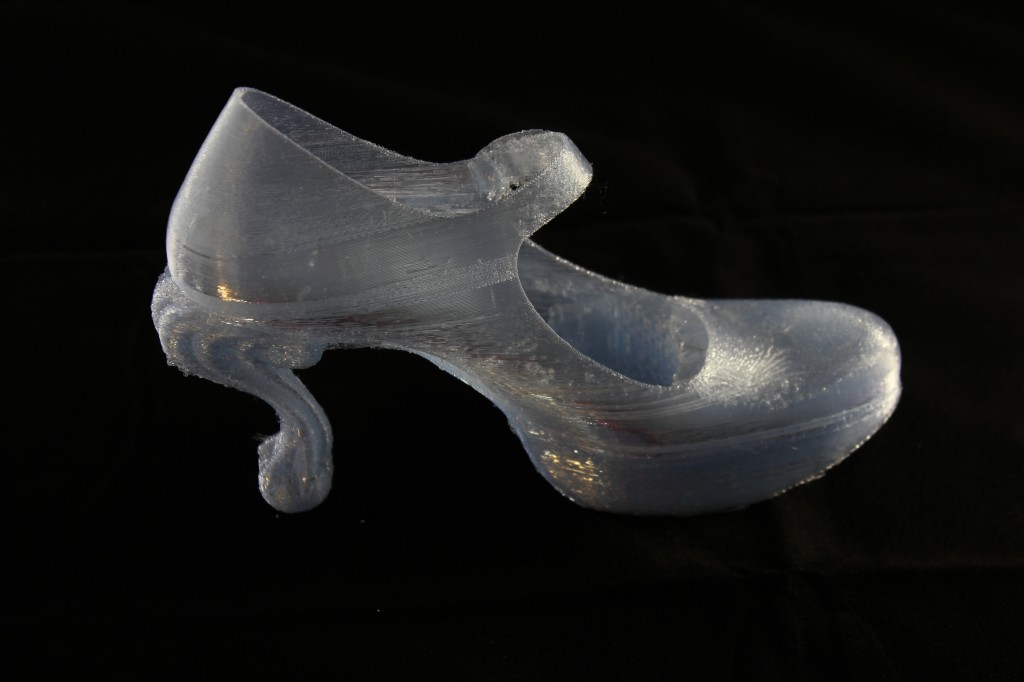 I’ve known the local artist Tom Burtonwood for years. A few weeks ago, he emailed me about a new business he’s involved in starting, The 3D Printer Experience.

I’ve been fascinated by the idea of 3D printing ever since I first heard about it a couple of years ago, in a speech delivered by the futurist Ray Kurzweil. It sounded surreal as Kurzweil described a future in which things like houses could be emailed and printed out in poor parts of the world, for example. It was hard to visualize, frankly, as realistic technology.

Tom and his colleague Michael Moceri brought a 3D printer to Expo Chicago last fall, where they were scanning fairgoers’ heads and printing out plastic busts. It was the first time I’d seen the nascent technology in practice. 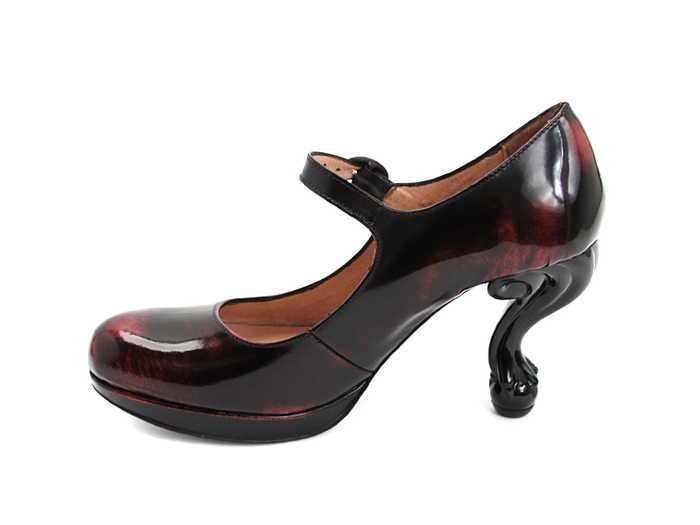 1. As we were trying to think of something fresh, yet graphic and iconic for the inaugural Design 50 cover, I started thinking about a  3D printed version of a high-heeled shoe (the ultimate fashion icon). We’d combine fashion with the cutting-edge of product-design technology, two of the main elements of the Design 50. Tom said he thought it could be done, and I found a stylish version on the John Fluevog web site. Since we know the folks there, we were optimistic they’d be up for helping us with this project. They agreed to lend the shoe and Tom picked it up in order to scan it. 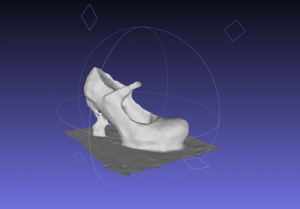 2. This proved to be problematic. The reflective surfaces foiled the scanning process and the best Tom could come up with was this image above. 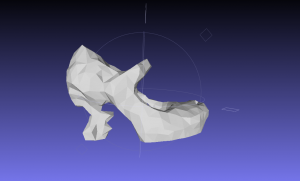 3. In order to print something that would look cool on the cover, he “decimated” it (good thing Tom’s an artist!) and gave us this as his recommended rendering for the printer. It would be cool, but not necessarily what we’d envisioned. Time was getting short, but Tom said we could do much better if we could get a 3D file from John Fluevog. So we reached out to the company and found out they had only a model of the heel, but could model the upper and sole in a few hours—and did! 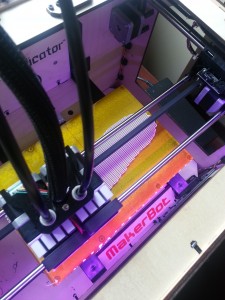 4. We were now four days into the project, and getting dangerously close to deadline. If this did not turn out, we’d have to scramble for a new cover idea at the very last minute. Tom sent me this image, which was the beginning of the printing, with an estimate that it would take all day. 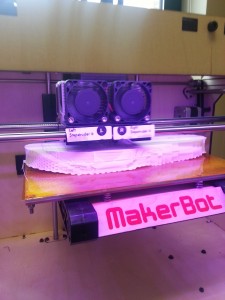 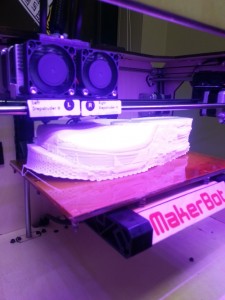 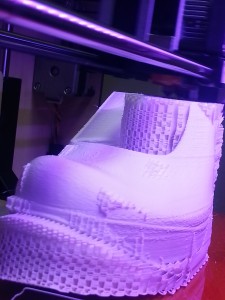 5. After four hours, the sole was forming. After eight, the upper was starting to show. After midnight, eleven hours in, the shoe was coming together. Tom went home for the night and returned the next day. 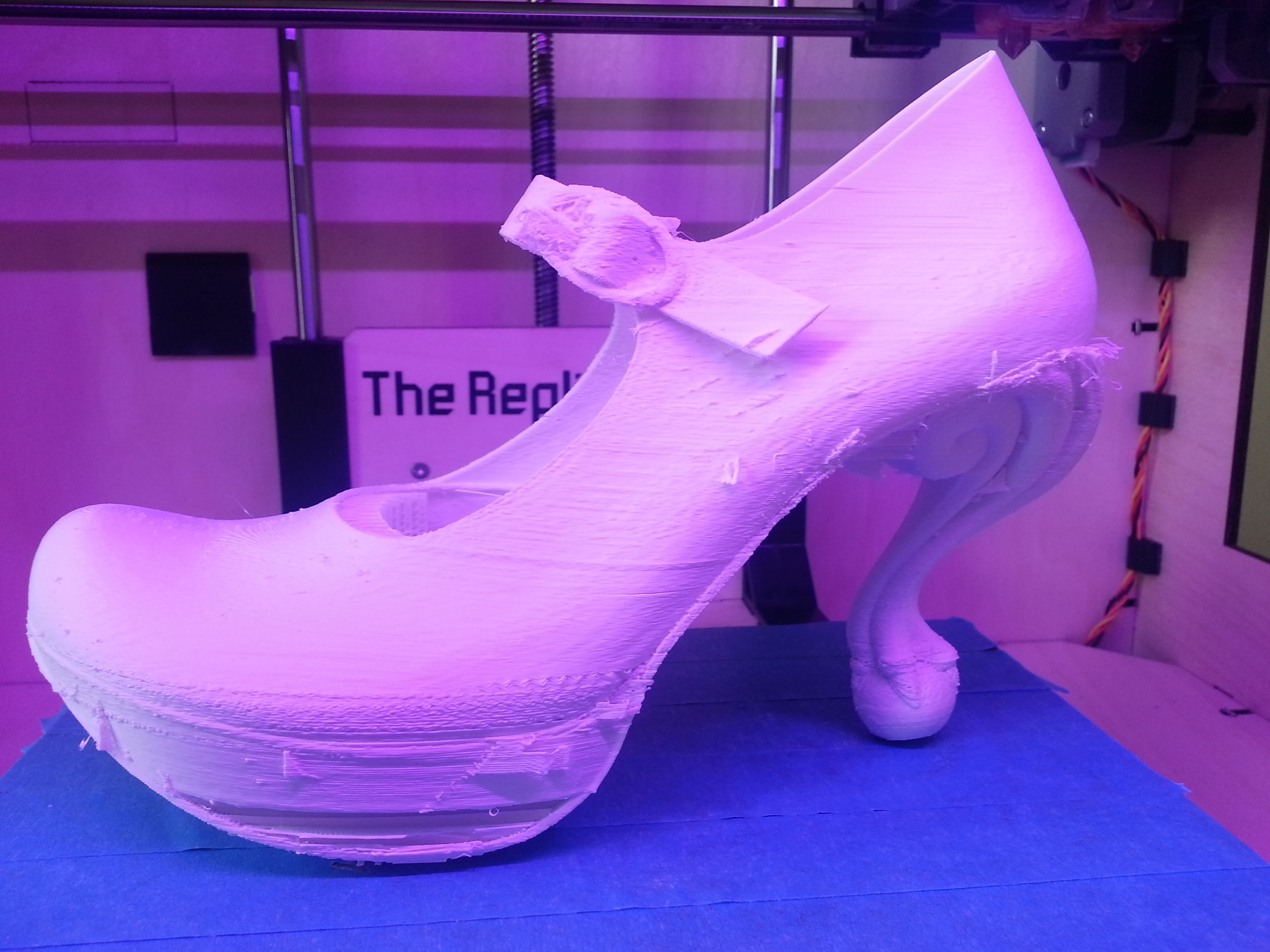 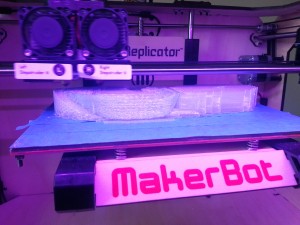 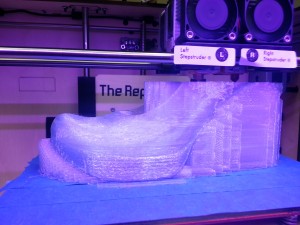 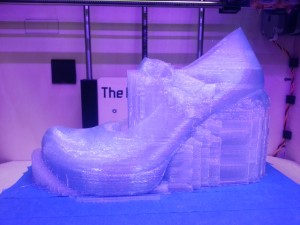 7. But Tom also wanted to try a “glass slipper version.” And with that, he printed the shoe that became the foundation of our cover, as designed by Matthew Hieggelke. 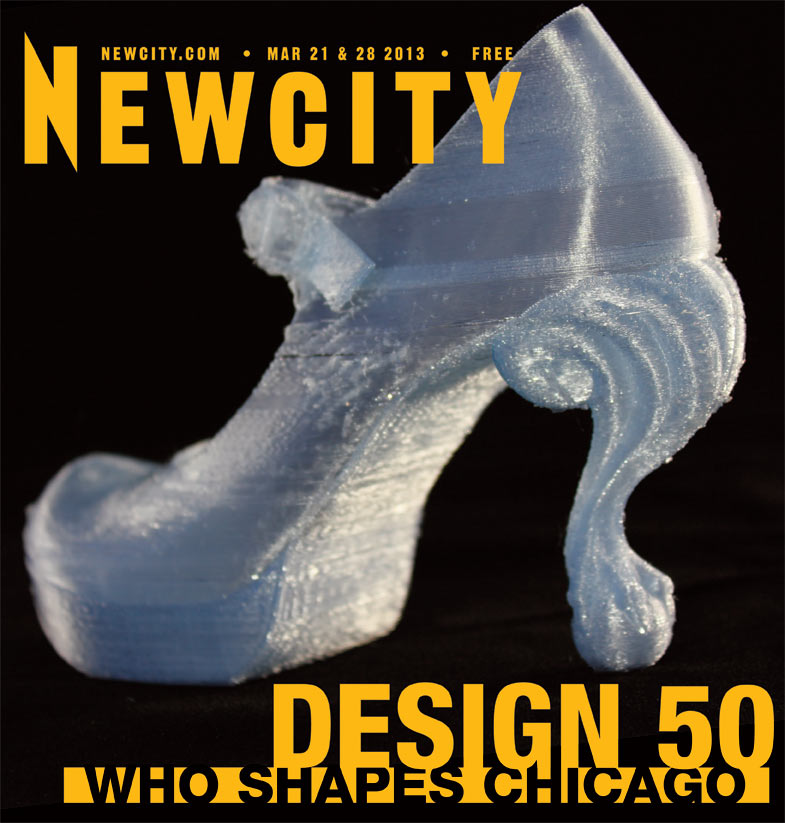