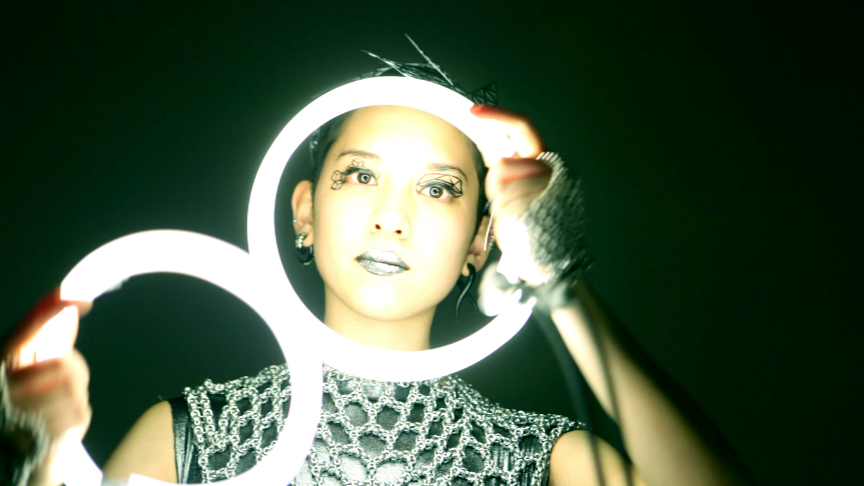 By Mary A. Osborne

Sky Cubacub wears leather holsters that hold her Lindstrom pliers. Essential tools at hand, she is ready to chainmaille at any time. “It also makes me feel like a cowboy with his guns, ready for the quick draw,” says the petite young artist. Cubacub’s elaborate garments, which are more sculptural than fashion, are futuristic in appearance and only slightly reminiscent of the armor worn by medieval knights. She works obsessively, as artists often do, to create her intricate designs wrought entirely of metal rings.

It is the intense process of the handwork that appeals to her. Thousands of tiny wire circles called “jump rings” are linked together one at a time into flat or round patterns, akin to the various weaves used in knitting. For comfort and wearability, she usually prefers lightweight aluminum rings to those made of heavier steel or brass. Anodized aluminum rings in various colors, as well as wax, washers, scissors, pop tops, soup tops, sheet aluminum, paper, ceramics and beads have also been incorporated into her designs. It might take an entire month or more for Cubacub to create a single piece of custom couture, but she finds the work calming, perhaps meditative. “Through chainmaille, I have found my patience,” she says. Currently, she is making a sweater out of metamaille (the artist’s term for chainmaille made from chainmaille). She estimates it would take four months to complete the garment if she were to work on this project alone.

Cubacub views the human body, particularly her own, as a form to hold art. She describes her typical attire like this: “I wear a headpiece, tons of jewelry, a shirt I embroidered, and then I have my geometric makeup. On days that I don’t have to bike or carry a lot of stuff, I will wear an entire outfit made of chainmaille with one of the unitards I made, and my shoes I custom-made for my feet.” Every day is a performance.

Having been raised by a dance instructor and an artist, creativity runs through Cubacub’s veins. Images of geodesic domes found in books by Buckminster Fuller inspired her childhood imaginings. She was still just a kid when she discovered examples of chainmaille at Caravan Beads in Lakeview. She had to wait until she was thirteen to take the introductory class offered at the shop by Rebeca Mojica, and when she did she became hooked. During her senior year at Northside College Prep High School, she created a fashion performance featuring student models in head-to-toe looks in chainmaille and found objects. The project won her a full-ride to the School of the Art Institute of Chicago, where she is currently a junior. 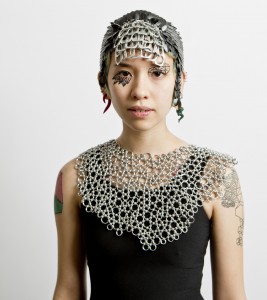 I asked Cubacub if wearing chainmaille gives her a sense of protection, like a knight wearing armor. “I was always interested in the strength that it suggests,” she says. “I have been building myself this armor or protection, not against harm exactly, but as a way to give me courage. I usually feel really shy, but it has given me the strength to be very social. I do not ever really have to go up to people, they will always come up to me.”

Cubacub’s fantastical conversation pieces are created with a type of repetitive motion reminiscent of the assembly line. While the mechanized repetition on the line results in uniform pieces, Cubacub’s repetitive handwork creates an artisanal product. It is the slow, thoughtful process of the craft that holds value, both for the artist and for those who purchase her jewelry or garments. In addition to chainmaille, Cubacub works in screen printing, hand-embroidery, scherenschnitte (paper cutting), millinery, shadow puppetry, natural dyeing and shoemaking. The opening and closing of jump rings, the up-and-down movement of the needle in her embroidery, the cutting of symmetrical shapes out of paper are the slow steady rhythms that create these wondrous, one-of-a-kind works.

Purchase Sky Cubacub’s work at Etsy.com or Fab.com, and visit her at skycubacub.com. Later this year she will be opening a studio and gallery, to be open by appointment, in Chicago’s North Center neighborhood.