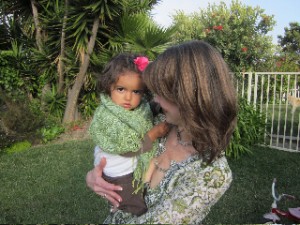 My grandmother believed in restraint. “You don’t have to tell all that you know,” she would say, and implicit in her statement was the notion that to cultivate mystery was to cultivate power. She extended this philosophy to her fashion choices. She loved black cashmere sweaters, a discreet monogram, long, buttery-soft leather gloves and her Christian Dior carry-on (which she acquired decades before designer logos were a staple on the arms of  “It Girl” aspirants everywhere). But I sensed at an early age that beneath my grandmother’s studied sartorial elegance there existed a second story and perhaps even a secret life, one that first became visible to me in the nineteen seventies, when she returned from a month spent in Mexico, bringing with her the silver necklace that is now my most treasured wardrobe staple.

It’s a piece almost impossibly heavy and beautifully crafted, a string of shimmering silver discs, each hand-pressed with a hypnotic spiral design. Long enough to be twisted around the neck three, even four times, creating a thick waterfall of silver, it can also be worn as a single strand that grazes the hips, for a flapper-who-prefers-silver-to-pearls effect. It’s a necklace that seems made to be worn with the type of tunics that have turned Tory Burch into a brand name, but my grandmother would have eschewed such an obvious pairing. Instead she wore the necklace with her classic cashmere boatnecks or a simple A-line black dress, and this fantastic bauble became her sartorial version of a bread crumb, providing a clue to those who encountered her that there was something contradictory and complex and essentially unknowable about her.

I knew little of the necklace’s provenance beyond the fact that my grandmother had purchased it at an open-air market in Mexico, during a trip taken not terribly long after she, not much older than I am today, had been made a too-young widow. On a night not long after she returned from her travels, the two of us stayed up talking—she preferred to stay in the twin bed in my childhood room during her frequent visits to our family home—and she confided about the “persistence” of certain men she met while on holiday. My teenage self felt an anticipatory shiver of delight that I, too, might someday be so bothered, and I sensed in my grandmother’s words that though such male attention may have been unwelcome—and I wasn’t wholly sure about that—it also served as a reminder that she was still beautiful and vital and present, a member of the land of the living who needed to retain her will to live. It was a will that might assert itself when she considered something large, like the love that she had for her surviving family or her lifelong passion for piano playing. And it was a will that might assert itself when she looked upon something relatively small:  a necklace molded from Mexican silver, a reminder that even a world made sad by the death of one’s husband remained a world where there were things of beauty to be found.

Over the decades, when my grandmother wore that necklace, it became for me something greater still.  It was a talisman against the inevitable change and loss she experienced as the years went on, a reminder of her passion for travel, and a wink and a nod that told the careful observer that this elegant older woman had a brilliant, even glittering backstory. Yet until almost the very end—my grandmother lived to be ninety-six-years-old—she remained as grounded in the here and now as she was in her personal history. This was demonstrated by her decision to give me the silver necklace long before she could have tired of wearing it. “I want you to have this while I can still take pleasure in seeing you in it,” she said to me at the time, and that gesture epitomized my grandmother. She wanted my present—my future, really—to shimmer as had her remembered past.  And when I wear that necklace—which I would love for its fabulousness, even I didn’t love it for its link to my grandmother—I become something greater than my self. I become the next chapter in a rich, multi-generational female story.

My four-year-old niece Arline, named for my grandmother, has her own emerging, endearing sense of style—an odd sort of Little-Edie-Meets-Hello-Kitty vibe that manifests itself in an entirely appropriate rejection of anything prissy or plain or plaid.  She will wear a flower in her hair (but she must choose the flower), and complement that with her favorite Converse shoes. She shows all of the signs of being a future fashion iconoclast, someone for whom contradiction will be a virtue, not a vice. She dresses in a way that demands that we see her, and we do. Touchingly, she loves it when I wear my grandmother’s necklace, which I already can see must one day be hers. I like to admire her admiring it, a silver tie that binds us to each other and to her namesake, a family story that in her case is only beginning to be told.