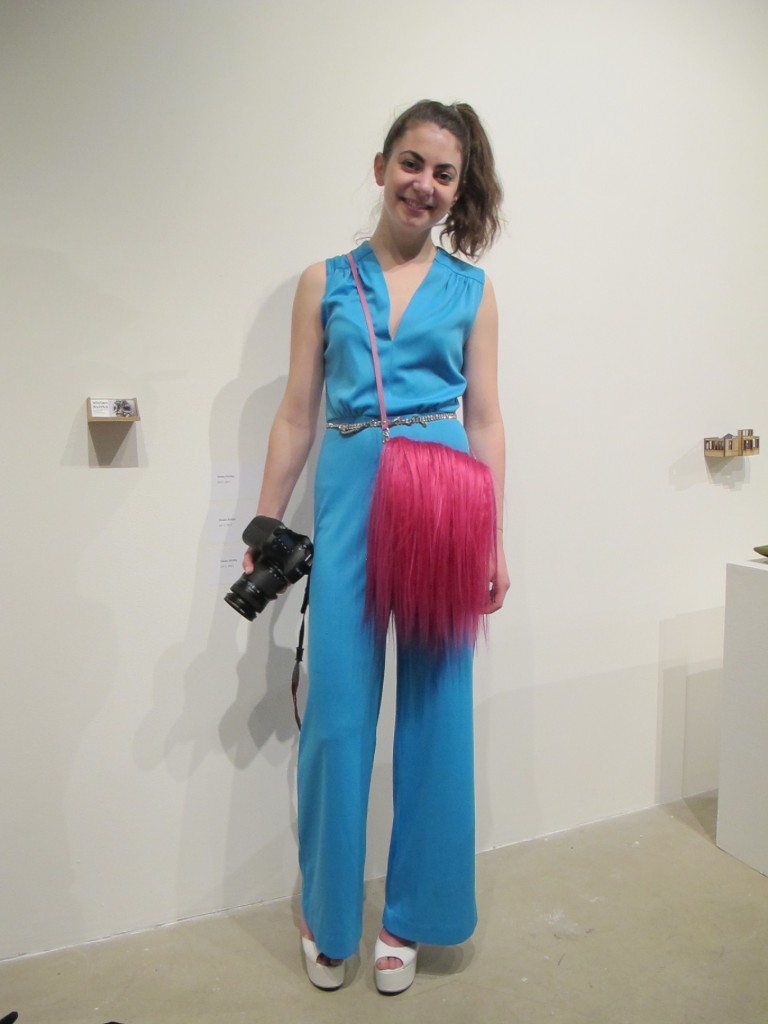 Vivian Kvitka (viviankvitka.com) was presenting her work at the SAIC BFA 2013 show.

Why did you choose to present wearable art in this show?
I have been making masks for a while now and when I decided that the masks needed to be worn, I realized I would have to make conscious choices about what the performers would wear. The costumes were secondary to the masks but ultimately they completed the characters.

What do the garments you fashioned represent? Why were your performers standing on a scale? Why were they holding weapons?

The characters are my response to, and regurgitation of pop culture. They address issues of gender, identity, beauty, and desire.  Why I chose to put my characters on stacked bathroom scales was a question I was asked repeatedly; I chose this for several reasons. As many artists, I am constantly questioning the value of my work, weighing the work was a subtle nod to this insecurity. The bathroom scales represent another more universal self-consciousness of body image. Body image is not a central concern but it allows for a specific thought entry to the work. The weapons were to subvert the gender of the characters further. They are in the form of something both defensive and aggressive, but are merely toys, too fragile to do any damage.

How do you think fashion can convey an idea?
I don’t see my work as fashion exactly. These characters would never walk down a runway. I am however very much interested in using the body as a basis for form which is akin to fashion.

What idea were you trying to convey with your look that night?
I dressed myself that night to match my characters.  I was going for over-the-top-faux luxury.

Can you tell me a bit about your purse?
The hair purse was inspired by blogger Ivania Carpio over at love-aesthetics.blogspot.com. I had some leftover hot-pink hair from another project and when I saw Ivania’s hair purse I knew what I had to do with it.

—Interview and photgraph by Isa Giallorenzo