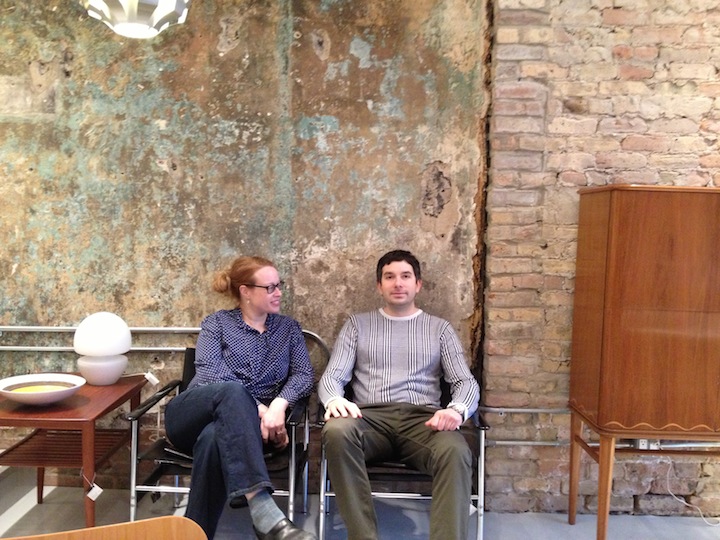 Laura Davis and Don Schmaltz at Circa Modern

What is it about modern design that compels us to collect it? “We don’t want the same antiques our parents wanted, ” says Laura Davis of Circa Modern, a shop specializing in modernist design that celebrated its one-year anniversary this past April. A person who purchases a Serge Gainsbourg LP from Dusty Groove records and an Alex Chitty altered photograph from Corbett vs. Dempsey art gallery and a torta from La Pasadita—all neighbors to Circa Modern—would also be the type to buy a ceramic Martz lamp or an odd number of orange fiberglass Herman Miller chairs. This zeitgeist cloud of storefronts on Ashland near Division describes our generation’s taste for well-made, stylish objects that stay fresh against time, or at least wilt elegantly.

The vintage modern market is especially healthy in Chicago. We are familiar with streamlined designs and manufacturing-turned-luxury materials (molded plywood and plastic!) because the New Bauhaus immigrated and took root here, and even our homegrown Prairie School has a European accent, which have been revived as sophisticated, functional collectibles by modern design advocates like Richard Wright and Leslie Hindman.

Don Schmaltz, who co-owns Circa Modern, worked at Leslie Hindman Auctioneers and taught himself about all the oddities that passed through his hands, after he was a purchaser for Salvage One, after he ran a prosperous eBay store of vintage modern goods to “thin out” his personal collection of Scandinavian and Italian pieces, after he ran an art gallery in his apartment in Lincoln Square, after he sold his car and guitars to pay tuition to attend art school at SAIC. Schmaltz has sold a lot of things over the years—maybe the video art at his art gallery was the most difficult to sell—but he has returned often to mid-century modernist design with a library of self-taught knowledge in his head and a connoisseur’s eye for the hand-crafted and the deal.

He runs Circa Modern with Jared Peterson, who was also selling modern wares online, a source of income since he lost his job as an architect, on a blog he called Circa. Although Schmaltz and Peterson sometimes have different taste in objects, their combined inventory of international and American design, with an expansive date range stretching back into the late 1920s and even some contemporary items like glass décor, makes the shop a fascinating collage of hand-picked, historically innovative shapes and forms. Says Schmaltz: “I tend to buy more obscure architects’ works that are not always easily recognizable to my customers but that I feel are less common and great investments such as the late Maarten Van Severen.”

Laura Davis, who is married to Schmaltz, comes into the story when she came into Schmaltz’s apartment art gallery one day in 1998. The gallery was called Dupreau. “As soon as I walked in the door he asked me if I was an artist,” said Davis. She exhibited at Dupreau, and then they dated, and then she moved into the apartment behind the gallery space and helped run it, in 1999. They decided to close the gallery to save money while Davis went to graduate school at the University of Chicago, in 2003. Davis is now on her way to a successful career as a sculptor. She teaches at SAIC and has a solo exhibition opening May 10 at the Chicago Artists’ Coalition.

Often, Laura has pinched objects from Schmaltz’s storeroom of modernist nightstands and bookends or whatever is slightly damaged, imperfect, or fake. For several years Davis has created little theaters of domestic trinket displays with bits and pieces of modern antiques. (One will be on view at the MCA later this year in a show called “Homebodies.”) Think of your parents’ dining-room hutch filled with dusty tchotchkes. Davis has said she wants to make the type of tchotchkes that scare you. She likes the messages communicated by modernist decoration, and she plays with their socioeconomic associations. Davis grew up in Holland, Michigan, home to Herman Miller furniture. The place was overrun with the stuff. When she saw “gay guys from Chicago” come up to buy the Miller chairs and sofas, she knew there was something to it.

Davis doesn’t exhibit her artwork at the store, but what the store sells and what she makes “share a language,” she says. Looking at the objects in Circa Modern through the lens of Davis’ sculpture project reveals that mid-century modern furniture is different from the made-in-a-sweatshop, over-priced, middle-class crap that has trailed us from birth to college. We crave something a little more authentic. Modernist design is just different enough, while still allowing us the pleasure of being consumers. It’s a material culture, and we live in it.

Circa Modern is located at 1114 North Ashland