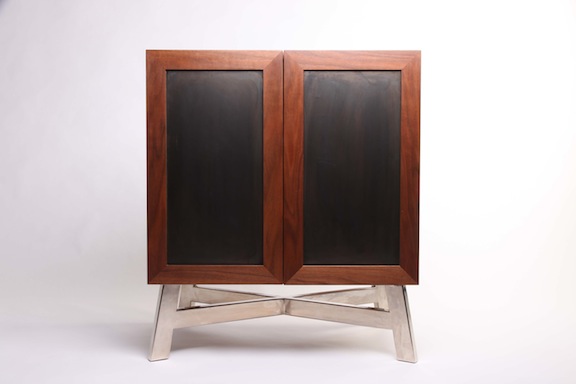 Within the 23,000 square-foot space of The Golden Triangle, a stylish Asian and European antiques store in River North, a mid-century art deco cabinet made with high gloss wood from Budapest catches my eye. It sells for $9,500. Directly across from the shiny cabinet is a pair of gleaming white armchairs with round backs. The art deco pair is 1930s, from Transylvania. These art deco pieces appear perfectly preserved, and there’s a reason why, says co-owner Douglas Van Tress. “The antiques were hidden for years behind the Iron Curtain,” he explains. Most of the store’s art deco comes from Central Europe—a virtual gold mine for antique lovers like Van Tress.

In the 1990s, China was a treasure chest for The Golden Triangle. “It’s every antique dealer’s dream to find a stash of stuff that’s not picked over,” explains Van Tress. Burma was another land of frozen-in-time antiques—apparently a bad government (think Cuba and mint-condition American vintage cars) helps.

The Golden Triangle—which Van Tress started with his partner in 1989 as a 500-square-foot store on Chicago Avenue—refers to the northern part of Thailand, where Burma, Thailand and Laos come together in a triangle. “It’s our Asian roots coming out,” he explains. And those Asian roots are unmistakable in the Golden Triangle’s present address: where Chinese roof tiles and courtyard tiles are shipped from China in twenty-foot containers to recreate an authentic look and feel. “From walls to floor it’s all imported,” notes manager Matt Nguyen. “It’s fair to say we have a high standard that makes a different environment and creates an authentic experience—that’s why customers keep coming back,” Nguyen adds. Clients include high-end designers and celebrities like Cameron Diaz and Leann Rimes.

But since about 2010—when artist Jacob Wener, creator of Modern Industry, a Chicago-based furniture manufacturer—came into the mix, The Golden Triangle has been heading in the direction of local and modern. “Due to the recession, we thought, can we buy something local?” recalls Van Tress. This was around the same time Chinese furniture making (due to stopping logging) ceased.

With the event “Made in Chicago,” The Golden Triangle focuses on good design and workmanship, done locally, with a major group show that opened on May 16. “It’s kind of full circle,” explains Van Tress.

Included in the show are four Chicago-based artists: Wener, who showcases an expanded collection of metal and hardwood furniture made exclusively for The Golden Triangle; jewelry designer Margaret J. Harris, with a collection of hand-crafted jewelry that draws upon European and Asian elements; photographer Laurel Feldman, whose bold photos of flowers are reproduced on a large scale using state-of-the-art materials such as Fuji archival crystal, metallic paper, and acrylic; and abstract painter Pamela Staker.

“I am a person in love with antiques, so we’ll still find things around the world,” says Van Tress. “But in terms of things for now, such as dining tables and chairs, we can use our antique knowledge and redirect some of the energy to locals making it today,” he adds. “It sounds really weird—what is the Golden Triangle doing with all this new stuff?” he points out. “But we’re good people to be directing new pieces,” he adds.

The devil is in the details. A sumptuous wooden dining table created by Wener is made with trees from Lake County and steel from Indiana. “Who knew?” says Van Tress. “It turns out we have a lot of trees,” he adds.

Wener thinks the term “Made in America” is great for the economy. “It gets consumers excited about American-made products again,” he points out. “My father’s generation saw the U.S. economy shift away from manufacturing, and hopefully I can see us bring it back,” says Wener.

“‘Made In Chicago’ does give a sense of pride and support,” observes Feldman. “Most of my photographic images are taken right here—you do not have to go far to capture beauty!” she adds.

Furniture could be for Chicago what organic cheese was for Wisconsin, predicts Van Tress. “There’s a mini-revolution of people who want to make things again,” he observes.

Even though it’s more expensive for Harris to make her jewelry here (as opposed to Southeast Asia), doing it locally helps support both artists and the local economy. “We must encourage and support made by hand and made in America,” she states.

“We’re just starting,” says Van Tress. “We don’t know where it’s going to go, but we have a good idea,” he concludes.

“Made in Chicago” shows through May 31 at The Golden Triangle, 330 North Clark