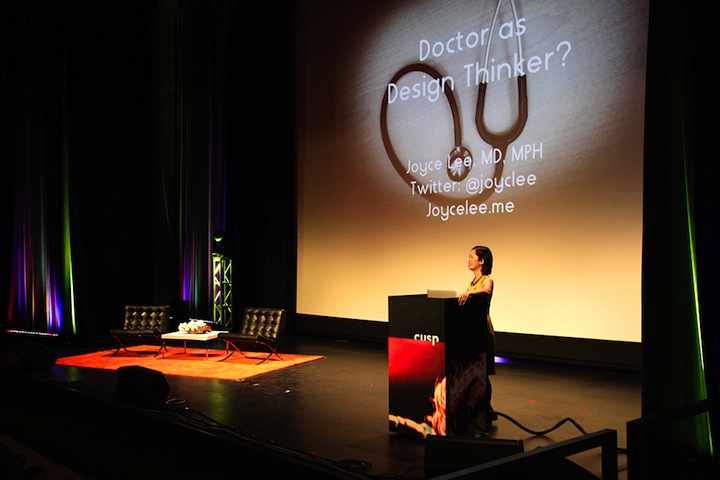 So great, so enveloping is the ambition of CUSP Conference (organized by Multiple, Inc., a “strategic design firm,” and held September 18 and 19 in Chicago at the Museum of Contemporary Art), that it overtakes us all—designers graphic and industrial, young and old, architectural and digital, those whose methods are orthodox, those whose pants are skinny, and those who, by any other standard, are designers not at all. In an empire of design, everyone turns out to be a designer. CUSP is about the “Design of Everything.”

Still. CUSP isn’t an empire, nor a cult. It may be something of a priesthood, if pediatric endocrinologist, researcher and self-professed “little bit of a tiger mom” Joyce Lee tells the story. What kind of priesthood? One in which “men in black turtlenecks” work on “very small things.” That may describe a number of professions, but designers come to mind among the first.

Dr. Lee herself isn’t a designer but a “design thinker.” A design thinker is to a designer as a theologian is to a worshipper—enlightened observer, not faithful doer. In her job as a researcher at the University of Michigan, Lee became aware that the medical system, like a prudish aunt, tends to characterize behaviors it doesn’t approve of as “patient problems.” Not taking prescriptions as prescribed? Patient problem. Recurring ailments of the lower viscera? Patient problem. Dying? Patient problem, definitely.

Framed as design problems, however, they become manageable, optimistic even. Lee’s six year-old son has severe allergies to things that are both severely common and severely delicious: eggs, milk, butter and more. His preschool supplied a blank form that resembled a treasure map; Lee filled it out but had reservations about the form’s usefulness. To help caretakers and peers in preschool deal with her son’s dietary restrictions and respond to emergency situations, Lee transformed a patient problem into a design problem: how does one tell a story about allergies? A YouTube video, drawn and narrated by a precocious kid, is a surprisingly illuminating thing. When it was broadcast on a large screen in a darkened room, several designers in the audience wept quietly, affected by the cuteness of the kid and the elegance of the solution.

That’s the sort of mood—elated, weepy, communal and just a little indulgent—that CUSP creates. The auditorium at the MCA is in perpetual dusk. Presenters encourage attendees to get up from their seats to embrace strangers. Everyone smiles. Intermissions are “conversation breaks,” though embracing is likely to erupt mid-sentence. 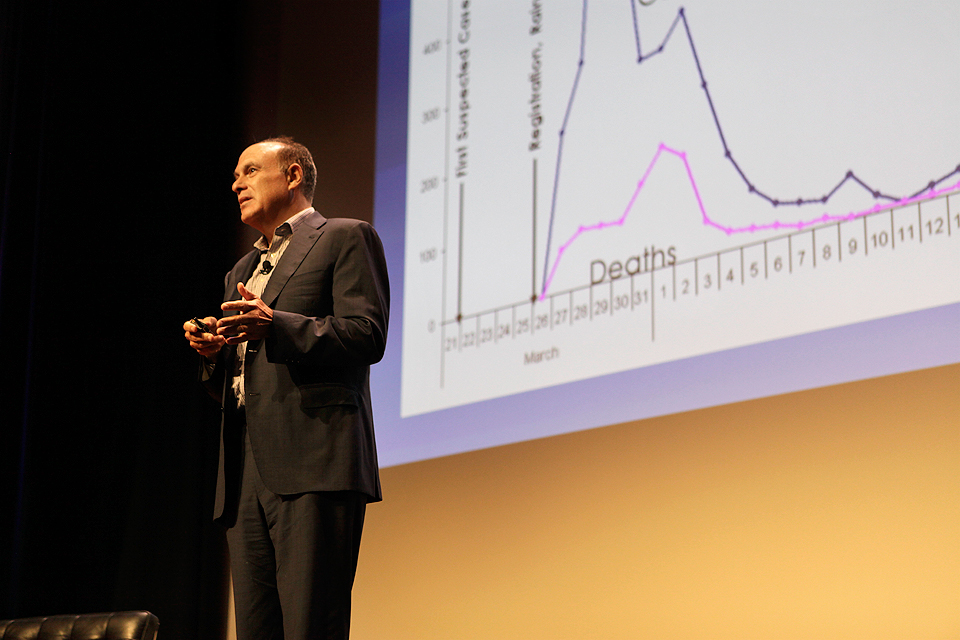 In the morning, a man in a kilt walks across the stage in complete dark, playing a battle song on the bagpipes. During a brief lull in the program, Lee accuses a fellow medical professional of saving lives. “No, you are saving lives,” says Dr. Gary Slutkin, who moved back to Chicago to interrupt gun violence after wrestling cholera in Africa for ten years. Slutkin compares Chicago’s violent crime to the medieval plague: lacking knowledge of its cause, contemporary response was “bizarre and ineffective.” Modern epidemiology, Slutkin maintains, can address violence armed with methodology, evidence and, naturally, design. “No, really. You are saving lives,” Lee says again.

Let’s not quibble. They are both saving lives, but who will save the largest collection of wooden type in the U.S.? Jim Moran will. Maybe he has already. Moran is executive director at the Hamilton Wood Type and Printing Museum, located in Two Rivers, Wisconsin, which is exactly in the middle of nowhere. 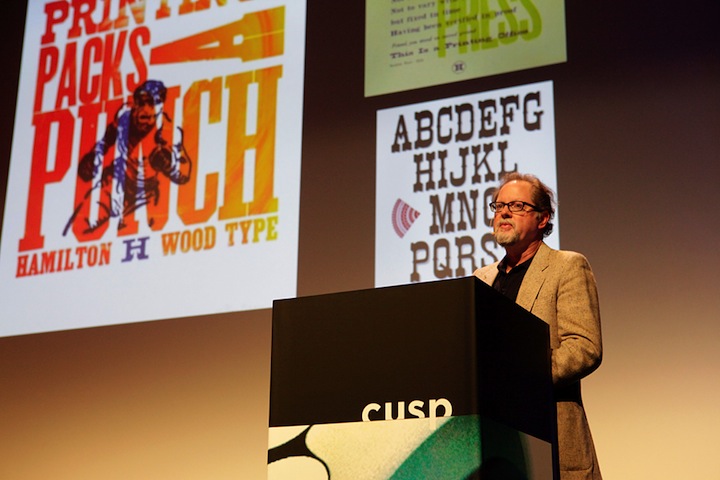 Moran, a former printing man himself, found a calling in a leaky former manufacturing plant where type blocks were once carved out of wood by an army of hardy Wisconsinites. The blocks were used for display headlines in all major U.S. newspapers and in posters, advertisements, leaflets and just about anything else in the pre-postmodern media landscape.

Moran can’t tell you which of the blocks were used to print which headlines, but he says that the capital letters W, A, N, T, E and D seem to have had the most wear. Digital printing obviated the need for wood type but created a working museum, which Moran has mopped, catalogued, revived and transported to a less soggy location aboard twenty-seven cargo trucks. Among his most prized artifacts is a display tray containing pristine blocks; it was used to promote the company at the World’s Columbian Exposition in Chicago. 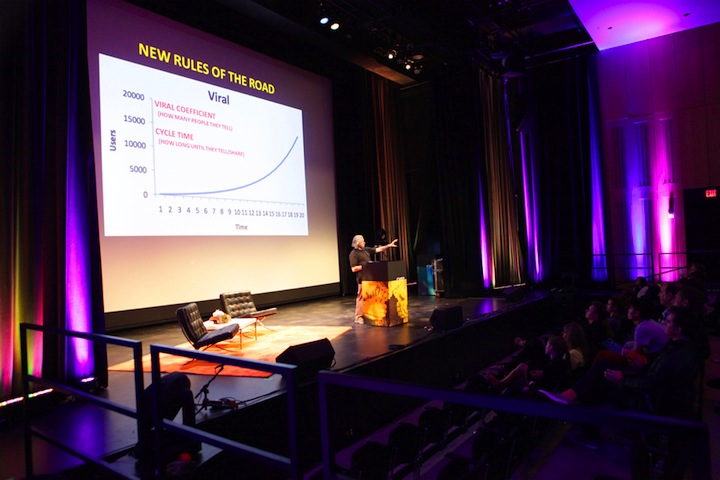 With print, whatever has been lost will never be recovered. With digital technology, nothing will ever be lost. This is what serial entrepreneur and Flashpoint Tribeca founder Howard Tullman calls “digital exhaust”: the great metaphysical problem of what happens to an email after it is erased. Traces linger long afterward, and if one were French, one would mourn the passing of the email with song, wine and a diacritical mark. But Tullman is American and he moved on to the next slide without a trace. His deck was stacked high with graphs about hyper-personalization, high-velocity computing, connectivity and something called “Mocial,” a high-speed collision of mobile and social. Even so, metaphysics came back up as Tullman mused about Google’s ability to “construct wisdom.” The next slide read like a critique of Kant: “Essential Authentic Identity.”

Warren Berger, author of “Glimmer” and prophet of the Design Generation, no doubt has the answer to questions metaphysical and merely physical. But he won’t tell. Berger insists that questions are more important than answers, though that may be a way to sell more books. Some people pressed him about it at a cocktail reception. Has he written all there is to write about the Design of Everything?  Not yet, he said. “I have to leave something for a sequel.”