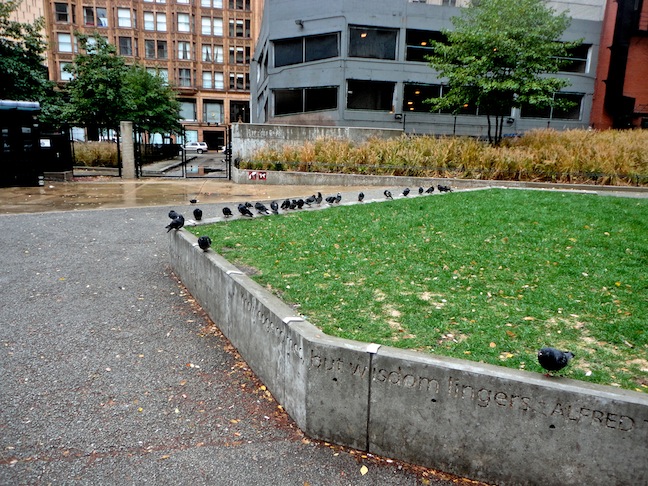 Opportunities to reinvent public space in the Loop are rare, making it imperative to produce outstanding design when the moment arises. In 2008, the renovation of Pritzker Park, located on the northwest corner of State and Van Buren, presented such an occasion. The site’s location was excellent in an area with high foot traffic from a wide spectrum of potential users. A primary goal of the project should have been to engage the multitude of pedestrians, with an interactive artistic element and innovative urban design. Unfortunately, the design of Pritzker Park went in the opposite direction, producing a passive, lightly landscaped green space. Most days, the park is lifeless and ignored.

In the middle of the 1980s, Chicago’s central library branch had outgrown its building, what today is the Cultural Center. In 1987, the city decided to construct a new library building on the southwest corner of State and Van Buren and dedicated it to former Chicago mayor Harold Washington. The library’s location was part of a broader urban renewal project to develop South State Street, still regarded as a vice district of seedy bars and brothels. Eminent domain was used by the city to purchase several residential hotels and decrepit buildings along the west side of State between Van Buren and Jackson and demolish them. On the east side of State Street were the large but vacant Goldblatt’s and Sears flagship store buildings.

With the site now available for new uses the city decided to create a park that would be a green space to complement the library and this is how Cindy Pritzker Park was born. Pritzker was former president of the library board of directors and a tireless advocate for Chicago libraries. Unfortunately, from its inception in 1991, Pritzker Park had failed to engage the public, with typical users being pigeons and the transient. In 2000, after almost a decade of little improvement, the park was reduced to a fenced-off green lawn. It stood like that until 2008 when the city turned the lot over to the Chicago Park District, which soon commissioned landscape architects Hoerr Schaudt to redesign the park.

Pritzker Park occupies an ideal location for a public space with a variety of potential users to engage. Two CTA stations spill train riders directly into the park. There are college students in adjacent buildings including DePaul, Robert Morris and John Marshall who would likely be very open to contemporary design. Harold Washington Library patrons might be interested in finding a place to sit to read a book. State Street shoppers could have a place to rest. If you add the historic Old Colony Building and the Fisher Building, Pritzker Park is surrounded by structures that create an urban room. The single but significant blemish is an unsightly alley and parking garage that impede on the northwest corner, making Pritzker Park an L-shape. Nonetheless, with Cindy Pritzker’s name attached to the park and her being the co-founder of the prestigious “Pritzker Architecture Prize,” it seemed reasonable to expect a unique, high-quality design for this bustling urban pocket park. So what did the Chicago Park District and Hoerr Schaudt deliver? An antithesis of urbanism.

Pritzker Park is a design failure on numerous levels. The park does not have a program, and offers few suggestions for user experience. It is essentially useless. There is a thigh-high elevated patch of grass surrounded by concrete that suggests to stay off the lawn. If you do climb onto the grass and sit down you feel like you’re on a stage of grass and exposed. This is not the place for a picnic—there are not even any benches. There is landscaping along the back of the park but it is so modest that it fails to even hide the alley from view let alone deliver an emotional response from nature. At its best, Pritzker Park served as a pedestal for Tony Tasset’s “Eye” sculpture in 2010. Ultimately, the lack of activity in the park makes it attractive to the people who have nothing to do.

After more than twenty years, Pritzker Park has made little progress as a public space. Despite a bustling intersection with high-volume foot traffic, the park makes no effort to engage them. Despite the Pritzker name attached to the park there is no compelling artistic or design element. Pritzker Park is a failure due to its passive design that contributes very little to the public realm. Simply said, it was a squandered opportunity.