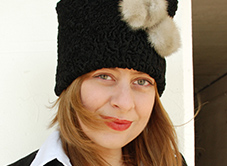 The Department of Cultural Affairs and Special Events (DCASE)’s recent Chicago Fashion Industry Town Hall at the Cultural Center, attended by more than 200 people primarily working in the local fashion scene, was a venue to celebrate successes, vent frustrations and identify ways of addressing some obvious hurdles.

Tonya Gross, DCASE’s newly appointed head of fashion, design, and culinary arts, introduced the evening by saying that a “public process” is integral to the Cultural Plan’s success. This was the first town hall held on fashion and Gross, who only recently assumed her position at DCASE, was visibly thrilled. After years in software development, Gross started her second career as a milliner and has sold her mix of whimsical and 1920s-inspired toppers at a pop-up shop at the Kentucky Derby and has her products featured on Zappos.com. “As an artist working in Chicago with a background in tech, I think I am in a unique position to tackle the issues of the city’s fashion industry,” Gross said. At breakout sessions that followed Gross’ introduction, technology and communications were at the core of many conversations.

Chicago is home to a growing community of designers. Graduates from nationally respected programs at the School of the Art Institute and Columbia College Chicago strike out on their own, work for major fashion houses, or assume a myriad of roles within the industry. Ann Hickey, Director of Program Development, pointed to Fashion Focus (Chicago’s fashion week, which takes place in October) as an example of opportunities for new designers to showcase their work. The most recent Fashion Focus featured “Urban Shapeshifters,” marking the first show dedicated entirely to menswear.

There is no lack of emerging talent in Chicago. Rather, the city’s struggle is how to keep that talent here. New graduates need a place to go for an internship or apprenticeship, somewhere to learn the business and gain experience. Without large fashion houses in the city that can offer jobs, the students educated in Chicago leave for New York and L.A., where the design and garment manufacturing opportunities abound.  In the dozen breakout discussions that took place at the Town Hall, this was cited, again and again, as Chicago’s greatest roadblock. Without manufacturers located in Chicago,  the industry has little chance for sustained growth.

Still, the spirit in the room was optimistic.  Despite the lack of large manufacturers, there are many ways that Chicago can support talent. Technology, several of the groups agreed, was integral to helping designers show and distribute their work to potential buyers. The city, one group suggested, needs to have an online forum where designers, schools, and stores can post information about sales, events and industry news. Leveraging social media to spread the work would also benefit the design scene.

One group stressed the importance of a centralized location, similar to New York’s garment district. Like the restaurant row on Randolph, “there should be an area where you know to go to find clothes made by Chicago designers,” said one participant. Tax incentives and other city support would support the development of physical retail.

A critical mass of designers and retailers in a district  may serve as a way to attract pattern-makers and sewers—professionals who are highly sought after and are spread throughout the city. Currently, when designers find a quality fabricator, they are reluctant to share that person with their colleagues. If Chicago created a nexus for connecting professionals with designers, it would break down the culture of secrecy.

As the Town Hall concluded, the mood was mixed. Yes, Chicago is hospitable to creative industries and some, such as food and technology, are prospering. Yes, the fashion scene is advancing as new fairs, shows, and sidewalk sales offer young designers opportunities to connect with consumers. But Chicago’s fashion future is hopeless until the scale of the city’s manufacturing catches up to the scope of its ambitions.