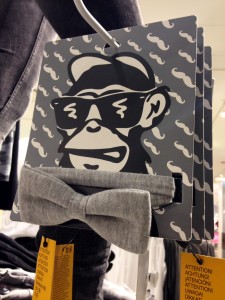 In the handsome days of my adolescence, shopping for clothes was an unambiguous business. Sartorial preferences—if you had any and could vocalize them in human language—aligned with a host of other social markers. You could extrapolate, based on a few cues, the class, occupation, political leanings, promiscuity, wealth and regional origin of someone you passed in a train station. The world in those days was a legible place, peopled by archetypes. At one end were scrawny children in Dinosaur Jr. t-shirts and chain wallets. On the other were ladies in ponchos and chunky silver jewelry. In between was a finite universe of jocks, hillbillies, Europeans, gays, preppies, posers, nerds, professionals in suits, professionals in khakis and people who just didn’t care about what they wore. The latter group, for reasons philosophical or lobotomical, consumed their fashion at Costco, along with palettes of salted butter. This story isn’t for them.

I found this narrative consistency, this one-to-one correspondence between who you are and what you wear, comforting. There were tricksters then, of course. The central con of the movie “Trading Places” is only possible because the society in which it is set trusts blindly in consistency.

In those days the odds were good that beneath a trucker’s cap and a mustache was the head of a trucker. Now, I wouldn’t be so sure. That’s because we have entered a post-“Trading Places” moment in which anyone can turn out to be anyone and everyone is free to dress like a teen. This is the moment of “Twilight,” a moment when bony buttocks of teenage boys tear through skinny jeans, in a fantasy of liberation, to become fangs and hides. It pleases me to think of this as a minor apocalypse.

A confession: I have never seen nor read any of the “Twilight” series. I have, however, been to H&M, which is presumably the same thing. I will now describe a visit to this place, in which I was a stranger.

It began innocently enough, in the basics section. Even at H&M, shirts and underpants were satisfyingly shirt and underpant-like. Beyond the unmentionables, denim shirts and velvet jackets had sired delvet hybrids. Knit hats were embroidered with the word “doggie” in all caps. An oxford shirt depicting maritime signal flags had slipped from its hanger. Was this an omen?

Heedless of signal flags, I strayed into the accessories department. There, a pastiche of masculinity mocked me: rows of suspenders, paisley pocket squares, and finally a bow tie. The bow tie itself was not enough to bring about the apocalypse. Though it was made of jersey material and though it was knotted in a way that felt both too proper and too sleazy, the tie was merely ugly. It was the packaging to which it was tethered that gave me pause. The package consisted of a cardboard placard, in glossy black. A pattern of mustaches, tips turned up like a hussar’s, filled up the background. The ‘staches, whose reign over hipsterdom is thankfully weakening, were slightly faded to frame the face of a monkey. Or ape. I have a hard time telling the difference, being a scholar not of evolutionary biology but of narrative structures. The cartoonish monkey face was accessorized with a pair of glasses, recognizable as iconic RayBan Wayfarers. Seeking shade from the sun of his native habitat, the monkey had also donned a baseball cap. Then, feeling that perhaps the sunglasses supplied sufficient protection, the monkey had turned the brim of his cap up. His disembodied head grimaced from a field of mustaches. And in the place where his neck might be if he only had one, was a jersey bow tie.

What did this mean? Was this a hallucination of a merchandiser? A printing error? A compromise of a committee whose members had been divided between mustache and monkey factions? Or—and this is painful to admit—was this just the new normal? Astute readers will remind me that this is no hallucination, but the state of postmodernity characterized by a certain flatness and synchronicity. To them, I say: If you are so smart, why don’t you appear in person at my house to hold a debate during which I will punch you in the face?

Nothing that I learned in adolescence about clothes and social norms prepared me to make sense of a bow tie. I looked at it for several long minutes in the aisle of H&M before putting it back near the “doggie” hat. It remained inscrutable. But I am no enemy of progress. Tomorrow, I will buy the monkey, along with the tie comically attached to his face, for a very reasonable price. And I will not seek narrative consistency where there is none to be found.