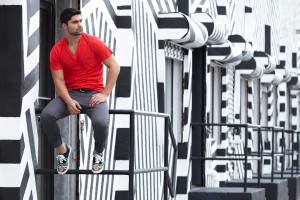 Stephens: “ We’re learning from our artists about using this medium versus a nice big flat wall.”

That Chicago has no real fashion week or centralized designer community is a frequent lament. But the city’s lack may be its greatest asset. Here, the stakes are lower and the ability to experiment with something new—or at least interesting—is a function of the city’s outsider, “third-coast,” status. One such experiment is the footwear startup Bucketfeet. Founded in 2011 by Raaja Nemani and Aaron Firestein, Bucketfeet makes whimsical shoes emblazoned with designs by featured artists. Chicago’s unpretentious, start-up-friendly climate means that Bucketfeet fits in nicely with other companies such as GrubHub and CareerBuilder. As it does for those companies, for Bucketfeet success will depend on a balance of moving product and moving ideas—between tradition and innovation.

“We want to protect our e-commerce business and make sure it’s a good portion of our business,” says Buckfeet president Bobby Stephens, “but our mission is better served if we leverage more established, more reputable distribution channels.”

In this case, “more reputable” can mean innovative pop-up shops as well as established retailers. Lucrative as digital distribution may be, physical foot traffic represents a potential new fan base that might not be scouring the Internet for artist-designed gym shoes.

Bucketfeet is pursuing both channels, and they are reputable indeed. The brand’s prime pop-up location in Block Thirty Seven has extended its deal with the still-struggling mall. And a recently announced distribution deal with Nordstrom, according to Stephens, will boost the company’s visibility and resources while keeping intact its core mission of disseminating art. “We feel like [retailer partners] can do a much better job and help us tell the stories of the artists,” Stephens says.

Even though Bucketfeet is starting to look more like a product company, Stephens insists that its future goals reach beyond just shoes. Stephens doesn’t see the brand as “old-school fashion.” Because it is still “so young and so new,” Bucketfeet is driven by a need to refine its offerings and differentiate itself from fashion innovators like Threadless.

“It’s an easy, Cliffs Notes way to describe what we do,” Stephens says of frequent comparisons to Threadless’ crowd-sourced t-shirt designs. But where Threadless typically relies on community-voted designs, Bucketfeet conducts its own talent search. With original artwork as its primary draw, the company has to maintain a consistent level of talent (such as graphic designers, graffiti writers and sketch artists), styles, and geographies while still aiming for broad appeal. For Stephens, that tension is key: “You have to be very open to new ideas, but also selective as to which one you’re going to pursue.”

For each artist-designed pair of canvas lace-ups or slippers, the design process can take up to eight months. Much of that time is spent figuring out how exactly an artwork will translate into a utilitarian shoe.

Shoes, it turns out, are a difficult art medium. After all, if iron-on prints for shoes were as easy as they are for t-shirts, we’d surely all be doing it. But it’s much more likely to find an affordable shirt than an affordable shoe. Another challenge is manipulating the shape of the shoe itself. A blank shoe, one that can be manipulated to the degree that takes place at Bucketfeet, is not easy to obtain. Rather, canvas and rubber must first be sourced and then come together to form a final product.

The company’s ambitions can sometimes outpace its capabilities. The company employs thirteen full-time staff with another three or four working part-time. For an online retailer, this compactness is typical as there is no need for frontline sales employees and managers. Still, the small staff can only accommodate a small production. The company is growing fast; the distribution deal with Nordstrom will only accelerate it.

“In the end,” Stephens says, “we do have to continue to focus on what we’re good at and why we’re good at it.” And in the end, art on shoes is nothing like art on walls. “You’re meant to live life and travel and tell  stories and engage with it rather than put it on a wall and worry about breaking it.”