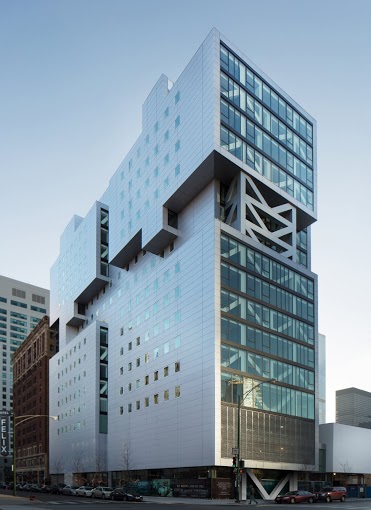 The creation of a building is rarely a smooth process. Public opposition, zoning regulation and especially the loss of financing can severely undermine a project. The newly opened Godfrey Hotel in River North is an example of a prolonged construction saga. Now that the building is complete, it faces a new set of challenges, mainly competing with other hotels. The Godfrey Hotel is just the first to debut in the local booming hotel market. Unfortunately for the Godfrey, its architecture is unlikely to be a convincing selling point.

Before it was the Godfrey Hotel, the building was designed to be an outpost of Staybridge Suites, a hotel chain targeting extended-stay and corporate guests. The project lost financing during the recession and construction stalled in 2008. The building was wrapped in a white protective fabric, earning it the name Mummy of River North. The building came back to life in 2012 when the investment firm Oxford Capital Group took over the venture. The original Staybridge Suites design was adopted because it was in an advanced stage. The building was rebranded as the flagship of a new boutique hotel brand targeting young social travelers who are in Chicago to experience the city’s culture.

The Godfrey Hotel represents a rebounding economy and hotel market. What was an abandoned project in 2008 is now a boutique hotel. The Godfrey Hotel is the first to open among more than a dozen preparing to launch in the near future. With the hotel market approaching pre-recession levels in occupancy and room rates, numerous, perhaps too many developers have decided to invest in hotels. Developer Scott Greenberg, speaking to Crain’s Chicago Business on the pending opening of so many hotels said, “I think 2014 looks good… Beyond that, it looks very scary.” The vast increase in hotels is creating concern that the market could become over-saturated with a surplus of rooms. This year alone will see the opening of Kinzie Hotel (20 West Kinzie), Hotel Indigo Chicago-Millennium Park (168 North Michigan), Soho House Chicago (125 North Green) and Virgin Hotel (203 North Wabash). Will the Godfrey be able to compete? 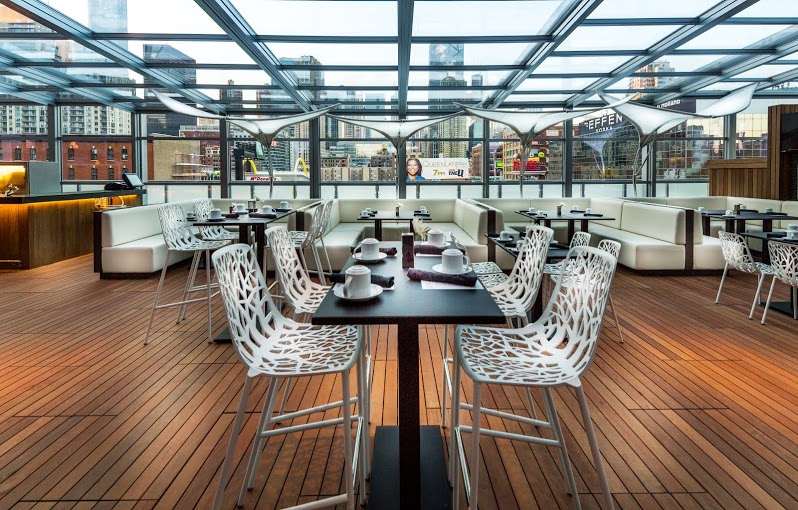 The Godfrey Hotel is not a compelling or aesthetically pleasing building. The only significant feature is the western facing façade with a modernist, industrial design of exposed triangle trusses that work both as structure and ornament. Unfortunately, the rest of the Godfrey Hotel’s architecture is lackluster. The building is more than twice as broad as it is narrow, creating an oddly proportioned bulky shape. Lead architect David Jennerjahn of Valerio Dewalt Train attempted to break up the mass of the building with a cubist style but the effort is reserved and only modestly articulated. The north side of the building has a crossed shaped indentation creating four quadrants that come off as great weights burdening the building. On the south side, a horizontal projection extends slightly out from the rest of the structure and spans the entire length of the building. The building offers little where it meets the street and the sky.

Inside, an oval lobby has a sleek minimalist design while the rest of the interiors contrast natural woods with metallic surfaces. The rooms have a gray and purple palette that mirror the building’s exterior. The highlight is a fourth floor multifunctional rooftop space with a waterfall, video wall, two-story fire pit and a downtown view.

In an era where buildings must generate buzz and project a lifestyle, the Godfrey Hotel experience lacks appeal. The gray color that covers most of the building is drab and dull like an overcast sky with its small dark blue windows being raindrops. Beyond the western façade, the building has no vertical lift and cannot overcome a sense of heaviness. A pedestrian could easily walk past the hotel without even noticing it. The Godfrey Hotel has a deficit of glitz, glamour and vibe.