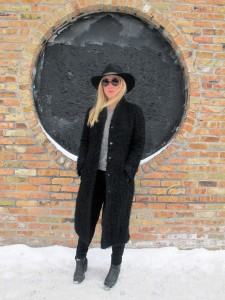 Jacqueline Hoover was walking down Milwaukee Avenue in Wicker Park.

Who is your favorite designer and why?
Favorites include Ralph Lauren, Olivier Rousteing of Balmain, and Mary-Kate and Ashley Olsen of The Row. I admire Ralph Lauren as a businessman and a designer tremendously. He began his career selling neckties in Neiman’s and continued to build a multi-billion dollar empire based on his vision of the American dream. Balmain and The Row are fashion houses that continue to excite me each season and respect pure craftsmanship and sophistication.

How did you compose this look? How long did it take you?
You caught me as I was running to Jewel, so nothing too complicated!

Do you usually wear black? Do you plan on wearing it in spring too?
I tend to incorporate black into my everyday wardrobe and it’s a color I wear throughout any season. I’m attracted to it because it’s sleek and reflects a sense of relaxed timelessness.

What is the most glamorous item you own?
My most coveted possessions would include my silver and turquoise jewelry collection gifted to me by my grandma. While traveling throughout New Mexico and Arizona in the sixties, she discovered the most beautiful pieces that I find myself wearing on a daily basis. I’m also very fond of my black knitted rabbit fur by Theory.