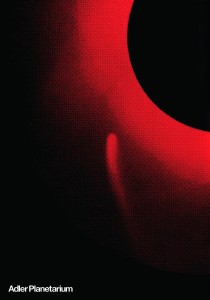 Flatmade posters are reproduced with care and fidelity

A few months ago, I started noticing a series of smartly designed posters that reminded me, just as this glacial metropolis threatened to break my spirit, that Chicago is a great city. The posters showed up in my Pinterest feed and I found them on the walls of private residences and businesses. Featuring pithy phrases, bold, expressive graphics, abstracted forms in vast swaths of unmodulated color, and a modernist typographic language, the posters identify, describe, and promote Chicago’s greatest cultural and recreational assets—Lake Michigan, the public library, Lincoln Park, the Museum of Science and Industry and more. Was this a clever ploy—perhaps dictated from on high by Rahm—to assuage those suffering from Chicago’s mid-winter malaise?

Not quite. In fact, the posters are the result of the Chicago Cultural Communication Project, an urban renewal initiative launched more than half a century ago. They remained relatively obscure until 2009, when John-Paul Wolforth, a graphic designer and art director, founded Flatmade and set out to resurrect them.

After World War II, Chicago faced economic trouble and suburbanization led to demographic shifts that civic leaders found problematic. In the early 1960s, the city responded by launching a number of campaigns that called on the talents of professional designers to attract people to and stimulate commerce in the city’s downtown. John Massey, then director of design, advertising and public relations at the Container Corporation of America, led the Cultural Communication Project, as it became known, with the aim of bringing attention to the city’s rich cultural landscape. A diverse group of designers, including Massey and fellow CCA colleagues John Rieben and William Lloyd, produced sixteen distinct posters that were to be displayed in public plazas and the lobbies of museums, businesses, airports and universities in Chicago’s Loop and elsewhere around the city.

In Massey’s poster for the Adler Planetarium, a seductive, spectral red form emerges from blackness. Only at the Adler Planetarium, it suggests, will the mysteries of this compelling abstraction be revealed. In another poster designed by Rieben, the words “chicago has two great zoos” emanate from the gaping mouth of a statuesque halftone polar bear, and Lloyd’s poster promoting the Museum of Science and Industry shows an airplane hovering precariously against an overwhelming expanse of blue. This distinctive body of work is united by a dynamic and compelling play of text and image.

But the posters were never put into production. The project ultimately “fell through the cracks,” says Wolforth, and only a small collection of originals survive today. Wolforth encountered one of the posters at the MoMA, and was drawn to both its aesthetic and, being a proud native of Chicago, message. He took it upon himself to revive the designs—he tracked down Massey, sought the rights to reproduce the posters, and identified a Montreal-based company as one of the few screen-printers capable of replicating the high production value of the originals.

Wolforth has reproduced eight of the designs in limited editions, and he intends to carry out more. He sells them to a local, national, and international clientele through his company, Flatmade, and has thus positioned himself as an ambassador of Chicago, which despite its bleak winters, has and always will stimulate great design.