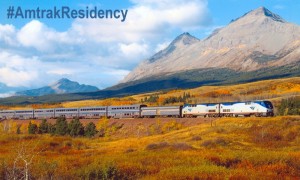 Against nearly everyone’s advice, I recently took my family on an overnight trip on Amtrak. From the minute we arrived at Union Station, I was vindicated. Unlike airlines, Amtrak called for seniors and people with young children to board first. Within ten minutes of arriving at the station, we were led by a liveried attendant to our private sleeper car, which extended to the back of the train car with windows on each side, long, couch-like seating, and little fold-down tables for coloring books and juice boxes. It was lovely.

For a small-space aficionado like me, the cars are brilliant. The closet was only six inches deep but contained a small bar that extended outward from the back and could hold a family’s worth of winter coats on the three wooden hangers, happily provided. My gigantic purse fit into a little notch in the bottom and the shelf on top safely stowed an extra pair of shoes. The concave space between the closet and the window contained a small shelf that was perfect for some wine and all the complimentary bottles of water.

Many of us owe our romantic notions of train travel to Alfred Hitchcock. Watching a sunglasses-clad Cary Grant sit opposite Eva Marie Saint in the dining car and order a Gibson martini is hot. The clever and slightly dangerous verbal seduction that follows is enough to lure us all to sleeping cars, or the fantasy of them. And yet we all know that that was then and this is now.

Acknowledging the wide perceptual gap between the fantasy of train travel and its reality, Amtrak recently announced a writing residency program to give up to twenty-four people free travel while they write. I booked my ticket before the program was announced in March, but it seems the competition was stiff: more than 9,000 people applied. Republicans cried foul over what they saw as wasted public dollars but, to lure riders and change perceptions, Amtrak needs a boost.

I offer a completely unsolicited and unsubsidized perspective. The trip was terrific! It wasn’t as glamorous as Hitchcock’s 20th Century Limited, but sitting with my little family in the dining car while drinking wine from a stemmed glass had a hint of romance. We ordered dinner off a printed menu. It had a seafood option—mahi mahi —which I ordered. Since “kid pasta” ended up being Kraft macaroni and cheese, my gourmand daughter shared my meal. My husband ordered the vegetarian pasta dish with feta and spinach. For dessert, we had Ciao Bella Gelato. The meal was served on branded durable plastic plates that mimicked china. Our debonair waiter with a Spanish accent, salt-and-pepper hair and tanned skin bore a slight resemblance to Cary Grant.

Returning from dinner, we had our beds turned down. There were four total but we only needed three: full-sized for me with a little kid-sized bed at my feet, and my husband in the single bunk above. The overnight ride was rocky and I could have used a sleep aid, but our daughter slept like she was in the womb. I can’t say that either my husband or I woke feeling rested but the full dining-car breakfast with non-stop refills of coffee made up for it.

Chicago owes its position as an economic center to a network of trains. The city was the central point of all things moving from east to west and north to south. Our population exploded in the nineteenth and early twentieth century because newcomers migrated via the Illinois Central Railroad. From the rivers to the trains to O’Hare, we’ve always maintained a dominance as a hub for getting goods and people in and out efficiently.

Prior to my trip, I had dinner with a small group which included some of the leading urban planners and designers in North America. Each reported taking children on an overnight train and spoke highly of the experience. As design professionals, they understand that the health and sustainability of our cities and regional economies is dependent on investment in the railroads to provide an alternative to the already overcrowded airlines for quick and reliable regional travel. High-speed rail has the potential to connect people and economies of cities from Chicago to Detroit to Toronto and north to Milwaukee.

The glamour of train travel may have worn out since “North by Northwest” but nothing in life is really as beautiful as Cary Grant, is it? Still, we can look back to a city’s past, no matter how romanticized, to get clues about its future. Grab your vintage Tart Arnel shades, like Roger Thornhill, and climb aboard!