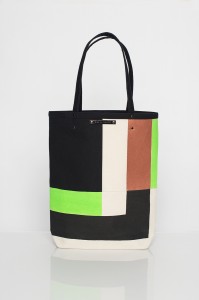 Who cares about tote bags? Designer Andrew Wayne does. The designer, a Moorhead, Minnesota native, started his designer tote-bag line, Pine & Plastic, with the premise that the everyday staple could be refined, perhaps even elegant. Wayne is ready to unleash his latest collection and, based on the success of his first, which sold out within a matter of months, he shouldn’t have a difficult time finding an eager audience.

Pine & Plastic joins a growing movement of elevating accessories we often take for granted to something of an art form. Think of how a pair of reading glasses from online retailer Warby Parker are instant showstoppers. Consider the heft of Isabel Marant gym shoes that quickly became a street-style favorite in 2012. Like those brands, Wayne, a designer through and through, is updating the tote with attention to detail, artistic vision and handcrafted construction.

Wayne grew up as an outsider in his small city. As a teenager, he embraced art and fashion as outlets. As his interests in the arts grew—he devoured everything from Celine and Proenza Schouler to Roy Lichtenstein and Andy Warhol—so too did his own work. He had his eye on the nearest metropolis, Chicago, to launch a career.

“I stayed and had opportunities,” Wayne said about his adopted hometown. “It’s a great hub for artists to start.”

Chicago is the sort of city that lends itself well to quirky, singular visions. It has been hospitable to the design duos behind new brand Remi Canarie and well-established New York Fashion Week favorites Creatures of the Wind. Like them, Wayne attributes much of his drive and success to his partner, Brett Aaron Marlow.

Marlow is responsible for the identity and marketing for the brand, and his touch is evident. The company was born after the two began dating in June 2013. Pine & Plastic, Wayne says, emerged out of a dream—literally—and Marlow insisted on making the dream real. Soon after, Wayne created patterns, sewed prototypes and had a brand name.

“When that happened, I knew we were so great for each other and also onto something great,” Marlow recalls. “Ever since, we haven’t looked back.”

The two regularly work together in Wayne’s studio. While Wayne sketches and constructs, Marlow is pounding the e-pavement, growing the brand’s awareness beyond the scope of Chicago fashion insiders.

“When we’re in the studio together, it’s like one of us is the WiFi signal radiating such high connectivity to the other,” Marlow says. “We meet in the middle, exchange a kiss, our ideas and feedback on what the other has been doing, and then get back to work in such synchronicity.”

From the start, Pine & Plastic has presented itself as a sophisticated company, one that understands its market and its potential to grow beyond Chicago. Wayne still credits the tightly knit community of Chicago fashion designers for spurring the company’s growth.

“People are really supportive and they’re willing to help out with different sources,” he says. “It’s about the community.”

True to their Midwestern roots, Pine & Plastic bags are sturdy. They immediately feel like quality, unlike the free totes that magazines send to your house in gratitude for a subscription. Pine & Plastic bags are built to withstand the Third Coast climate. With hand-stitching, studded straps and thickly lined interiors, the bags are made to be used and used often. The sturdiness does not detract from artistry.

With the first collection, “every little inch of creativity flowed through my fingers to the canvas,” Wayne said. For his second collection, he is concerned with making the totes “sellable and wearable.” But don’t expect the art to tone down: “it’s going to get more streamlined, but still have my touch on it with the colors and be fashion-forward.”