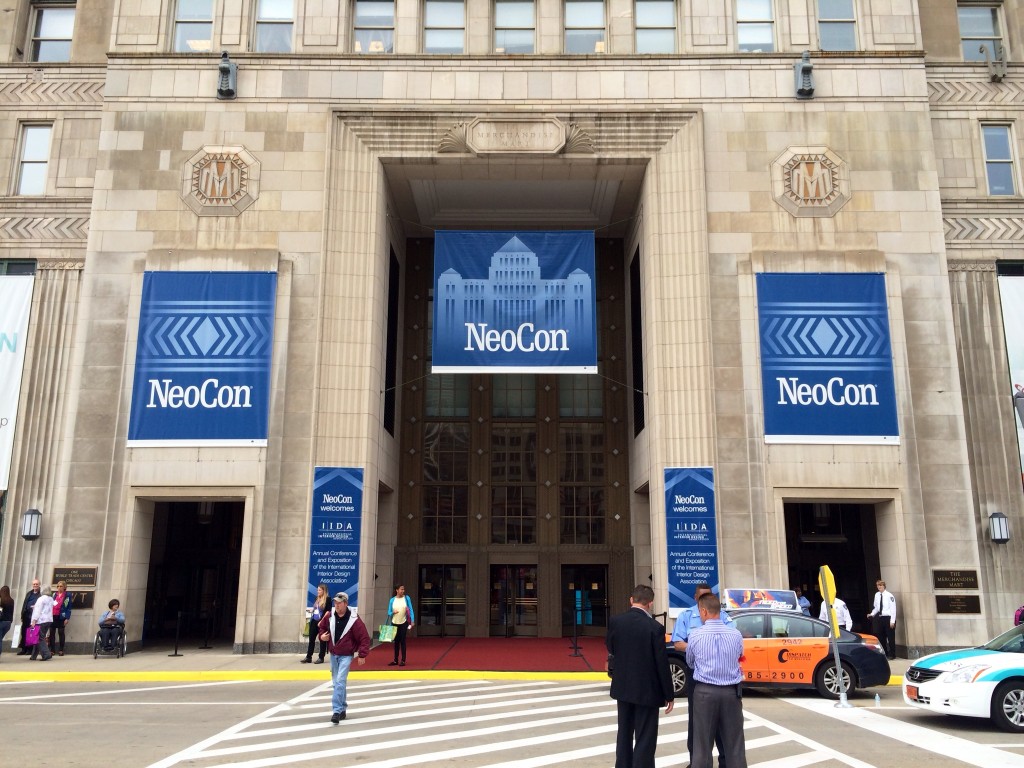 NeoCon is a three-day bender masquerading as a furniture showcase/Photo: Seth Unger

If you had a tough time getting an Uber pickup last week, it was likely because you were in cab competition with 40, 000 designers who descended on the Merchandise Mart for NeoCon 2014, the largest furniture design fair in North America. Catering to architecture and design professionals, the three-day event is a nexus of product manufacturers and vendors rolling out their newest, shiniest products and prototypes for masses to coo over, sit on, unabashedly critique, and perhaps even buy.

I went to NeoCon in hopes that I could piece together some semblance of meaning to it all—call it a pendant light at the end of the tunnel. Here are some notes from the three days of interior design madness.

Work is Less Work-y Than You Remember
If your workplace is progressive enough, your next meeting might look like a gathering of friends on a patio in low-slung lounge chairs. Your desk may become part of a system of workspaces meant to give you more autonomy to choose where and how you want to work on any given day. Throughout furniture showrooms, there was a prevailing sense that your office may begin to fuse with other, more familiar, spaces. Think your favorite neighborhood al fresco café or the living room of the most tasteful person you know.

Bringing Nature In
The influence of nature was apparent in organic shapes, earth-toned furniture and fabrics, and a surfeit of potted succulents. Interface, a carpet company and longtime proponent of using patterns inspired by nature, blended the corporate with the outdoorsy in its Human Nature Collection. Furniture maker Molo debuted the delicate, wavelike Thin Softwall. And office furnishing giants Herman Miller and Haworth both deserve kudos for seamlessly integrating a tasteful litter of plants into their showrooms. Feels like home!

Three-day Bender
The only sight more common at NeoCon than a new task chair is free booze. By mid-afternoon, most showrooms have transformed from seminars into slightly awkward house parties. Pick your spot or circulate! From remixes of Fleetwood Mac in the clubby Steelcase showroom to a hip jazz combo at Stylex, there’s something for everyone, so long as you don’t mind establishing a healthy buzz by mid-afternoon.

Dinner Plans
Once the showroom drinking winds down, the most pressing question becomes: Who are you having dinner with? The influx of out-of-town friends, clients and coworkers means a competitive supping scene. The more impressive the guest list at your dinner, the better. Take note, aspiring diners: NeoCon 2015 is June 15-17. Fire up your OpenTable account now.

Old Friends, New Friends
At NeoCon, you will inevitably meet new people, some of whom may be interesting. You may be enjoying a bottle of rosé with close friends when a visiting salesman invites himself to your table. He leans conspiratorially into your ear but neglects to moderate the volume of his voice. He may pick up the tab at the end of the night; still, be sure to weigh the benefit of a ninety minute, scream-whisper convo that keeps circling back to “an agreement to disagree.”

Mustache Madness
NeoCon’s cast of characters includes those who don’t get to experience the big city too often and a few that may experience it too much. This year’s notable fashion trends included the first documented appearance of Google Glass at NeoCon; boxy suiting paired with a mustache; and a hairstyle that was described to me by its owner as a “power part.” A power part is exactly what it sounds like. (Seth Unger)