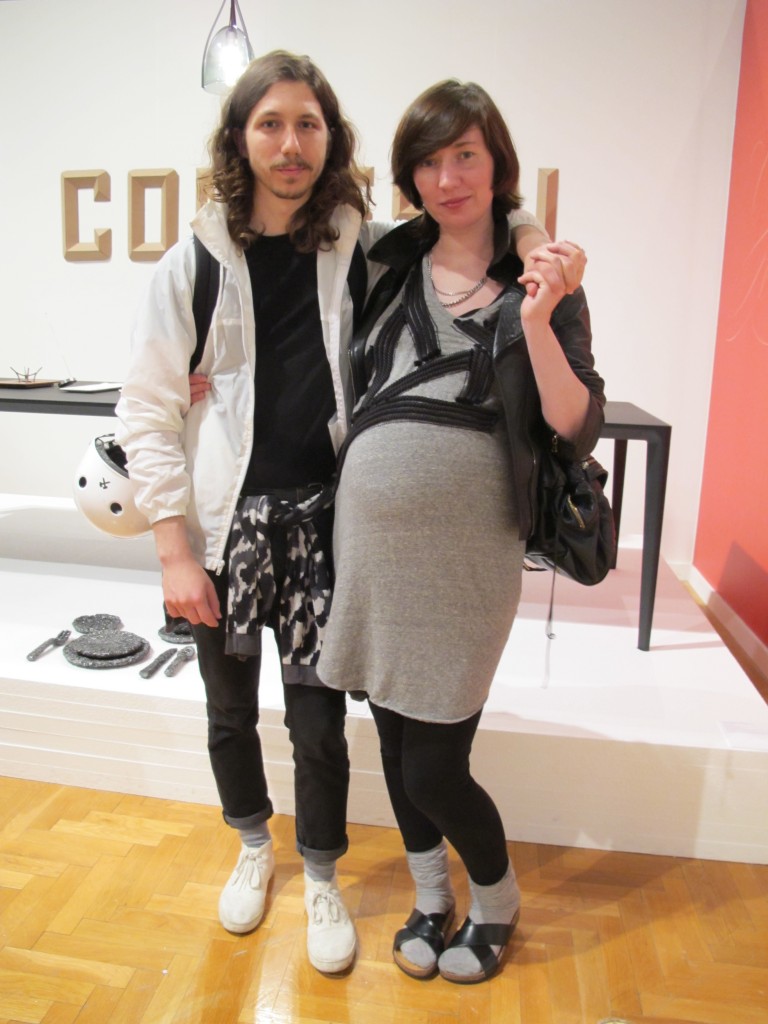 Alanna Zaritz and Gábor Hizó were attending the opening of the CHGO DSGN exhibit at the Cultural Center.

What was it like for you to dress fashionably during pregnancy?
AZ: There wasn’t a noticeable size change until twenty weeks in, at which point I had to decommission jeans for leggings. Voluminous became my keyword. In a way, it simplified dressing because the wearable portion of my closet became much smaller.

Did you buy any maternity wear or did you mostly adapt what you already owned?
AZ: Since I’ve always liked loose, slouchy silhouettes, I’ve been mostly able to keep wearing the same gear in different ways. Being thrifty, the idea of purchasing a new and temporary wardrobe was just appalling. I sort of took a Donna Karan Seven Easy Pieces approach and bought black maternity leggings, a maxi dress, a turtleneck and a T-shirt. These became layering pieces over which I could still do a cool jacket or sweatshirt. I upped my flats game, weather permitting, with crazy loafers and heavy-lug punk sandals.

How can pregnant ladies dress fashionably on a budget? Any shops you recommend?
AZ: Asos.com has an enormous maternity sale section, but nothing spoke to me. As usual, Buffalo Exchange came to the rescue, with lots of current styles in a wide range of sizes. There I found a Marni trapeze dress and Kanye-esque leather track pants. More recently I’ve found that The Second Child on Armitage carries designer maternity resale.

Who is the best designer for bigger bellies?
AZ: I need to write Phillip Lim a thank-you letter, because so many of his pieces are cut generously enough to allow for a belly. Several of his garments have helped me feel chic. The rope tank dress I’m wearing is Phillip Lim.

Gabor, do you intend to participate in the baby’s sartorial decisions?
GH: Yes. Besides being fun to dress the baby, I think it will be great to distill some of those gender biases that children are conditioned into. No pink anything, no girly Disney crap, no cutesy flower motifs. Eventually the babe will develop her own ideas of how she wants people to identify her, but I’d like to at least instill some semblance of appreciation for clothing with integrity, quality, style and sophistication. Ideally the baby’s style will be clean, enthusiastic, maybe a bit more European chic. Time will tell.