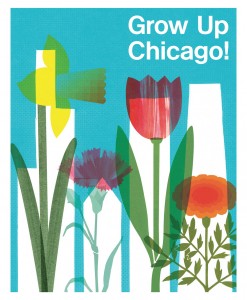 Winning poster for City in a Garden competition

Bienn – huh?
Venice may have the romance, the gondolas and the piazzas, but we have the indefatigable Mayor Emanuel, who is determined to make Chicago an international powerhouse of architecture and design. Along with an elite team that includes cultural commish Michelle Boone, Chicago Architecture Foundation head Lynn Osmond, placemaker Theaster Gates, “genius grant” winner Jeanne Gang, and co-directors Sarah Herda and Joseph Grima, the mayor announced that Chicago will host the first architecture Biennial in 2015. The event, which will take place in venues throughout the city between October 2015 and January 2016, is meant to establish Chicago as a destination for global design aficionados. During the announcement, everyone was united in support, but no agreement was reached in how to pronounce “Biennial.” Some favored the Italianate bienn-ally. Others said “Bi-annial,” as in bylaw or bicycle. Still others mumbled.

Dare to be indifferent
Emblazoned above the entrance to the new Ed Paschke Art Center is a quote by Paschke himself about his own work: “They either love it or hate it but rarely are they indifferent to it.” The new museum, which is free to the public seven days a week, opened on June 22—what would have been the deceased Chicago artist’s seventy-fifth birthday. Located in Jefferson Park, the space is home to the largest collection of the Imagist’s colorful, fun house paintings (many of which are currently on view in the center’s inaugural exhibition), and will eventually also exhibit local contemporary artists’ work and house an artist residency program.

Do or do not. There is no try.
Looks like San Francisco underestimated the power of the dark side. “Laugh it up, Fuzzball!” they’re probably thinking, because the George Lucas museum is coming to Chicago in spite of SF’s best efforts to woo Lucas to the Bay Area, though Lucas spent most of his life and career there. As the story goes, Lucas preferred the prime piece of real estate he’ll get in Chicago, which will place his museum in the grand company of the Shedd Aquarium, Adler Planetarium and Field Museum—in close proximity to Soldier Field and McCormick Place. Though Chicago is known as a great film location, Lucas has never filmed a movie here; however, his wife and chairman of the board of DreamWorks Animation, investment banker Mellody Hobson, is a Chicagoan. The Trib broke the news of Lucas’ choice early this week, reporting that the filmmaker has pledged $700 million dollars for the building and operation of the museum, whose new name will be the Lucas Museum of Narrative Art. The space will house memorabilia, ephemera, and artifacts from the “Star Wars” trilogy and other Lucas films, as well as pieces from his extensive fine art and movie poster collections. According to Rolling Stone, one reason for Lucas’ decision was Chicago’s commitment to culture, architecture, innovation and education. The force is strong with this one.

Millennium Park gets a makeover for its tenth birthday
Millennium Park might have made a belated entrance into its namesake epoch, but that hasn’t dampened its tenth anniversary celebrations. The festivities will provide Chicagoans with lots of reasons to visit the space over the course of 2014. The park’s summer film series returns, balancing blockbuster family favorites with new and classic cult films. Music and dance performances abound via the thirty-sixth Annual Chicago Jazz Festival, the sixteenth Annual World Music Festival Chicago, Millennium Park Presents, and a New Music series called Loops & Variations that mixes contemporary classical ensembles with electronic artists. The park will also serve as the setting for two new exhibitions that fete Chicago and its people: “1004 Portraits” by Jaume Plensa presents twenty-to-forty-foot cast iron sculptures of young girls’ faces, complementing the artist’s original 1000 portraits of Chicagoans that illuminate the park from his now-iconic Crown Fountain, while “Millennium Park: An Anatomy in Photographs,” showcases the park’s history and evolution in a series of images curated by John Vinci of Vinci Hamp Architects, Inc. To top it all off, the park got a new visual identity for its decennial. The new logo, designed by Jason Pickleman of jnl graphic design, is both colorful and smart. The mark positions Millennium Park among international arts and culture heavy-hitters whose identities similarly hinge on their architecture and design feats—Milwaukee Art Museum, the Sydney Opera House, the Guggenheim—by placing the park’s logo in dialogue with theirs. Says Pickleman: “There’s nothing extraneous in the final mark, and I think it encapsulates the pleasure of being in Chicago’s crown jewel.” Read more about the anniversary celebrations on the City of Chicago’s website.

Chicago is sustainability’s new poster child
World Wildlife Fund recently named Chicago the 2014 Earth Hour Capital of the United States, in recognition of the city’s efforts to reduce reliance on coal and legislate sustainable practices. Part of the awarded prize money was used to support the CITY IN A GARDEN poster contest, whose goal is to integrate design into Chicago’s urban fabric. Winning posters become public art, encouraging residents to live more sustainably, from their positions on city information panels, bus shelters and news racks in the Loop. The competition’s winners range from professionals to emerging designers; The Jury Grand Prize winners are graphic designers James Goggin and Shan James of Practise. Winners were selected by a jury whose members’ design sensibilities are beyond reproach: Philip Enquist, FAIA, of architecture firm Skidmore, Owings & Merrill; Sara Frisk of IDEO; Zoë Ryan of The Art Institute of Chicago; Rick Valicenti of Thirst/3st; Pooja Vukosavich of Studio V Design, Inc; and Karen Weigert, Chief Sustainability Officer for the City of Chicago. See all the finalists on the City in a Garden website.


The scope of architectural practices in models and movies, June 26 -September 14
The Art Institute of Chicago examines architecture big and small in its exhibition “Architecture to Scale.” Adjacent installations demonstrate complex building processes, from research to production, through the work of two architects: Stanley Tigerman, one of the great statesmen of Chicago’s postmodern architecture movement, and Andrew Zago, whose firm Zago Architecture employs a rigorous practice of research and experimentation to complement its projects. The exhibition presents models by Tigerman alongside Zago’s film series “XYT: Detroit Streets.” The former present in miniature the formal sophistication and conceptual rigor of Tigerman’s process while the latter highlights how the mechanics of representation have been writ large.