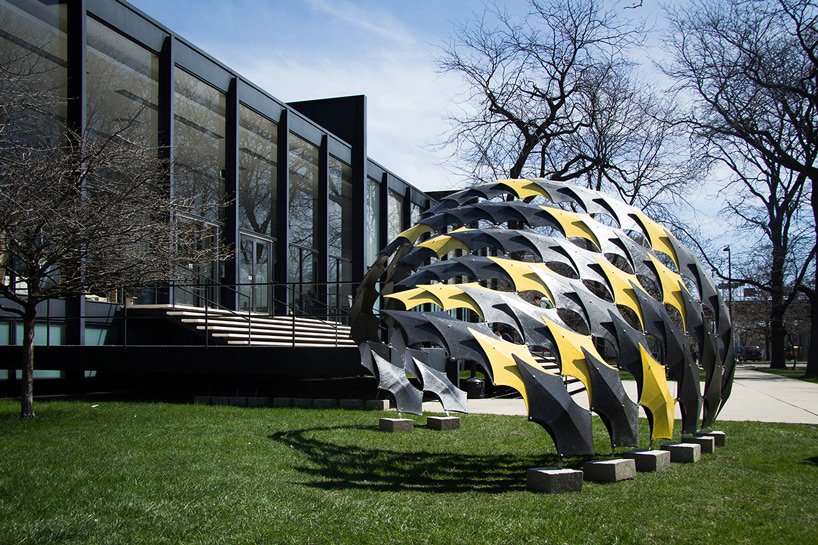 IIT Students Take Pinup Prize
Carbon fiber, the material preferred by discerning seamen for their masts, has been reshaped by an IIT design studio into a temporary pavilion. The pavilion is fabricated by using eighty-six identical fiber carbon panels, coated with epoxy and connected by cable and clips. The structure, conceived as an experiment in materiality, recently emerged as the jury favorite at Pinup 2014 competition—a worldwide showcase of emerging design. The curious are encouraged to witness this feat for themselves: the Pavilion remains on view on IIT’s campus, where it is installed in front of Mies’s Crown Hall.

Fairey-curated Happening at Block Thirty Seven: July 31 through August 4
Graphic artist Shepard Fairey, whose paranoiac OBEY campaigns are now puzzling a second generation, brings a hybrid design, music and activism platform “The Provocateurs” to Chicago in time for Lollapalooza. Staged at Block Thirty Seven, the multiday event promises a lineup of talks, performances and exhibitions. It’s a head-scratcher: Fairey as curator, Block Thirty Seven as a venue, Lolla as agent of design. What gives? One hopeful sign here is that the languishing State Street mall may be reinventing itself as a hub for design: between the new Chicago Design Museum and a growing presence of popup fashion retailers like Bucketfeet, the Block may be on to something. If Fairey’s project contributes to that story, that’s a good thing.

Jason Derulo on Runway at Glamorama: August 8
Macy’s annual Glamorama is among the social calendar’s glitzier occasions, a welcome infusion into Chicago’s mostly unglitzy fashion world. (The name of the program is a little desperate; one can’t imagine New York’s Fashion Week calling itself, say, “Conspicuous Consumption Orgy.”) At the Harris Theater, expect a runway show and performances followed by rooftop cocktails. Even though the evening is about clothes, this year’s headliner, the hip-hop heartthrob Jason Derulo, may be best known for his bare torso. Tickets run all the way up to $1,000, but $75 will get you peripheral access. That’s alright: Glamorama’s proceeds support the good work of Ronald McDonald House Charities.

Tour with Women of Architecture: August 9
That architecture is a dude-dominated scene is a frequent lament among design professionals. But the girls are certainly catching up—and they are doing it with class. To see what women architects have been up to recently, board the Chicago Architecture Foundation bus tour themed around “Women Building Change.” Studio Gang’s boat house in Clark Park is on the route, as is UNO Galewood charter school which, from some angles, looks like a super-fun waterslide. Big bonus: the one-time tour will be guided by the architects themselves.

Foundation Seeks Pitches: Due September 15
Have an idea for a monograph about mullions? A film about fenestration? An exhibition about esthetics? A dance about architecture? Pitch it to Chicago’s venerable Graham Foundation for Advanced Studies in the Fine Arts, whose grants support architecture and design related projects. The application period for individuals began on July 15, with inquiries due in September.