Design sadism
For those who enjoy seeing other people be judged, this Friday, August 22, offers the perfect opportunity to indulge, when representatives from the Society of Typographic Arts will hold their judges night for Archive 14—a juried competition for Chicago creatives that celebrates artistic expression and design excellence. The tenth annual competition invited submissions of all types from all kinds, whether representing definitive Chicago style or simply choosing to buck convention. The judges, two of whom hail from Chicago, all boast laundry lists of impressive clients and projects. We’re expecting some lively conversation. 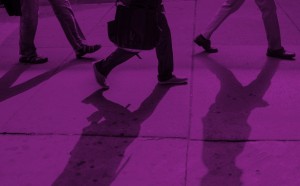 Live design critique at the Society of Typographic Arts

The Post gets it (mostly) right
This week we read an effusive article from the New York Post, lauding Chicago’s leadership in architecture and design. Although the piece begins with tiresome digs at the Cubs (really?) and our “odd” pizza (we’d just call it delicious), and tends to wax poetic on starchitect-designed structures built prior to this decade (the most recent one named is the Poetry Foundation building, a gem by John Ronan Architects that was completed in 2011) the writer gets the most important part right: when it comes to architecture and design, Chicago is at the top of its game. It’s always fun—or infuriating, depending on who you ask—to see New York outlets get fuzzy on the finer points of life in our fair city. This one makes for a solid read if you’re in need of an eye-roll and a confidence boost.

Dogs and cats living together
There are die-hard South Siders who insist the North Side is for the weak. And there are loyalist North Siders who never venture south of the Loop. But it’s worth stepping outside your comfort zone to traverse Chicago’s boundaries for two nabe fests happening on either side of the city August 23-24. The Bucktown Arts Fest is a non-profit, all volunteer-run, free neighborhood celebration of the arts that supports funding, developing, and supporting arts education programming at Holstein Park and in the Bucktown/Wicker Park neighborhoods. Meanwhile, the Bash on Wabash aims to showcase the beauty, creativity, history and culture of the South Loop. Both have long lineups of cool stuff to do, including bands, food, art and more.

Design that works
In fashion, it’s true—you bettah werq. But in art and design, it’s the WORK that counts. And Chicago designer William FitzPatrick has got that in spades. Join him this Saturday, August 23 to celebrate the release of his newest project, “WORK,” which documents FitzPatrick’s past five years of sculpture, building and design work in a handsome, perfect-bound volume. Consisting largely of sculptural furniture, the project captures an aesthetic rooted in seeking to resolve the often conflicted relationship between fine art and coarse construction. And it does a fine job. A limited first edition of fifty copies of the book will be available at the event; otherwise, snag it on Amazon. Visit willfitz.com for a preview and for more information.

Style and cynicism
The Noir City Festival is back at the Music Box Theatre from August 29-September 4, bringing you fourteen classic international noir films based around the theme, “It’s a Bitter Little World.” Focusing on the years immediately following World War II, this year’s festival features films from France, Japan, Argentina, Spain, Italy and Britain, as well as a sampling of homegrown Hollywood rarities. The goal of this year’s selection is to dispel the belief that noir stories and style are a particularly American phenomenon, and reveal that noir’s style, sexiness and cynicism crossed international borders.