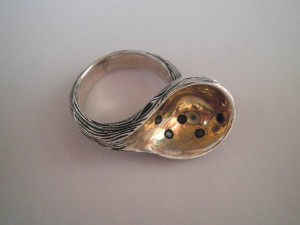 Viviana Langhoff is a jewelry designer, metalsmith, and owner of Chicago-based One Origin Jewelry. Inspired by designers such as Lauren Wolf and Van Cleef and Arpels, her studio features necklaces, rings and earrings. Langhoff’s designs represent a nexus of contemporary, experimental and natural threads in jewelry design. “I see jewelry as sculpture for the body,” she says.

Langhoff’s work may be sculptural, but it is also grounded in inspiration from Middle Eastern and Native American art and folklore. Some of the work emerges from observations gleaned during travels abroad. “One thing that I was inspired by recently was the Moroccan beach,” she says. “The colors are really vivid. Morocco can be cliché now because there’s been a huge influx of their patterns and styles, but I’ve always loved tessellations,” geometric tile patterns common in Islamic art. Langhoff minored in Middle Eastern studies while earning a BFA at the School of the Art Institute of Chicago, and was fascinated by the way that mathematical equations and religious practices come together to form decorative patterns. “If you try to avoid the literal visual representation, the idea is amazing.” 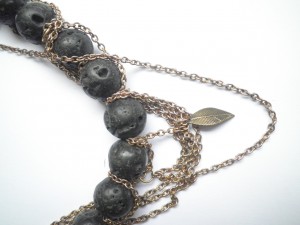 In her designs, Langhoff typically uses recycled materials such as Native American cleansed bone, cast twigs and crystallized coral that root her pieces in tradition. All metals in Langhoff’s studio are fair trade, and many are recycled. Using eco-conscious materials isn’t new to the trade, but today, designers are challenged to create a balance between traditional and alternative, or more sustainable, materials. Langhoff demystifies the sustainable trend: “I try to start out with everything being a sustainable material. Jewelry with recycled metals requires a lot of new metals as well. When you cast silver, for example, you need new silver for the recycled metal to flow.” When a jewelry designer uses natural materials like wood or bone, the design is in danger of seeming lower quality, unless silver and gold—rather than base metals—are also used. Langhoff’s ability to balance between the trend of alternative materials and high-end designer jewelry is clearly manifested in her pieces. (Audrey Keiffer)