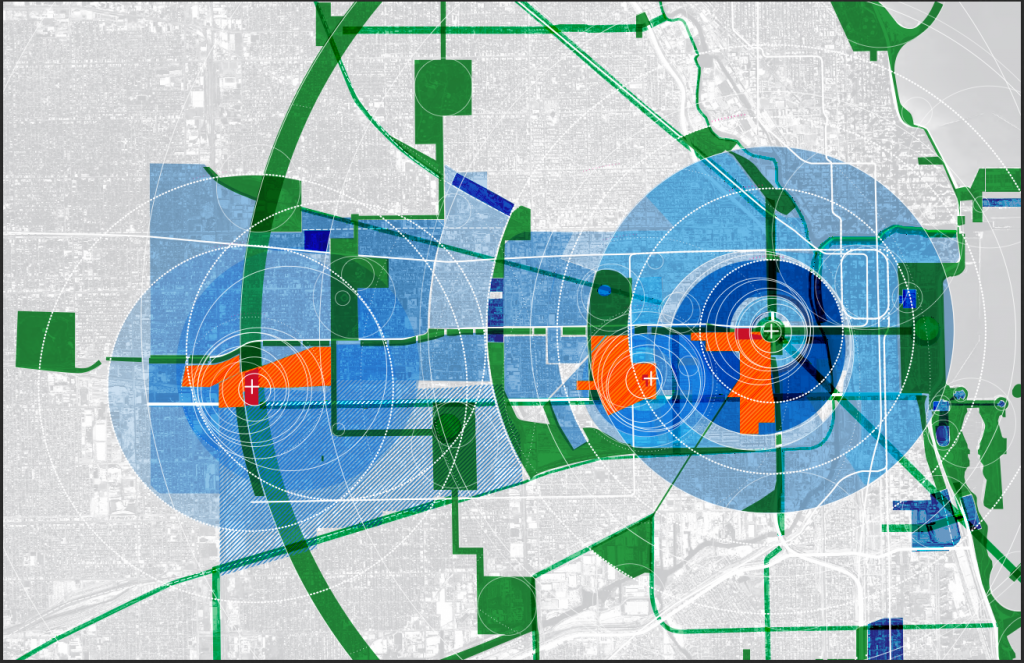 You remind me of a man, through January 4, 2015
Perhaps the true measure of fame in the twenty-first century is to become the subject of a retrospective exhibition that tours international museums of contemporary art. “David Bowie Is” opened at the Museum of Contemporary Art Chicago this month, bringing the Starman down to earth in the down-to-earthiest of places at the tour’s only US stop. Beyond his prolific musical catalog, Bowie has continually reinvented himself to remain relevant and influential in art, design, theater and culture more broadly—what child of the eighties could forget his turn as the Goblin King in “Labyrinth”? That hair! Those meggings! That bulge! Plumb the depths of the man who fell to earth’s creative impulse at the MCA, where you can view more than 400 objects including handwritten lyrics, original costumes, photography, set designs, album artwork, and rare performance material through January 4, 2015. Fifteen minutes? More like five decades. Andy Warhol, eat your heart out. Find out more and get tix on the MCA’s website.

What man, October 2, 6pm
If you don’t know landscape architect James Corner’s name by now, you must have been living under a rock under the High Line for the past decade. The Corner-designed urban park has been credited with reinvigorating the neighborhoods it runs through in New York City, bringing new development and impacting quality of life on the scale of Central Park. The High Line has even opened the doors for other cities to rethink potential uses for aging and abandoned infrastructure—including our own Bloomingdale Trail aka the 606. Commissioned to redevelop Chicago’s Navy Pier for its 100th anniversary in 2016, Corner is now hard at work on our shores. Corner shares his vision for livable cities at the Reva and David Logan Center for the Arts on October 2, when he presents “The Ecological Imagination: Life and the Design of Urban Public Space.” The talk marks the Frank Lloyd Wright Trust’s fourth annual Thinking into the Future: The Robie House Series on Architecture, Design and Ideas. Admission prices range from $5 for students to $25, with a cocktail reception at 5pm. Hit up the website for more info.

The man with the power
This month, the Barack Obama Foundation narrowed down its choices of possible homes for the Obama Presidential Library, eliminating nine contenders to reveal four still in the running—two of which are here in Chicago. Among the nine rejected locations was one in Bronzeville developed by HOK to place the library where the Michael Reese Hospital once stood. Another rejected proposal, also for the South Side, was designed by SOM as part of the planned $4 billion Lakeside development. Though the foundation revealed it would like to see detailed proposals for sites at Columbia University, the University of Chicago, the University of Illinois at Chicago, and the University of Hawaii, it didn’t let on who might design the building. In the end, Obama could pair any site with any architect, including heavies Renzo Piano,Thom Mayne, Jeanne Gang and David Adjaye, considered the frontrunner by insiders. The remaining candidates have until December 11 to submit detailed proposals. Read more details at Architectural Record and Curbed Chicago.

What power, October 10-12
Columbus, Indiana, is attuned to the power of good design: the city of 45,000 boasts a strong architectural legacy. A veritable Midwestern mecca of modernist structures, Columbus is home to buildings designed by the likes of I.M. Pei, Eero and Eliel Saarinen, Cesar Pelli, Richard Meier, Harry Weese, Robert Venturi and James Polshek. To celebrate design in Columbus, a coalition of arts advocates will debut a new site-specific installation that pairs a designer with a landmark structure. The first such piece, by Jonathan Nesci (named one of Chicago’s fifty top designers by this magazine) is called “100 Variations: New Reflections on Eliel Saarinen and the Golden Ratio.” It features one-hundred mirror-polished aluminum occasional tables installed on the sunken courtyard lawn of First Christian Church, paying homage to the “Golden Ratio” that Saarinen used in the interior and exterior of the building. Check out the installation October 10-12. Learn the deets on Facebook.

The power of voodoo, October 14-19
Fashion. It casts a spell. It expresses who we are. It influences our productivity. It subtly informs people’s perception of us. It’s basically voodoo. Discover Chicago’s practitioners of this dark and fabulous art during Fashion Focus: Chicago’s Fashion Week. Produced by the Department of Cultural Affairs and Special Events, Fashion Focus is billed as a citywide celebration of Chicago’s fashion industry designed to foster and elevate the business of fashion in Chicago. Highlights include a Fashion Town Hall and networking event for industry professionals; runway shows at the Chicago Cultural Center and in Millennium Park showcasing the latest trends, emerging and established designers; shopping events; and more. There are so many goings-on it’ll make your head spin, so apply some hairspray before you check the website.

Who do
There’s something magnificent about powerful dudes duking it out over building signage on the Chicago riverfront, isn’t there? When our city’s venerable architecture critic Blair Kamin wrote that the huge stainless steel letters on Trump Tower could destroy views and disrupt enjoyment of the Chicago Riverwalk, Rahmbo and The Donald both took notice. In a statement, Emanuel said the sign was “architecturally tasteless,” to which Trump responded that people love his sign (who are these people, exactly? I’d love to meet them). This month, the mayor took action to stem the sign wars and ensure no future builder tries to match Trump’s hulking, humongous—dare I say hideous—2,900-square-foot sign. Under the new ordinance proposed by Emanuel (reviewed in detail elsewhere in this magazine), signs would be small and many kinds of rooftop, flashing and neon signs would be banned. Of course, none of this will affect Trump’s sign. You win some and you lose some…. unless you’re Trump, in which case you always win some.

You do
Speaking of Blair Kamin, he penned a recent article including major architectural events to watch around Chicago this fall. Plans for the Lucas Museum of Narrative Art will be made public, the first phase of the twenty-seven-acre Maggie Daley Park will open, UChicago will welcome students to their newly renovated economics department and Becker Friedman Institute for Research in Economics in the former Chicago Theological Seminary building, IIT will rededicate their campus’ Mies-designed chapel, Northwestern will unveil its new visitor center, Navy Pier will start getting a facelift in preparation for its centennial, the Auditorium Theatre will celebrate its 125th anniversary, and lectures aplenty will be in the offing. Read more on the Tribune website (if you can—a subscription is required. Isn’t that frustrating?) 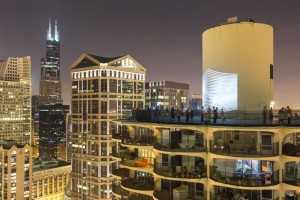 I do what, October 17-20
The one thing that bothers me about Luftwerk is that the pronunciation key of their name on their website incorrectly guides phonation of the German word “werk,” whose “e” should sound more like the one in “yes” or “pet” (ĕ) than the one in “jerk” (û). But what doesn’t bother me about Luftwerk is everything else, because their work is genius. Last month, the artistic duo teamed up with MAS Context to create a singular event featuring a site-specific video and light installation on the rooftop of Marina City’s west tower. A light installation projected onto water, produced in partnership with the Chicago Loop Alliance, followed. And from October 17-20, the duo continues their recent work highlighting and interacting with iconic architectural design through an installation called INsite at The Farnsworth House. I wish I could point you to more info, but their website doesn’t have any. Okay, so there are two things that bother me about Luftwerk.