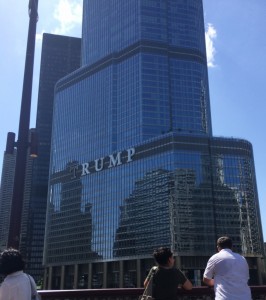 Last week, Mayor Rahm Emanuel announced that he would propose an ordinance creating the Chicago River Corridor Special Sign District. The intention behind the district is to limit the ability of future signs to visually pollute the landscape located along the city’s emerging riverfront playground, as Donald Trump’s massive 2,891 square foot sign did when it was unveiled this past summer on his eponymous building.

The district will encompass the whole of the Chicago River’s downtown expanse, running from Roosevelt Road on the south to Kinzie on the north and Lake Shore Drive to the east. In a prepared statement, Emanuel said, “As we move to transform the Chicago River into Chicago’s next great waterfront, we want to ensure that the riverfront is protected from signage that negatively impacts the visual environment.”

Built into the ordinance are stipulations that require signs to be placed directly below the highest roof line of the building, adhere to a maximum size of 550 square feet with a height of 500 feet or more (Trump’s sign looms just 200 feet above ground) and employ, according to the City’s press release, “only ‘halo-lit’ lettering, back-lit letters that create a glow of light around the letter by illuminating the wall surface from within.”

In other words, everything the Donald’s sign is not.

Emanuel isn’t pulling an about-face with the creation of the district. Although some have been quick to deride the move as reactionary considering his administration okayed the Trump sign, Emanuel was in fact signing off on a Daley-era deal. And really, the ordinance simply codifies additional types of land use and/or zoning restrictions to set standards for future development. As the Chicago Tribune’s Blair Kamin, one of the more vociferous opponents of the sign, wrote of the ordinance, “Local governments typically regulate how people use land, including how they display signs. The key is establishing standards that are objective, equitable and consistent.”

Consistent is the key—and tricky—word here. While the ordinance may serve as a corrective for this particular sign-related issue, the mayor’s actions expose the vulnerable logic embedded within the neoliberal framework in which he governs.

In the vaunted pursuit of “world-class” status for the city, Emanuel has shown himself quick to find ways of maximizing efficiency, be it data -, economic – or otherwise-oriented. Because this Bloombergian brand of neoliberalism applies and responds to conditional market forces, and because its undergirding concern—the flow of capital—is in constant flux, its logical frame too tends to be flexible and pragmatic.

Here, market-driven flexibility and the ideal of consistency are at odds.

Early in Emanuel’s tenure, in a justifiable attempt to plug the $635.7 million deficit he inherited, the administration sold advertising space to Bank of America on the Wabash Avenue bridge-tender houses for $4,500/month. At the time, an Emanuel spokesperson told WBEZ Radio that the municipal marketing scheme would be accompanied by policies “to protect the integrity of Chicago’s facade.” The repurposing of the riverfront, an ambitious undertaking that aims to change the utility of Chicago’s river from a transportation route and industrial sink into a recreational vehicle, will only be fully realized with public-private partnerships. The signage debate will reemerge in the coming months as the city develops and negotiates branding for potential private partners who underwrite the riverwalk development.

The hunt for private dollars to fill empty public coffers or implement full-scale public works isn’t an inherent ill. But it lays bare the vulnerability of Emanuel’s logic. There’s a sense of capriciousness to restrict the private elements of the public realm—that is, the public-facing façade of a private building—while at the same time, when necessary, selling the public realm to private bidders.

A full picture of the Trump controversy appears when viewed across three dimensions: the aesthetic, the public and the political. The distasteful aesthetics of the Trump sign spurred the initial, almost reflexive outrage among the public, leading directly to Emanuel crafting the ordinance as a political Band-Aid. All politics respond to the public, but like the incongruence of those five twenty-foot-tall LED-lit letters resting against the cool glass grace of its namesake building, there’s something discordant about this policy fix.

Unless its true aim is for a  normative design standard that is applied across the board, the ordinance illuminates that the only consistency found in Emanuel’s playbook is that of expediency.