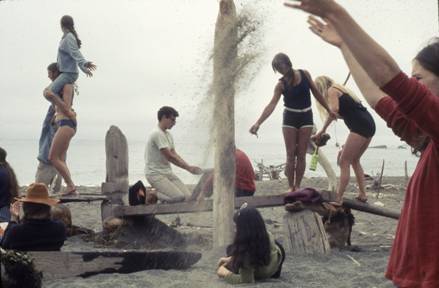 In the late 1960s, a prominent landscape architect and an avant-garde dancer came together to lead cross-disciplinary workshops near San Francisco. The series of experimental creative exercises are chronicled in videos, photographs, artifacts and ephemera in an original exhibition at the Graham Foundation, on view through mid-December.

“Experiments in Environment: The Halprin Workshops, 1966-1971” documents Lawrence and Anna Halprin’s efforts to challenge traditional ideas of aesthetics, creating generative spaces for open-ended operations rather than finished artworks. The Halprin Workshops emphasized experiential creative enrichment over application. A set of instructions for one workshop includes, for instance, “Buy yourself a present in a place of fantasies and act accordingly.” Environmental designers, architects and dancers from around the world attended the workshops, learning completely new approaches to artistic practice that presaged much of today’s experience-based art.

The exhibition alone does not attempt to situate the Halprins’ Workshops within the larger background of social, artistic or environmental fervor characterizing the generation of the Workshops’ participants. It is drawn from a large archive of Lawrence’s files, photographs, films and drawings housed at the University of Pennsylvania, where he taught in his later years. “Experiments in Environment”’s context is instead in a series of events around the exhibition that illustrate the extent of the Workshops’ influence. The first of them is a presentation by Chip Lord, co-founder of experimental architecture collective Ant Farm and a participant in an early Halprin Workshop.

Each of the workshops was held over several weeks at Sea Ranch, a coastal community outside of San Francisco, or the Halprins’ home in Marin County, both designed by Lawrence. The care with which he figured the natural landscape into his projects is especially evident in architectural drawings and illustrations, some of them on public display for the first time, in the exhibition. Considered pioneering forays into sustainability, the workshops constantly sought new ways to consider the natural environment in artistic practices, using driftwood, for instance, to build structures and beach sand in dance cycles.

Lawrence Halprin built a “Dance Deck” for his wife at their home, which incorporated and responded to the existing trees rather than removing them. It was the first time she danced on a surface that was not rectangular, which she has said had a great impact on her practice as a dancer. At a time when the Fluxus art movement had great momentum (Anna traded scripts for performances with Yoko Ono, who wrote the first anthology of the New York Fluxus scene), Lawrence’s plans for Sea Ranch were also anti-commercial, integrating the natural coastal environment rather than paving it over like the condominium developments that followed.

The exhibition at the Graham is one of the few times these archival materials have been presented for viewing, and the Halprins’ work manages to retain a quality of contemporaneity more than forty years later.

At the Graham Foundation, 4 West Burton Place, through December 13