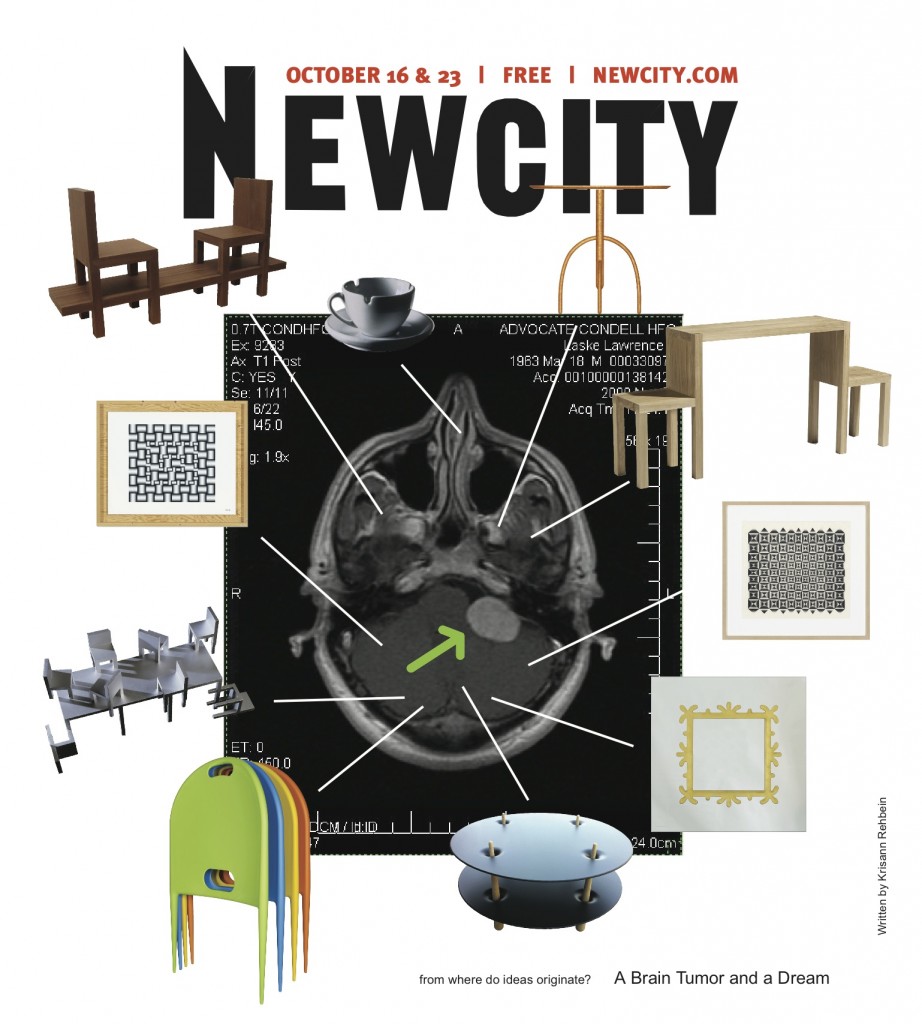 Lawrence Laske’s hand made the motion of a winding river, cutting through the air to illustrate the meandering flow of his conversation. Just like Tarantino, he said, he’d “bring the story back around eventually.” We are sitting in an office of the auction house Wright to talk about an upcoming auction of Laske’s entire body of work. The output of his strange and prolific twenty-year-long adventure in industrial design will be up for sale to the highest bidder on October 24. Nearly 300 lots comprise an auction titled “Lawrence Laske: Design Studio and Collected Works,” which represents work dating from the years before a cancerous tumor was removed from his brain. Now, Laske is moving on by giving it all up. And giving a lot of it back.

After an enviable career that spans more than two decades of design, Laske has an extensive body of work that tracks his collaborations with some of the leading figures and ideas in late twentieth-century design. A flashback reel of his career might look suspiciously like the movie “Forrest Gump,” whose protagonist always managed to be at just the right place at the right time. Look: here is Laske at the threshold of prestigious Domus Academy in Milan, the only American in his class. Here he is shaping an iconic object for postmodern furniture-maker Memphis. Here he is sketching ideas for design-industry heavyweights Steelcase, Knoll and IDEO. Here he is working in France with renowned architect Philippe Starck. And now, here he is at a premier auction house, surrounded by drawings, sketchbooks, prototypes, patents, scale models, technical drawings, objects of inspiration, remnants of collaborations, and gifts from famous friends: the totality of his life. 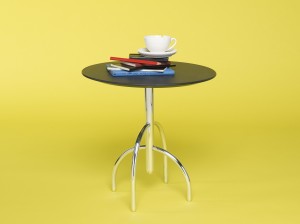 Lots at the Wright auction include Laske’s most recognized pieces, like the Cactus table for Knoll

In the last decade, Wright has become one of the nation’s top-performing and most respected dealers of twentieth- and twenty-first-century design, competing with established houses like Christie’s and Sotheby’s. The company has a loyal staff of creative people—including writers, art historians and fine artists—who are genuinely passionate about design and committed to the trade. With this auction, whose proceeds will be donated back to Laske’s charity, Wright is taking a risk. To auction work of a living designer is unusual in the first place; to auction the work of a living designer who isn’t exactly a household name is a risk indeed. This is a new kind of sale and it took nearly two years of Laske asking Wright’s senior vice president Michael Jefferson for an auction before he agreed.

Partly, Wright agreed to take on the project because Laske is a local boy, an unsung hero of the Midwest. Partly, it was because of the challenge of figuring out how to organize and present Laske’s unruly archive. But mostly, it was because Laske has a persistence that makes all sorts of things possible and the fortitude to ask for something over and over, without taking no for an answer. This trait led him to apply to Italy’s prestigious Domus Academy after he graduated with a degree in Industrial Design from the University of Illinois. It helped him integrate himself into Italian design society and to work with his heroes. Laske is unlike anyone I’ve met. He literally thinks it is possible to meet anyone he is interested in talking with. And so far, he seems to be right.

Laske moved to Italy to meet the man he saw in a back issue of Time magazine he found at his parents’ house in Libertyville, Illinois. In 1985, he saw a photo of Ettore Sottsass standing behind the now-iconic Carlton room divider he created for the Memphis Group. It was nothing like Larry had ever seen. Founded in 1981, the Memphis Group pushed the boundaries of design with often outrageous combinations of color, form and function. Shortly after Laske moved to Rome to attend Domus, he met Sottsass and was almost immediately offered a job with his studio, Sottsass Associati. At twenty-three, and before graduating Domus, a kid from Chicago’s suburbs landed smack in the middle of Milan’s postmodern design universe. 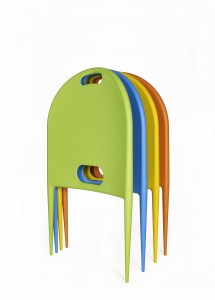 With the blessing of Sottsass, Laske was welcomed into Italian design society. Shortly afterwards, he was given the chance to design furniture for the 1987 Memphis Group show. Like many of his projects in subsequent years, the two furniture designs selected by the show’s curator Barbara Radice did not make final production. But on the strength of his prototypes, Laske was later invited to create a lamp for a Memphis show on lighting. The invitation was thrill enough to temper the disappointment. Looking back, Laske notes that while he has come in second many times, he lost only to the greats. “If you’re going to invest in an Olympian,” he advised me, “go for the Bronze, because he represents potential. The Gold has already hit his peak.”

The majority of the auction is the representation of Laske’s process. He claims that he doesn’t follow a traditional design process and has never had a brief. Rather, he is an inventor in the mold of his grandfather, whom Laske greatly admires. Semantics, maybe. Laske invents products that solve problems and he does it constantly. He’s so committed to his designs that he often fabricates his own molds, has custom craftsmen build prototypes and, in rare cases, has a former student produce computer renderings. The cost of fabricating his own molds can add up and Laske has to invest a fair amount of his earnings back into his designs. He is singularly devoted to feeding his own creativity.

Despite thinking of himself as an inventor, Laske often behaves more like an artist, content for the drawings to speak for themselves. In a way, they do; Laske’s sketches are lush and evocative, full of detail but still abstract enough to communicate a big idea. In fact, most of the drawings for sale in the Wright auction did not result in finished products, but are sketches, technical drawings and models of things that never reached production. And as such, they occupy an unusual place in the market. For example, a lot featuring Aluminum Lamp No. 3 model and drawings offers the full range of his design process, along with a narrative about how Sottsass provided feedback that led to final iterations. What Laske lacks in finished product, he makes up with an incredible diversity of stories and sketches, prototypes and ideas, companions and collaborations. The collection of Alessi Design Museum includes a series of ashtrays designed by Laske in partnership with Philippe Starck, but you won’t find them in an Alessi store. 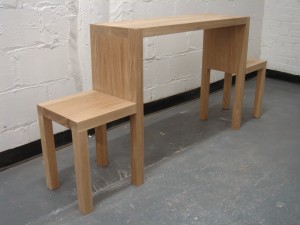 Sometimes, the results of his collaborations are fantastical, bordering on vulgar. One curious item is the prototype of a lamp Laske designed with Ingo Maurer. It is a thin aluminum rod, standing on two legs, and balancing by a rubber weight that looks exactly like a scrotum. To turn it on, lightly tap the bottom of the sack. The lamp is aptly called “Testi Laske.” Laske says that Maurer wanted to call it “Larry Laske by Larry Laske” but these days, it is known affectionately as “cough” in reference to a doctor’s physical exam. In the auction, the prototype is being sold with sketches and the mold to make the weight—a piece alone worth thousands of dollars. The lamp was never produced; Maurer’s wife told him to stop working on the project. It didn’t make money, but it makes a good story, complete with crude laughs and hand gestures.

But there are completed objects for sale in the auction as well, like the sole prototype of the Saguaro Cactus Table for Knoll. For the table, produced as part of the Cactus series for NeoCon 1993, Laske produced full-scale drawings for Knoll in the manner of his mentor Ettore Sottsass. The drawings for the Knoll table are of unbelievable precision and elegance. Laske says his line weights are so exact, they can be measured within an eighth of an inch. His technical drawings are so finely detailed that they nearly look digitally created. Several drawings of this type are included in the auction at Wright; although they are relatively recent, they evoke a distant, and perhaps dying, art and vocation. 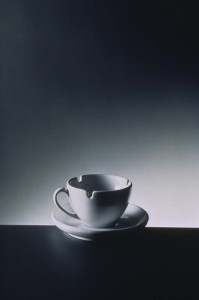 For Laske anyway, the unfinished objects symbolize potential. He hopes they land in the hands of students who can be inspired by them, perhaps, or investors who can realize the economic potential in taking them to market. Whether Wright’s buyers are the right match for that type of investment remains to be seen. Like an open-source design process, he wants someone else to do what he hasn’t done: finish the things. While some of the lots, like Sketchbooks no. 8 + no. 9, are rich with concept sketches for furniture, lamps and useful hardware, other lots contain the elements of a complete product. The patent, tooling and complete drawings for his award-winning Beach Thingy—a wonderfully simple concept for a beach chair—are for sale. The original production batch sold out on Fab.com in twenty-four hours and was immediately reordered, selling more than 2,500 total.

In the past few years, Laske has had a lot of time to think about his life’s journey. In 2009, he was diagnosed with a cancerous brain tumor. He was suddenly faced with the reality that his creative engine, his imagination, had been invaded for the previous twenty years—his most productive years as a designer. Facing death, he told himself that if his life was going to end at age forty-seven—at least he had lived it with gusto. He globetrotted with famous designers, hiked the Austrian Alps, raced cars in the streets of Lake Como, and took holidays in Martinique. It is the kind of life that, when seen in the pages of Wallpaper magazine, lures young creatives to the design field. 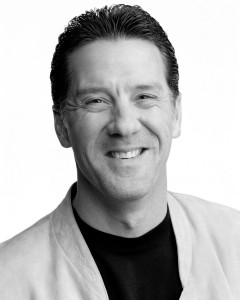 After a surgery to remove the tumor, and during the long recovery, Laske effectively ended his career as a professional product designer. He wants the second half of his life to be about creating a design-education utopia reminiscent of his experience at the Domus Academy. The proceeds from the auction will support Laske’s new dream: to transform a centuries-old church in Caltabellotta, Sicily, into a place where design students spend summer months working side by side with the best minds of the day. To support his vision and help him raise needed funds, he created a not-for-profit called A Brain Tumor and a Dream. To support Laske’s dream, his old friends—pedigreed artists and designers including Michele De Lucchi, Massimo Giacon and Nathalie Du Pasquier—donated drawings, sculptures and paintings to the Wright auction. As it has throughout his entire career, Laske’s work will mix with the work of others.

To contemplate the work of Larry Laske is to be convinced that life is an unfolding, ceaseless journey. So far, his has been one of a design nomad, trekking the globe in search of inspiration and collaboration. Between gigs, he pauses in Chicago long enough to figure out where he’s going next. Post-tumor, he may find a more permanent home in an ancient Sicilian church. And when he is in his eighties, he may, he says, consider finally settling down with a young Italian woman. For now, he keeps going.