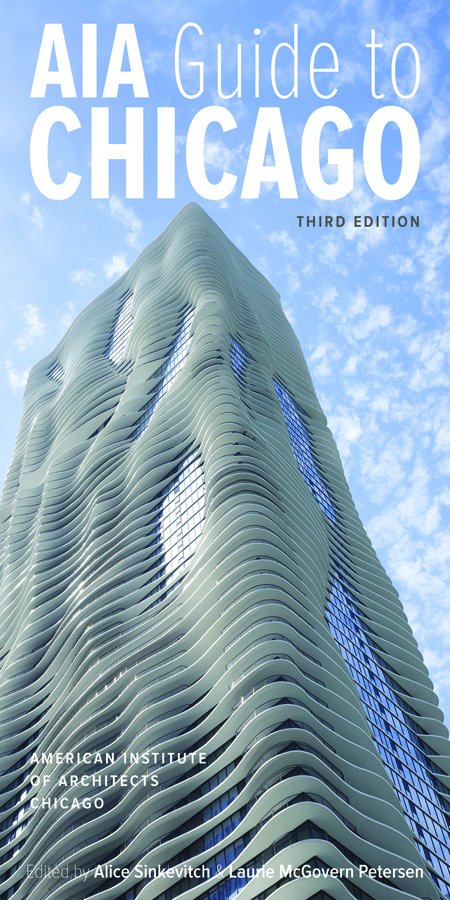 Aside from seeing every significant structure in Chicago in person, the best way to get to know Chicago’s architecture is an oddly-sized, encyclopedic tome, the “AIA Guide to Chicago.” A recently-released third edition of the venerable guidebook served as an occasion for Newcity to sit down with executive vice president of AIA Chicago, Zurich Esposito, and one of the book’s editors, Laurie McGovern Petersen, to discuss the expectations, trepidations and many joys of the four-year process.

What goes into the process of revising and amending a guidebook?

Laurie McGovern Petersen: The first thing I started to do for this edition is get in the car, drive and look at every single thing over again. I started four years—before we had a contract. That was just taking a leap of faith.

Zurich Esposito: We didn’t have a publisher but we knew it would happen.

LMP: Each time you have to see absolutely everything that was in the book again to make sure that it hasn’t been demolished or altered. And then there might be something that catches your eye that’s right on the route that you wouldn’t have heard of otherwise. We made a huge spreadsheet; I sat down with Zurich to confirm what would make the cut. Still, there were too many things to put in the book so we had an advisory committee that met and reviewed everything. It was interesting because there was total consensus on ninety percent of [the buildings].

There must have been some passion in those review sessions.

ZE: These weren’t knee-jerk reactions; they were really thoughtful evaluations on a building’s significance or importance. Maybe a building isn’t a beauty-pageant winner but it’s important in some other way.

There’s obviously a cutoff at some point. Was there a last building in?

ZE: We made the font smaller, so that helped! And Laurie is very strict and tough, as an editor needs to be, and kept me and the advisory committee in check with what the criteria had to be.

Do architects ask you why their building didn’t make the cut?

ZE: Rarely, which I think is a testament for the respect that exists for this book as an authoritative resource. People don’t complain.

Do architects know when one of their buildings makes the guide?

ZE: No. The best illustration of that is that Jeanne Gang had no idea that Aqua Tower was on the cover until I put the book in her hand.

What was unexpected about the process of putting the book together?

LMP: I could write an article about any building in the guidebook, but each typically gets forty-to-one-hundred words. I have to take out every extraneous word. Selecting which buildings to include is a challenge. But to prune down what you say about each building is even harder.

Architectural deep cuts from the book?

ZE: One of my favorite places in all of the city is Indian Boundary Park. It’s one of the more charming places on the North Side.

LMP: Lakeshore East is a hidden gem. People go to concerts in Millennium Park and have no clue that right behind a wall of buildings is a whole community. It sounds crazy, but it kind of feels like being in Europe.

What defines the last ten years of architecture in Chicago?

LMP: We’ve gotten more attention for this edition even than the first. There has been so much architecture made in the last ten years that people are really excited.

ZE: We were easily able to find a market, a publisher and a growing readership for books like these. I think it is because architecture is more a part of popular culture than it was fifteen years ago. We’re lucky here in Chicago that it is such a part of our culture.

What’s the secret sauce that makes Chicago architecture so wonderful?

ZE: There are other American cities full of great architecture. But the spaces in-between don’t lend themselves to getting a feel for the architecture itself. In some of those cities, you are better off looking at pictures of buildings [rather than] being there to see them. Chicago is not like that. We have wonderful public spaces between fantastic works of architecture and it’s a system that works really well together. That’s the magic to me.

The “AIA Guide to Chicago, Third Edition” is published by University of Illinois Press.