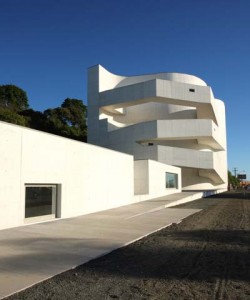 The recent awards dinner for the inaugural Mies Crown Hall Americas Prize was the culmination of an all-day event that drew architecture luminaries from around the world and across. The $50,000 purse attached to the honor is intended to encourage—as well as celebrate—exceptional architecture in the Americas. The Prize is the brainchild of Wiel Arets, dean of IIT’s School of Architecture and a respected architect himself. Despite the focus on the western hemisphere, the event turned out to be a global affair; one Prize was awarded to the Portuguese master Alvaro Siza, the other to Swiss materialists Jacques Herzog and Pierre de Meuron.

At the dinner, dignitaries from Portugal, Brazil, Switzerland and the Netherlands mingled among IIT students’ work. Mayor Emmanuel opened the festivities with remarks on Chicago’s role as the originator of American design culture, a claim that rings especially true within the sacred volume of Crown Hall. Over drinks, the audience watched seven finalists, chosen from a field of 265 nominees, present their projects in a format that was as varied as the designs themselves, in turns technical, commiserating, animated and touching.

In the charged environment, debate and discussion easily flowed through the room, an electric current illuminating the night. Snippets of conversations filtered past, the voice of a profession celebrating the power of a prize intended, as Arets said, to “recognize those who have invested their work with the mystery and power of human imagination.” Still more concepts floated by: self-assembling buildings, future landscapes, extra-terrestrial architectures, and of course the more grounded concerns of practitioners from across the city and the world.

The ceremony concluded with the announcement of winners, with architectural theorist Kenneth Frampton delivering news of two prizes in a speech as precise and academic as his writing. A champagne toast followed the announcement, and those in attendance settled in with drinks and dessert to enjoy the warm glow of post-climactic conversation. Joshua Prince-Ramus, representing OMA for the Seattle Central Library, held court in the center of the room, drawing the rapt attention of every attendee under thirty. Arets and the director of the prize, the architect Dirk Denison, relaxed visibly as the weight of responsibility was lifted, freed to rub elbows with the crowd. Conversations continued late into the night; they may yet pick up again when, in two years, the prize returns to Chicago. (Nick Cecchi)