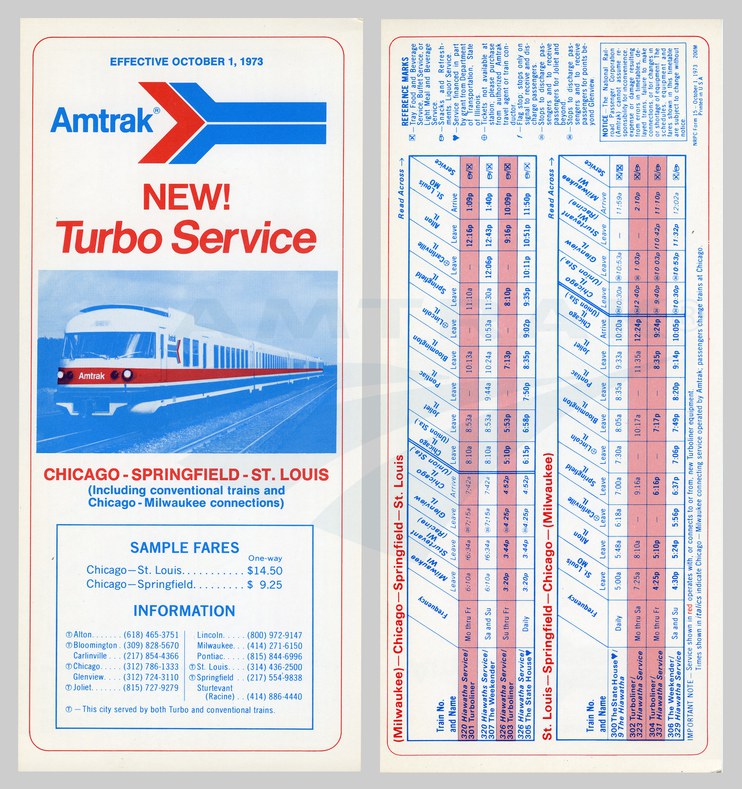 A 1973 Amtrak schedule promises a faster commute in the Midwest. Photo courtesy of Amtrak.

I am now “Midwestern bi-coastal, ” spending time on the shores of Lake Michigan in both Milwaukee and Chicago. These days, my favorite piece of graphic design nostalgia is the one-and-a-half-square-inch Milwaukee County Transportation System bus pass I carry in my wallet. MCTS is in the middle of implementing a smart-card ticketing system, complete with real-time tracker information. But for now, they still accept the lovely retro paper tickets that feature a purple MCTS logo with bleeding edges and the word “ADULT” rendered in orange neon with a purple outline. Across the top, the ticket reads: “Vital to the Community. Vital to You. Get on Board.” The tickets come ten to a perforated sheet and when you get on the bus, you simply hand one to the driver.

In our daily transportation choices, we vote with our feet. But in the upcoming elections, we will have the chance to vote for candidates who differ substantially in their support for urban infrastructure. As the Wisconsin gubernatorial election nears, the Democratic candidate, Mary Burke, brings up her opponent’s decision to turn down federal dollars for rail transportation infrastructure in 2010. In refusing federal support, Governor Scott Walker took Wisconsin out of the Midwest Regional Rail Initiative at a loss of both construction jobs and a potential boon to the regional economy.

Most of the country seems to be moving in favor of public transit use. In the 2010 Census, nearly twenty-nine percent of households in Chicago did not own a car. Milwaukee wasn’t too far behind, with twenty-one percent. This is nearly double the amount of carless citizens reported in the 2000 census. This increase is often attributed to the Millennials, who prefer dense, transit-rich cities. In fact, most discussions of transit use focus on the shifting preferences of the middle class toward trains and bikes. In a recent “CityLab” piece, Sarah Goodyear cites a study that suggests that the under-thirty set wants to cast aside their dull, car-centered suburban upbringings for a more cool and carefree life in the center city. I get it. My parents were the first of at least four generations to leave Milwaukee to raise me in the suburbs. My childhood was filled with stories, told by elders, about a walkable Milwaukee. To this day, my vision of an ideal urban life includes my grandmother, along with her slender, well-dressed friends, galloping arm in arm down Wisconsin Avenue to volunteer at the USO or dance at the Eagles Club.

But the focus on Millennials misses the larger point. Study after study by both transportation advocates and conservative think tanks like the Brookings Institution show that one of the biggest factors in households not owning a car is poverty. In many cities—including Chicago—this means there is limited access to jobs that fall outside the transportation infrastructure. A more complete narrative about transit needs to connect the changing needs of the middle class with those of the poor who never had an opportunity to flee to the suburbs in the first place. The Millennials aren’t immune to these broader issues: they too have been hit by the economic slump and are often underemployed, making economics as central to their carlessness as lifestyle preferences.

Being carless in Milwaukee seems to carry a certain stigma. We couldn’t find anyone in the neighborhood co-op grocery store, or the corner market, who could tell us the cost of a bus ticket or how to buy one. In a neighborhood that advertises itself as walkable, I have yet to see anyone walking for groceries. It is clearly more difficult to live carless in a city without a transit system as integrated as Chicago’s. Here, I have to make a hard choice: take the easier, but more expensive route, and buy a car, or tough it out with a patchy network of buses and bike lanes.

My daughter and I weekly go from Rogers Park via Metra or CTA to the Amtrak then to the bus in Milwaukee or, more often, my father’s car. Every time I take the trip, I get angrier with Scott Walker’s administration for a failure to see the regional economic connections that would have been made possible with high-speed rail. He wasn’t just hurting the transit-crazy liberals, but the entire regional economy. To borrow a phrase from second-wave feminism, the personal is political. The more we drive, the less we care about transit.