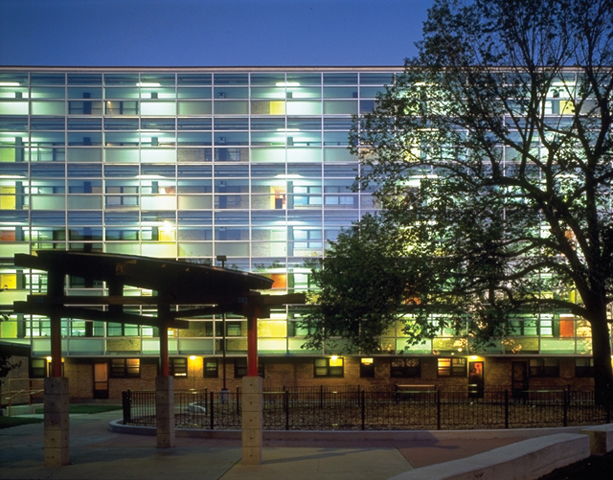 A housing development in Chinatown, Archer Courts is updated with a modern curtainwall and bright doors/Photo: Landon Bone Baker Architects

Landon Bone Baker Architects was founded by Peter Landon, along with partners Jeff Bone and Catherine Baker, on the premise that everyone deserves access to high-quality housing. The firm’s buildings are sensitive to the context in which they are sited. Its work responds to the needs of clients—and of broader social good. And on top of that, it’s a firm of genuinely nice people. And now the word is out as the AIA Chicago Firm of the Year Award goes to the people’s architect.

Even if you don’t know Landon Bone Baker’s name, you likely know its work. Across the city LBBA has designed everything from single-family houses to entire neighborhood developments that elevate basic materials through a vocabulary of modern design. The firm’s clients are mainly affordable housing developers, community-based organizations and the Chicago Housing Authority. But when you look at LBBA’s buildings, you can’t tell. That’s because the architects at Landon Bone Baker know how to wrest good design out of the tight confines of local and federal low-income housing regulations.

It’s impossible to identify Archer Courts in Chinatown as public or social housing. The careful, modernist rehab, conducted in 1999, honored the building’s original design while adding a stunning glass curtain wall on the front to replace what had been menacing chain-link fence. That deft move, coupled with addition of color on the apartment doors, reimagined the building as a mid-century gem.

A recent project is the Solid Ground Supportive Housing program for La Casa Norte in Humboldt Park, a gut rehab designed for homeless high-school students. The large new storefront windows hang below an exposed steel support beam with a distinctive steel awning at the entrance. These bold details give the building a big-budget feel—without the big budget. The interior features built-ins from the firm’s inhouse furniture company Knothead, which uses plywood to create durable yet warm pieces that work well in both residential and institutional settings.

On the near West Side, LBBA collaborated with Heartland Housing to transform the seedy Viceroy Hotel near Union Park into Harvest Commons Apartments. The firm restored ornate plaster detailing in the lobbies, while commissioning the non-profit archi-treasures to organize a participatory community art installation with sculptor Bernard Williams which has the footprint of a V in recognition of the building’s former name. Notably, archi-treasures itself was a project of a former LBBA staffer; both Pete Landon and Jeff Bone remain involved in working with residents and artists to add art and other sculptural elements to the firm’s projects.

Following the real estate crash of 2007, other firms starting competing for the affordable housing work that had always been the focus of LBBA. To highlight its collaborative approach and devise new forms of community engagement, Catherine Baker engaged Alex Gilliam of Philadelphia-based Public Workshop to found the LBBA Community Workshop in 2010. The summer-long program employs students from Chicago public high schools. LBBA recruits students from affordable housing that the firm has designed and from the Chicago Architecture Foundation’s high school programs.

The workshops—also known as labs—introduce students to data collection, survey research, architectural documentation and client communication. Interns work on real projects: for clients, they conduct post-occupancy research—which is rare in architecture—and gather information on building and site conditions. At the program’s capstone presentation, Landon told the students that the research they produced for the West Haven Homes would never have been possible without them. Brenda Gamboa, now a full-time employee of the firm, started with the first workshop when she was just nineteen. “They gave me opportunity when no one else would,” she says, “and I’ve grown incredibly as a result.”

The Labs contributed to the firm’s culture in other ways. A regular Wednesday lunch series started as a component of the summer program, now exposes staff to new ideas and people. Guests haves ranged from David Schalliol, who talks about photographing abandoned buildings, to Peter Levavi from Brinshore Development discussing affordable housing financing, to Benet Haller from the City of Chicago Department of Planning talking about how the systems of Chicago work.

We may never lose our collective fascination with the headline-catching projects that give Chicago its public identity. But our cities are also defined by how they treat the less fortunate and build neighborhoods. Chicago is fortunate to have a socially minded architecture community. For decades, LBBA has led and inspired those efforts. The firm created a conversation in the city about the nature of affordable housing. LBBA’s work has previously been honored by community development organizations; with AIA’s recent award, the firm is gaining wide, and well-deserved, recognition.