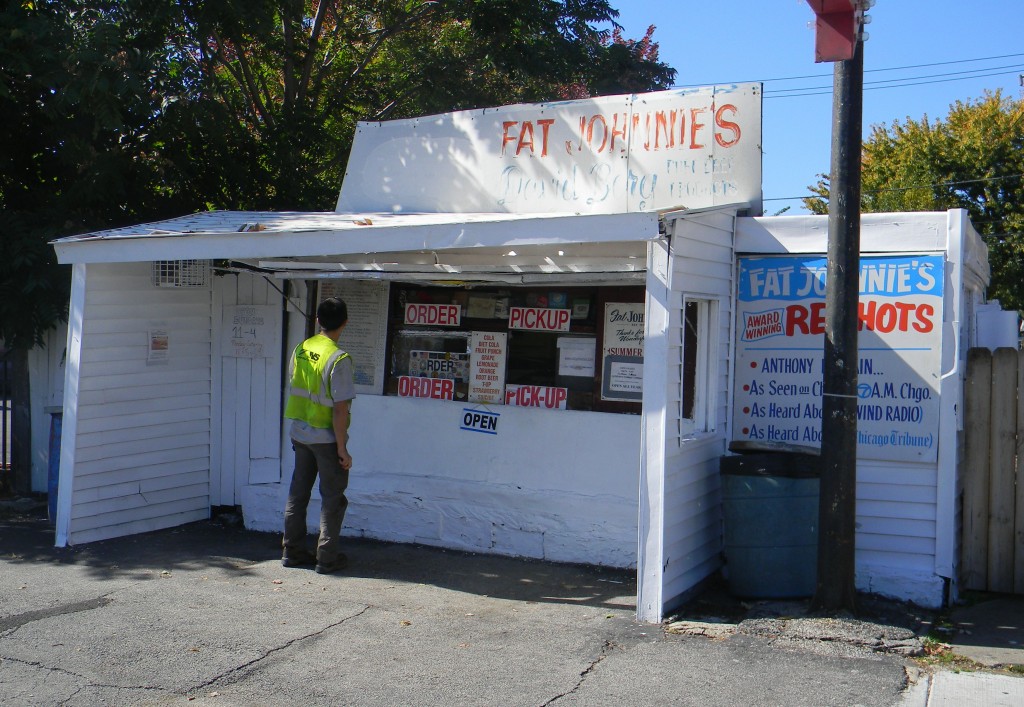 This is an architecture story, but it does not highlight the proud glass spires, barrel-vaulted ceilings and marble facades by Chicago’s famous architects. This is a story about structures lit by dim fluorescent bulbs and built with plywood, aluminum, cinder blocks, glass, plastic and linoleum. Tilting, sinking, bulging and lurching at odd angles, they are the architectural hybrid of Nelson Algren’s “Neon Wilderness” and John Steinbeck’s “Cannery Row.” They are Chicago’s hot dog and ethnic food shacks.

Some of them, like Fat Johnnies at 7242 South Western, have received national attention from Anthony Bourdain and National Geographic. Others, like El Cubanito with its mural of a voluptuous Latina, are neighborhood landmarks. But, like Johnny O’s, where you can get a hot dog, half pint, lotto ticket and a pack of cigarettes, or Susie’s, where you can get taco cheese fries at 4:30am, most of them are known only to loyal locals. From teens to construction workers to early morning revelers sopping up their stomachs, these shabby bastions of individualism have managed to thrive in a city increasingly polarized by fast-food franchises and fine dining.

The people who run these places are as hardy as their businesses. Individualistic, creative, and dedicated, these old-school entrepreneurs focus on personality, not portion control and profitability. 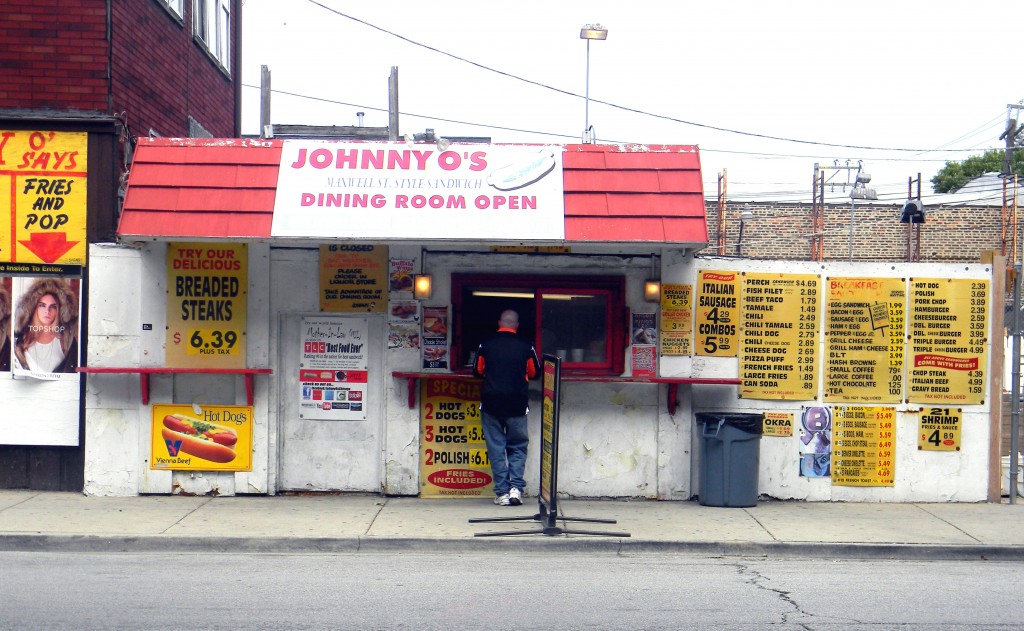 A native of Chicago’s old Italian-American neighborhood at Harrison and Laflin, Johnny Veliotis and his hot dogs have been a fixture on the South Side for more than half a century.

“I started as a kid, selling hot dogs from a push cart,” Veliotis says about his restaurant located at 3465 South Morgan “Then I got two push carts, one in front of Comiskey Park.” In 1959, Veliotis took his operation off the wheels when he bought an old tavern at the corner of 31st and Poplar. He renamed it and in 1970 “bought this building, which was kind of like a mini-mart. And then in seventy-four-seventy-five, I opened up the hot dog stand in back. At that time this neighborhood was booming. You still had businesses associated with the Stock Yards like Wilson Trucking, you had the Spiegel Warehouse and about nine restaurants and bars, including us, which catered to all the workers.”

Johnny O’s “dining room” is part of a labyrinthine structure that also contains a store, an unused entrance on Morgan, and a hot dog stand off 35th. Johnny O’s kitchen cooks up more than forty dishes, including mainstay Italian beef sandwiches and plenty of breakfast items. But the backbone of Johnny O’s is the holy trinity of South Side fast food—breaded steak sandwich, Maxwell Street pork chop sandwich and the “mother-in-law.”

The breaded steak sandwich, a Bridgeport invention, consists of skirt steak dipped in flour, deep fried, slathered with red sauce and presented atop Italian bread; Johnny O’s is a fine representative example. The Maxwell Street pork chop consists of the titular swine, laden with grilled onions and mustard and served on a bun. Then, there’s the “mother-in-law.” Johnny O’s is comprised of two tamales, chili, pickles and sport peppers, all on a hot dog bun. The dish has been featured in national food media. “We don’t know exactly how the name came up,” Veliotis, says. “Some people say it causes heartburn, like your mother-in law.”

Johnny’s O’s food stand is open twenty-four-seven, 365 days a year. But the rest of the operation keeps staggered hours. “You can buy liquor until 10pm and the store closes at 1pm.” Veliotis calls it an “inconvenience mart.” 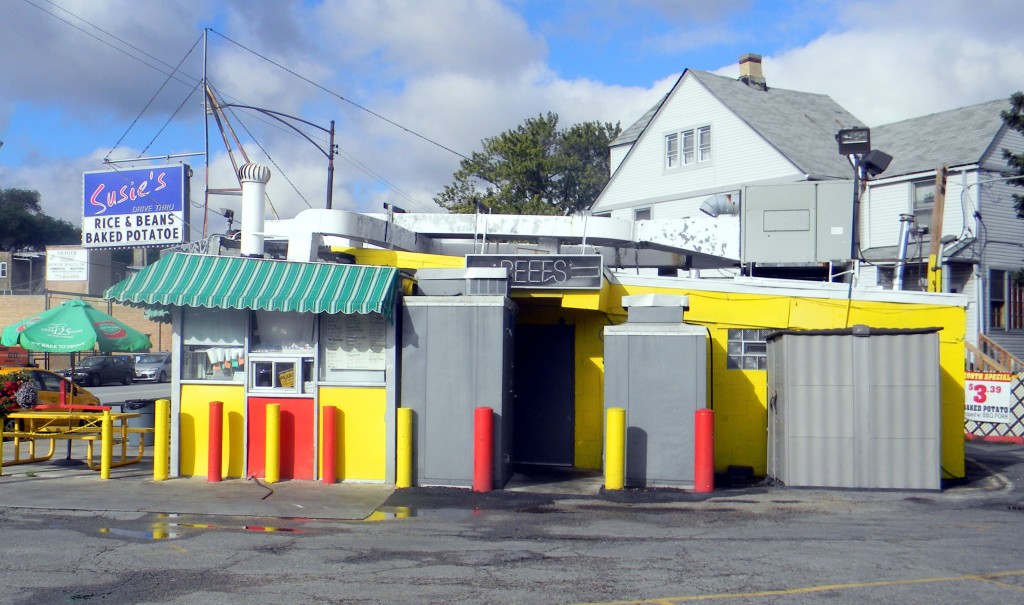 Susie’s, at 4126 West Montrose, has been serving up homemade fast food for more than forty years. It’s a family affair. Susan Karda runs the stand along with her sister and sister-in-law.

“The stand was opened in 1974 by my father, Gus Ninos, who named it after me,” Karda says. “He wanted to go into the restaurant business but didn’t want to open the traditional family-style ‘Greek’ corner restaurant.” Instead, her father dreamt of a hot dog stand.

But over the years, Susie’s has become best-known not for hot dogs but for its fries, which come in a large bag known as the “pound o’ fries.” Mouthwatering varieties include bacon cheese fries, Philly steak cheese fries, gyros cheese fries, and “confused chicken” cheese fries served in an edible bowl. Toppings aside, the fries themselves are prepared with as much care as fine bouillabaisse.

“All our fries are hand cut from fresh potatoes,” Karda says. “Then they are slow-cooked in four different oils at four different temperatures,” a recipe which Karda’s mother insisted was the “Parisian way” to make French fries. As for the secret sauce: “when they are done, we sprinkle them with our own, homemade salt.”

The menu is as imaginative as the design of the restaurant. “It started out as just a little place but as the years went on we bought more property, adding and adding little by little,” Karda says. A neighboring house was annexed by Karda’s father, who also added a drive-through. “Then we kept going back, back, to a point where it stops at the walk-in cooler. The signs have also changed, from handmade and homemade to laminated as we tried to upgrade. The color has also turned from red, to yellow (and at one time my mom painted it Flamingo Pink) to what it is now,” Karda says. “But that is what happens to a place that has been around for over forty years.” 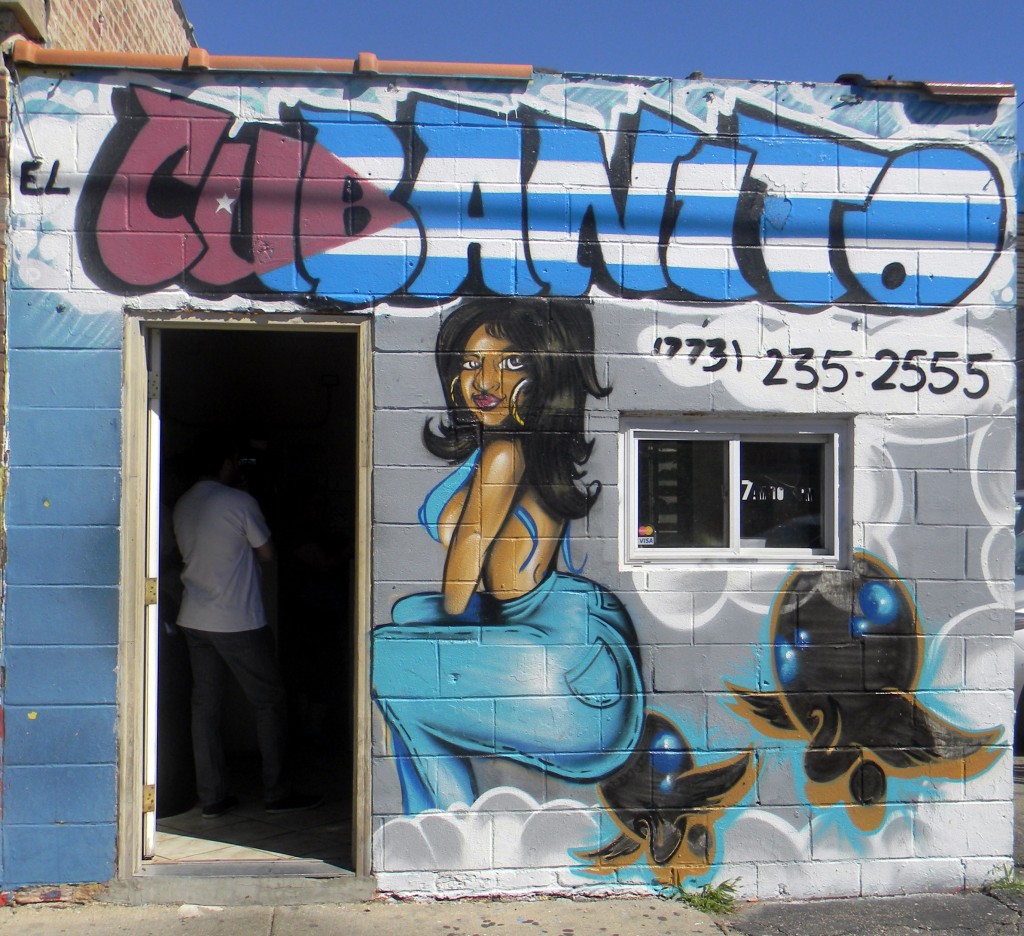 El Cubanito is a small, cinderblock shack tucked in among an industrial stretch at 2555 North Pulaski. When the restaurant opened in 2007, owner Alberto Ramos let a local muralist spray-paint a caricature of a Latina woman munching on a sandwich. The caption reads “mm que rico:” how delicious! The mural faded over the years and was recently updated. In the current version, the woman practically bursts out of tight jeans and her breasts have been embellished in a loosened halter-top. The mural is a celebration of food and of “la chica con las carnes generosas.”

The ampleness of the mascot is matched by the size of El Cubanito’s portions. For starters, the three-dollar empanadas are large, meaty and flavorful. For a snack, there is the hot version of a traditional Cuban sandwich, which features layers of ham, melted cheese, pickles, mustard and roasted pork loin. The main course is the steak sandwich. Unlike many Cuban places that serve a single piece or marinated steak, the sandwich at El Cubanito is a heap of shredded beef which spills out of the bread—a Cuban Italian beef of sorts. A mojo marinade of cumin, orange juice, lemon juice and garlic has a kick that can put other beefs on their heels. And instead of French bread, this sandwich comes on pan Cubano, pressed and grilled to a crispy perfection. The whole composition is topped with shredded lettuce, bits of tomato and spicy mayonnaise. All this and shoestring fries for six dollars, which is why there are often lines heading out the door of the modest structure, which barely accommodates ten people standing. 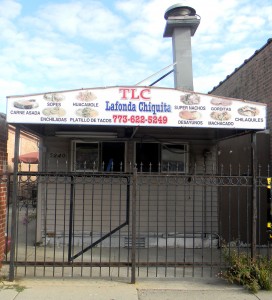 Fat Johnnie’s Famous Red Hots, 7242 South Western.  A part of the Marquette Park neighborhood since 1972, Fat Johnnie’s is the very definition of a shack, cobbled together with plywood, sheet plastic and screen. Yet this shack has been featured in National Geographic, Anthony Bourdain’s “Fast Food” and described by some as among the best hot dogs in the country. Although they serve a “mother-in-law,” the restaurant specializes in hot dogs and Polish sausage. At $2.25, this fully dressed Chicago hot dog is a bargain. The only flaw may be that, in the tradition of many old-time stands, they top a hot dog, already salt-filled missile, with a generous helping of celery salt.

La Fonda Chiquita, 5940 West Diversey. Like many simple taco stands on roadsides south of the border, La Fonda Chiquita is a mobile home turned into a food operation. It serves tacos, burritos, enchiladas and the house specialty carne asada, grilled to perfection. The food is passed through a small window for either takeout or for dining on a small cement patio that features outdoor tables and a small brick arch reminiscent of a mini-hacienda.

John’s GAR Hot Dogs, 2658 West 47th.  The acronym stands for Great American Restaurant, which opened in 1965. The stand is known for both its hot dogs and its South Side standby “mother-in-law” sandwich. At John’s, the tamales, which are the substance of the sandwich, come from Tom Tom tamales just two blocks south, and are dropped into a large Styrofoam cup of chili and topped with giardinière. 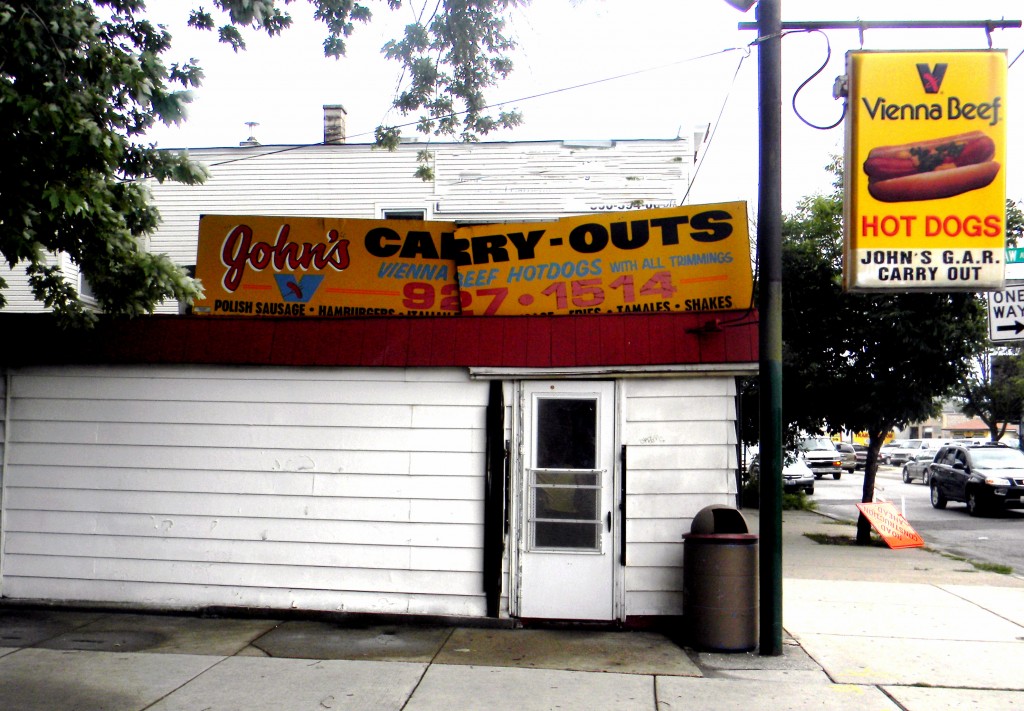