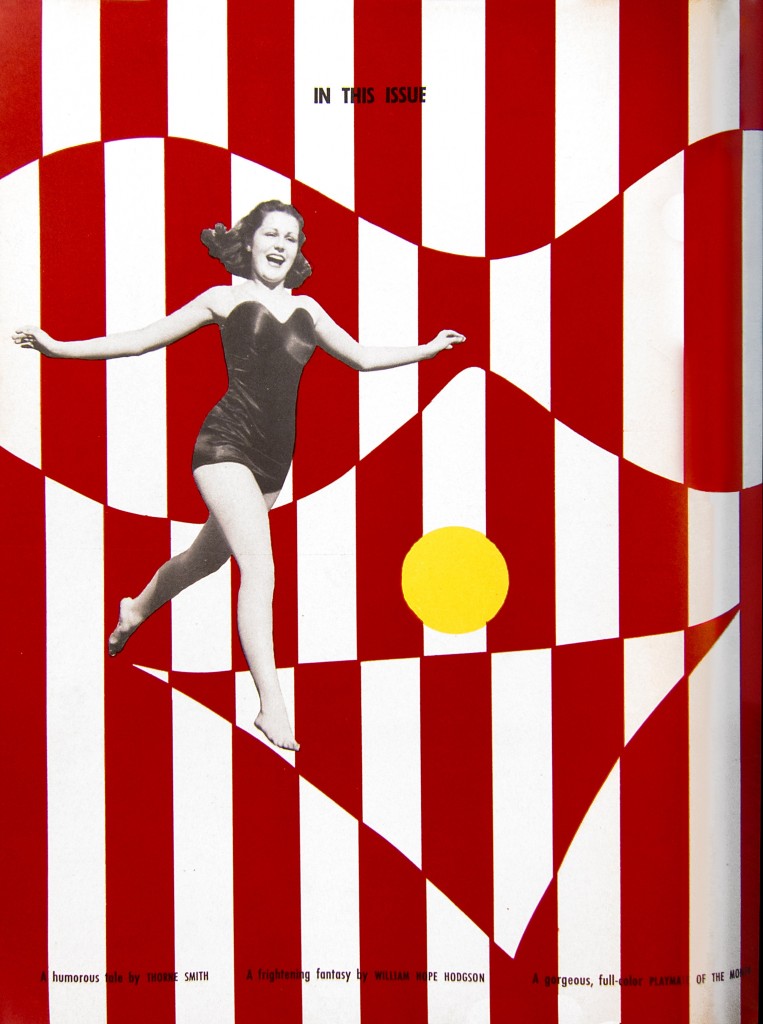 For a good portion of Art Paul’s career, his most recognizable work could be found, often by worried mothers, hidden in the sock drawers of American teenagers. And no wood-paneled den and rec room of middle America was complete without at least a few of his works. Art Paul may not be a household name, but his impact on commercial art is undeniable. As the first art director of Playboy magazine, one of the most widely circulated periodicals in history, Paul would help define the taste, look and direction of contemporary art for decades to come.

As part of the 25th Chicago Humanities Festival, James Goggin spoke to a full house at the Chicago Cultural Center’s Cassidy Theater about the man behind the Bunny. Goggin, former director of design for Museum of Contemporary Art, first came in contact with Paul while looking through decades of MCA’s publications. Paul’s name appeared on the board list alongside scores of notable Chicagoans. It didn’t take much more digging to discover that Paul, who is a kind of cult figure in midcentury graphic design circles, was alive and well—in an apartment located a stone’s throw away from the MCA. Goggin dropped in unannounced. He would eventually have access to Paul’s home and his archives; these materials, spanning seventy years of ceaseless activity, formed the basis of the CHF talk.

Upon returning from service in WWII, Paul enrolled in the nascent Institute of Design. He turned down a scholarship to the School of the Art Institute of Chicago, which had seemed tame in comparison to the avant-garde promise that Bauhaus had introduced to Chicago. Paul’s interest in the relationship between fine art and commercial art fit into the Institute of Design’s loose and experimental curriculum. Finding early commercial success, even while still in school, it would only be a few years into opening his own studio that Paul was visited by an ambitious former Esquire staffer Hugh Hefner. Hefner, who was working from his kitchen table, needed an art director for a new men’s magazine, then under the working title of Stag Party. After some convincing from Paul and others, the name soon changed to Playboy, and a first issue would be produced under Paul’s art direction. In the first issue, an ecstatic Marilyn Monroe, silhouetted against a white background, defined the magazine’s thoroughly modern design vision. But even more importantly, inside the pages of the new magazine, a certain lovable furry mascot made its debut.

At first the Bunny was meant as a simple graphic to mark the end of stories. By the second issue the Bunny had found its way on to the cover, where it remained in some form every issue thereafter. Through these inventive, irreverent covers Goggin traced Paul’s interest in abstraction, in fine art, in the substance of everyday life, and in the brightest cultural moments of his generation. The Bunny was ever-present: from Bunny-shaped tan lines on bikini-clad bodies to psychedelic body paint, the early years of Playboy were like nothing readers had ever seen. Like a coquette, the magazine’s covers simultaneously concealed and revealed the riveting stuff—centerfolds, yes, but also some of the best journalism of its time—that Paul and Hefner had put inside.

Aside from the graphics and layouts that Paul designed for Playboy himself, he also used the magazine as a platform for avant-garde artists. This is of particular interest to Chicago, as Goggin pointed out, as many of the artists Paul championed were people he encountered at the Institute of Design and around town. Paul featured Imagists including the likes of Ed Paschke, Don Baum and Hairy Who’s Karl Wirsum. Paul’s decision to print the work of the Imagists flew in the face of the art world—another way in which Playboy was approaching contemporary culture from a different perspective. Paul was not, however, limited by the magazine’s Chicago roots. He notably collaborated with top artists of the time, commissioning covers and spreads from Salvador Dali, Andy Warhol and Tom Wesselmann, each of whom contributed to Playboy’s art-obsessed features like 1967’s “The Playmate as Fine Art.”

While Paul’s commercial work is perhaps his greatest legacy in the design world, his output of fine art is no less prodigious. In Paul’s personal collection, Goggin found early illustrations of literary figures and Paul’s most recent sketches that comment on his diminishing eyesight. The same optimism and humor that permeated his professional work could also be found in the personal work: single line self portraits, letterform compositions and intricate pen work share a sense of levity, and as Goggin put it, “give the viewer credit for intelligence.” And despite often being abstract, Paul’s message is nevertheless blunt. Once, in a joint radio interview with Andy Warhol, Paul was asked for a definition of good art. “Honesty,” he said.

As the CHF talk ran well over its one-hour mark (a wedding crew was waiting outside of the doors to set up), Goggin still had lots to show. Rushed, Goggin skipped explanations and simply projected slides. One work after another made an eloquent argument for Paul’s quintessential role in American graphic design. He enticed middle America to reconsider its relationship with the avant-garde. He did it without condescension or force. Paul understood the power of pop, and once a month he had it delivered right to your door.