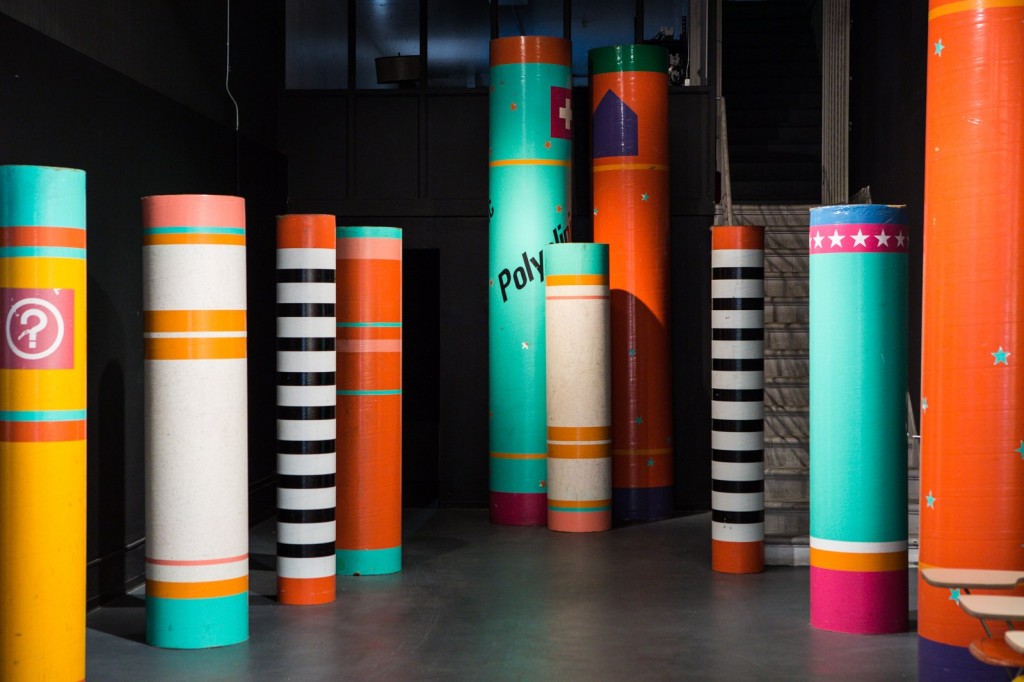 “Los Angeles makes nonsense of history and breaks all the rules,” quips British architectural critic Reyner Banham in the opening of “Reyner Banham Loves Los Angeles,” his 1972 documentary about that city’s car culture. He professes that he loves LA “with a passion that goes beyond sense or reason” as title credits appear not as familiar superimposed text, but as a shot of a psychedelic yellow billboard emblazoned with saccharine hearts and puffy pink type. Banham commissioned local designer Deborah Sussman to imagine that eye-popping presentation, a testimony to her talents in applying unabashedly bold graphic design to shape public space in Los Angeles into optimistic, larger-than-life destinations.

“Deborah Sussman Loves Los Angeles!”, a retrospective on view at the Chicago Design Museum through the end of February, spans the designer’s first job in 1953 at the famed Eames Office through her career highlight of designing graphic identity for the 1984 Los Angeles Summer Olympic Games. The exhibit, which originally ran earlier this year at Woodbury University’s WUHO Gallery in Los Angeles, suggests that Sussman found her voice early, and that it only amplified with time.

The sprawling Los Angeles cityscape encouraged Sussman to develop a bigger-is-better approach to environmental design by placing bright colors, shapes and patterns onto three-dimensional structures—a practice of what would eventually be known as “supergraphics.” Today, supergraphics are part of the marketing vocabulary, used by promoters in retail environments and public spaces. But in the 1960s and seventies, Sussman’s approach of superimposing images onto the built environment was revolutionary. “She was an artist in placemaking, and that was key in a city like Los Angeles, where the scale is far-reaching,” says Elizabeth Cummings, who along with Matthew Terdich and Morgan Walsh, is a curatorial organizer for the Chicago exhibit. “Just by communicating with color and material, she could make even a retail store become a destination.”

Sussman’s fascination with, and affection for, her adopted city was as sweeping as the Pacific Coast Highway, and her exuberance and humor—both obvious in the lively palette that explodes across the museum walls—were her trademarks. Brooklyn-born, Sussman was still designing at the age of eighty-three; she died this past August. Sussman came to Chicago in 1950 to study graphic design at the legendary nexus of modernism, the Institute of Design, where she sat in on a lecture by Charles and Ray Eames. The duo’s playful, optimistic approach to a critical practice was a revelation in line with her own ambitions. A recommendation from a teacher soon landed her a dream summer internship with the Eames Office in Los Angeles. She stayed to work on a number of projects that strengthened her talents in graphic, product and exhibition design, and by the late 1960s, architects started calling. “All of her projects were marked by her use of a large scale and her vibrant sense of color,” Terdich notes. “She worked with the idea—like the Eames—of a structured playfulness, as opposed to freeform playfulness.” With her husband Paul Prejza and their studio Sussman/Prejza, her career brought collaboration with architects, artists and fellow designers on important commercial and civic jobs.

“Deborah Sussman Loves Los Angeles!” is a good fit for a museum that’s still finding its footing and its place in Chicago’s cultural landscape. “Design isn’t just graphic design, and we wanted to consider how we could look outside of what’s happening in Chicago,” explains Walsh. The show’s pan-design ambition suggests a trajectory toward a broader approach, a move away from the museum’s last exhibit, the intensely introspective “Starts/Speculations: Graphic Design in Chicago Past and Future.” This time, it’s an unabashed design love-in. “I hope visitors can realize all of the things that design is, and can be,” says Cummings. Here too is an echo of Sussman’s influence: “The boundaries are permeable.”