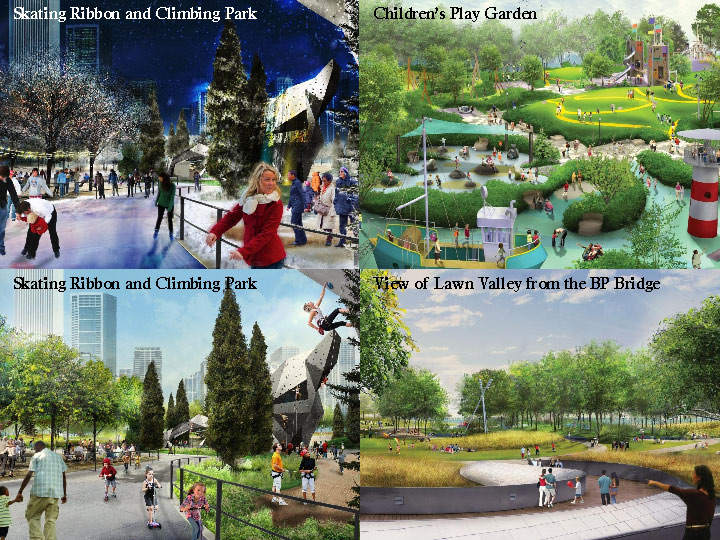 The newly opened Maggie Daley Park is a technicolor dreamcoat of a park, with a climbing wall, all sorts of brightly painted play gear, thirty-foot light masts, a ribbon for ice skating and landscaped mounds that gently capture the faces of skaters who spill on a sharp turn. It occupies a tricky, twenty-acre parcel just east of Millennium Park, bounded by Monroe Street on the south and Randolph Street on the north. Frank Gehry’s metallic bridge connects to the site, and before the new park was installed, a journey along its serpentine path seemed like a trip from West Berlin to the East, the shimmer of capitalism giving way to cracked concrete and sickly grass.

The new park tries very hard to please, and perhaps it does. Its design, by the very good Michael Van Valkenburgh Associates, is symptomatic of a larger cultural trend. Today, the public realm—and especially parks—reifies the ambitions of city boosters anxious about competing for affluent families, young talent and visitors. These new, hyper-competitive spaces that are emerging all over the world are what the “Bilbao Effect” was to a previous generation. Call it the High Linification of the public space.

But there’s a key philosophical difference between Maggie Daley Park and parks like the High Line. In Boston, simple lawn chairs and hammocks on a grassy lot signal a new destination. In San Francisco, much-lauded “parklets” turn parking spaces into sidewalk cafes and playlots. In Philadelphia, barges along the riverfront create floating gardens. Here, throughout Chicago neighborhoods, the nonprofit Architecture for Humanity has been quietly remaking vacant parcels with volunteer labor and donated materials. And over the summer, my former colleagues at the Chicago Loop Alliance hosted a series of “Activate” events that breathe life into gritty downtown alleys. The High Line is an example, albeit an extreme one, of tactical urbanism that’s happening at all scales in Chicago and elsewhere. The common thread among these isn’t about landscaping or fixtures; it’s about a group of people who transform unused spaces into useful ones. For all its chutes and ladders, Maggie Daley Park transforms a park into a park.

There isn’t anything objectionable about that. In fact, the park’s intentionally whimsical, kid-friendly design is a fitting legacy for a woman so dedicated to welfare of young people. According to Van Valkenburgh’s project brief, the “relentlessly heterogeneous” design incorporates “innovative play equipment” for “imagination-driven play.” There’s plenty of color and topography. There’s even a cafe for adults to hang out.

Not so long ago—indeed on my watch—parks looked entirely different. A standard had been set by green spaces that benevolent magnates of the industrial age bestowed upon the working masses. In their leisure time, the masses would commune with nature and one another in places that were relatively democratic and relatively unadorned. For a vivid illustration, cross the street from Maggie Daley Park to view Georges Seurat’s “A Sunday on La Grande Jatte” at the Art Institute. Another block or two toward Hutchinson Field will reveal an American beaux-arts version of the good life, the symmetry of gardens and allées terminating at the comically grand Buckingham Fountain.

The parks of my childhood were kind of like that. Though they didn’t purport to stimulate imagination-driven play or facilitate innovation, they held a world of excitement: old ladies feeding pigeons, benches carved with reminders of sexual encounters, older kids smoking cigarettes, lampposts wrapped in a patina of want ads and missing cat fliers, a scent of urine and dope that made my head swoon, and equestrian statues of long-forgotten dudes. At moments of particularly relentless heterogeneity, there’d be a stray dog.

This remains, more or less, the template for the bulk of this city’s parkland. Yet, as public realm design becomes more sophisticated, in turn dictating consumer expectations, the landscapes of my memory are in danger of disappearing. Maybe that’s OK—even through the haze of nostalgia, the iron-fenced city parks were no paradisiacal gardens. Maggie Daley Park, and others like it, teach the vogue curriculum of creativity and innovation. But the older parks had their own pedagogical approach. They were a Cliff’s Notes of the urban experience, a compressed and variegated lesson in history, social class, real estate economics, race and anatomy.