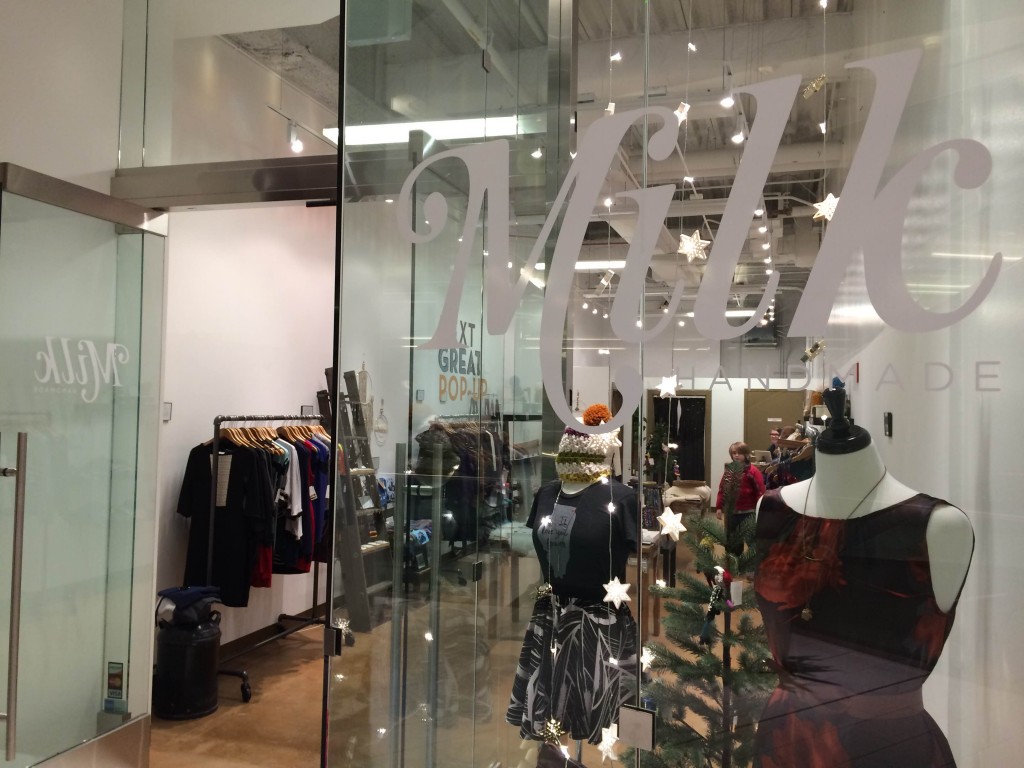 Since 2012, the women’s clothier Milk Handmade has represented a curated cross-section of local designers including Squasht, Little Minnow and Muse Belts out of its permanent storefront in Andersonville. Recently, Milk experimented with a downtown retail outpost. Proprietor Hallie Borden and Milk won Block Thirty Seven’s pop-up space contest, receiving a two-month rent-free residency at Block Thirty Seven, bringing the craft movement to downtown and raising the stakes on buying local and handmade goods.

Pop-up shops are still a new way for getting local makers out in front of new audiences. Traditionally, craft fairs—and there’s a whole circuit that stretches from one coast to the other—hosted in schools, churches and field houses have provided a space for makers to connect with consumers in a low-cost environment. And the few maker movement shops that have taken a risk on retail space are rarely in a position to afford the downtown rental rates, settling instead outside of established commercial centers.

In both of these respects, Milk’s centrally-located boutique, which operated through the holiday season, was highly unusual. In a conversation with Newcity, Borden reflected on her experience at Block Thirty Seven and shared plans for the coming year.

Tell us about how you got started, how you got involved in the maker movement.
Milk Handmade has been open in Andersonville since May of 2012, so we are going on three years this spring. Opening a store was a lifelong dream, and I knew that I wanted to support the handmade art and design scene in my hometown.

Do you respond to current trends in what you consign? Or do you shut out influences and try to show original design?
While we occasionally bring in a few trendier items, I prefer pieces that are timeless and will last from season to season. Personally, I’d rather have a smaller wardrobe filled with unique, meaningful and high-quality pieces than an ever-rotating collection of disposable fashions. I keep that in mind when stocking the store.

What is particularly unique about Milk?
Each piece that we stock represents the vision of independent designers. There’s no corporation to edit the designer’s work, no one to say “play it safe,” no one to say “no.” So every item is truly a work of art, from concept to creation.

Are two-dimensional representations of designers’ work in Milk’s online catalog sufficient, or is it necessary to see the work in-person to really appreciate it?
We try to give a good sense of our collection online, but our focus has always been in-person. I love interacting with my customers, helping them and learning from them; that will always be my top priority.

What’s next for Milk?
This year I hope we continue to grow and meet new people, as well as maintain our relationships with our most loyal customers.

This season, consider buying from local small-batch and indie distilleries. A newcomer to the scene is Sketchbook Brewing, a craft brewery run by Chicago visual artist Shawn Decker and partner Cesar Marron, the Samuel Adams Longshot award winner for his Gratzer. Newcity caught up with co-founder Decker over a brew.

How did you and Cesar get started with Sketchook?
Cesar and I have each been homebrewing about five years very passionately, learning as much as we could about making, tasting and judging beer. We met in the Evanston Homebrew club—the brewery itself—and rented space in January 2014. We got help from friends and family, and began building, doing as much DIY as possible. We did a Kickstarter campaign, of course, and started a Community-Supported Brewery (CSB) subscription, which topped out at three hundred in October. Also that October, we started growler fill for our CSB members, and fully opened on November 21.

As an artist, what do you see as the niche for Sketchbook brews?
The artist/artisan connection is pretty interesting for us, although not unique. I would say the DIY aspect of what we do is also pretty important. And a lot of the sustainability stuff also–again while not strictly “unique,” a lot of what we are doing in those areas is unusual. The CSB business model and the strictly local nature of what we are doing are of course all geared toward sustainability. But [the model] is also about local community and culture and also connects to the art side of our practice.

Sketchbook microbrewery offers a rotating list of brews that includes scotch ale and cherry cider. It just opened to the public last November, so it isn’t an overcrowded hot spot—yet.