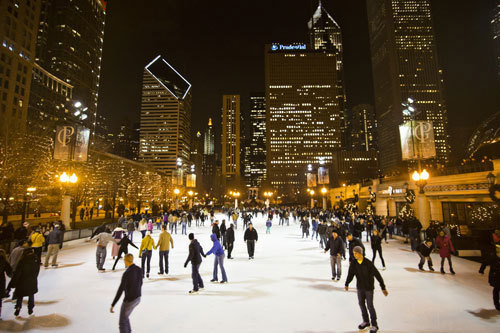 Bracing, romantic, exhilarating. For good reason, literature, like life, mythologizes ice skating. In Hans Brinker, or the “Silver Skates,” the classic children’s story about a Dutch boy on the Zuider Zee. In “Anna Karenina,” when Levin first proposes to Kitty: “On that day of the week and in that hour of the day, people of the same circle, all acquaintances, gathered on the ice.”

With a brand-new pair of figure skates, I set out to explore a few of the many outdoor ice-skating rinks in Chicago. I started in Millennium Park, that jewel of an ice rink, at the perfect tipping point between urban stimulation and serenity.

At the end of a brilliantly clear winter day, as a stream of traffic hummed along, I fell in with the other skaters, warming up on Frank Sinatra ballads. After a few turns around the ice–the rink is relatively small–the quotidian markers of the everyday, cars, buses, buildings, fell away. Surroundings came into view with that synergy of good public design and the exercise, or indulgence, of imagination.

To the north and west, steel-frame skyscrapers became a magnificent mountain range of ivory and grey stone, of silvery glass. To the east, the beloved Bean lay covered with patches of snow like a stretch of extra-planetary archipelagos. To the south, in the falling dusk, Awilda grew more luminous against the north panel of Crown Fountain, by turns Christmas red and green, royal blue and fuchsia.

Next week, next stop: Maggie Daley Park. I crossed Frank Gehry’s sleek, snaking BP Bridge, knowing not to expect what had once been there: an expanse of uninterrupted, elevated parkland, offering equally expansive views of Lake Michigan and Grant Park. But on to the Ribbon. Like skating on a river, I thought; flying along continuously unfurling, flowing space. The ice was glassy smooth when I first took to it and I was glad for more freedom to move forward, not around.

But one of the joys of public skating is watching other skaters; sharing their small triumphs and disasters. Everywhere I looked, something in the Ribbon’s interior obstructed views of the other side. I could see only what was directly in front of me. I shifted my gaze toward other horizons: a glimpse of Aqua; Lake Point Tower, a modern fortress, bold and black, buttressing Lake Michigan; a horizontal sliver of lake; a band of winter trees in Grant Park. (Aaron Rose)