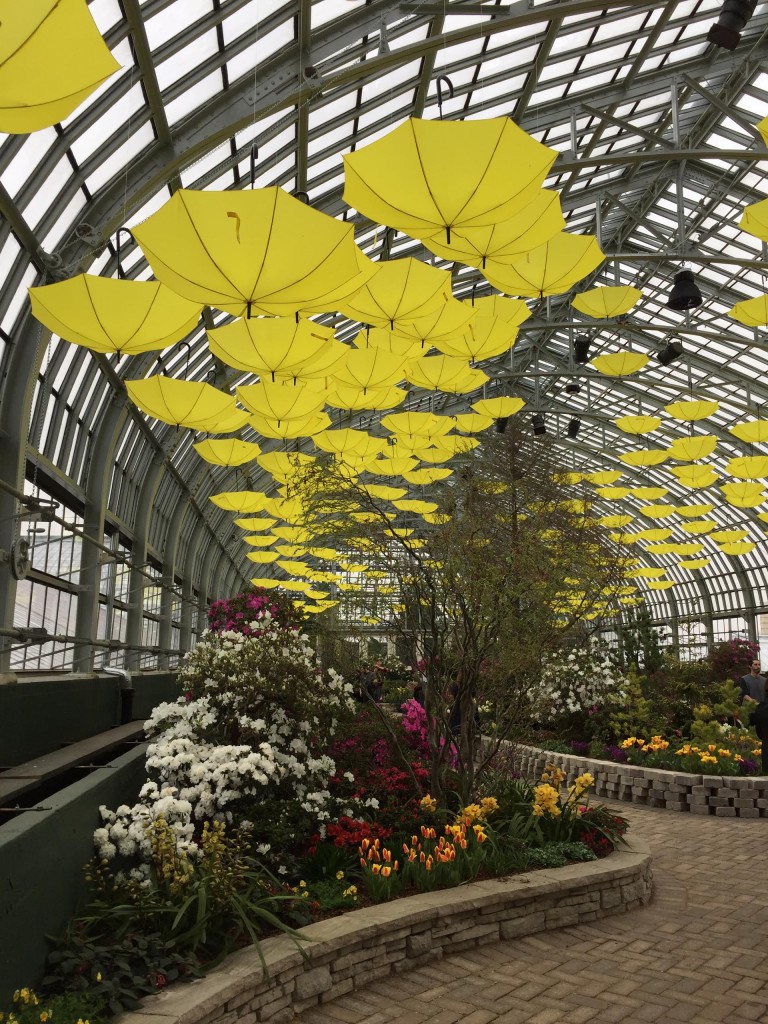 The last interminable days of winter, pictures of friends lounging on a Hawaiian island or the coast of Mexico deepen your longing for the sun, warmth and color, especially green. But you don’t need a six-figure vacation to equatorial paradise to land yourself some serious visual, tactile and olfactory relief.

The luxurious comfort of balmy air, lush green and fragrant spring flowers is available now—right this moment—at Garfield Park Conservatory, located at the northwest edge of Garfield Park. Designed by Danish immigrant Jens Jensen, and opened in 1908, the Conservatory is one of the most historically significant, and one of the largest, glass houses in the world. It was the first of its kind: what came before were Victorian-era structures that looked like palaces filled with exotic potted plants crowded in a precious hothouse environment.

Instead, taking inspiration from the spacious Midwestern location, Jensen designed a series of structures shaped like graceful haystacks. Jensen’s conception of the plantings within was also revolutionary: he recreated an outdoor landscape enclosed by glass. His designs for interior space considered the view and experience of the visitor strolling the indoor garden. The notion of plants as objects to be admired gave way to landscapes that offered a vista and the salutary benefits of a natural environment.

Like many conservatories, one enters at the midway point in the largest—the tallest, widest and longest—of the houses. Across the stretch of huge palm trees and dense tropical plantings, crisscrossed by stone paths, is the entrance to the Fern Room, with its dramatic stairway leading down to a hushed sanctuary that, with its gently waving stems, seems to suspend time. The Fern Room runs along an east-west axis, perpendicular to the Palm House. It’s a breathtaking moment and a tribute to Jensen’s attention to space and view. One is forced to stop immediately upon entering. To slow down. To look.

This season, the moment is especially surprising and delightful. At the center of the Palm House hang yellow umbrellas, suspended from the peak of the glass enclosure like a brighter, gayer vision of the painting by Magritte. The Fern Room is still closed for renovation, as is the Desert House, following the summer hailstorm of 2011 that caused extensive damage to the Conservatory. The Show House reopened on Valentine’s Day this year, with its current “Sun Showers” exhibition; the Fern Room will reopen April 22.

I walk slowly around the south end of the Palm House toward the Sugar From the Sun permanent exhibition, where lots of families have brought young children. Someone spotted an errant beetle scurrying across an open space in the center of the house. A few of us formed a small human chain to protect the large brown coleoptera until it found its way back around a rock to a safe bed of soil.

Another leisurely walk back through the Palm House to the Show House and the current “Sun Showers” flower show. Here, too, hang the yellow umbrellas: nearly 200 span the length of the Show House. During repairs, the Chicago Park District also redesigned the Show House to accommodate, for seasonal exhibitions, a central ellipse, according to Jensen’s original configuration of the space. Now, the raised bed in the center more closely resembles its 1908 configuration. With stone borders for sitting, the wide, oblong-shaped path around the center creates an effect similar to small-town Main Street.

People were everywhere, laughing, smiling; standing, sitting, walking back and forth through the swinging doors to the Horticulture Hall. A little girl and her toddler brother ran through the Show House with glee around the festive riot of brightly colored, sweetly fragrant spring flowers and flowering trees: yellow daffodils, purple hyacinth, azaleas, camellias, tulips and large pots of exquisite orchids along the path. To the west, through two sets of double doors, is the Aroid House. The Aroid House, a bit smaller, demands an even slower pace to appreciate the plantings, the views and the surprises that reward close attention. A waterfall at the east end of the House replenishes the serene central lagoon, still graced with the “Persian Lily Pads”—more vibrant yellow and deep, ruddy orange—created by artist Dale Chihuly for the lagoon, for the 2001-02 Conservatory exhibition.

Back through the Palm House, a young man studiously sniffs a Climbing Oleander. He sniffs, speaks to his companion, and sniffs again. I patiently wait my turn, and am not disappointed. One blossom on the large, potted plant is especially fragrant. Like the man ahead of me, I breathe deeply of the sweet fragrance, then breathe again.

Spring will come. It really will.