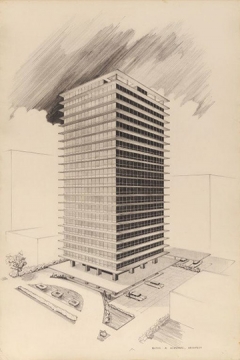 Architect Milton Schwartz is perhaps most well-known for being underappreciated. That he was a developer as well as an architect marked Schwartz as an outsider in the design field. The architecture industry has traditionally frowned upon such hybrids, preferring that architects work separately from the mercantile aspects of the building business. This reality was compounded by the fact that Schwartz rarely vied for architecture awards and “never had critical good press,” as Stanley Tigerman—who worked as a draftsman at Schwartz’s firm in the fifties—stated in Schwartz’s 2007 obituary. Yet Schwartz’s buildings, with their modern forms, advanced engineering and surprising materials, suggest the architect can claim pride of place in helping define America’s midcentury architectural legacy.

His unfussy, pragmatic style and use of materials focused on livability and comfort, which also led Schwartz to be an early proponent of sustainability. His buildings include 320 Oakdale, a visionary co-op building that combines passive solar technology with a dynamic modern aesthetic, and a portfolio of leisure and hospitality work; most notably the Dunes Hotel in Las Vegas, which became a symbol of midcentury decadence.

The son of an engineer, Schwartz was a Chicagoan through and through: he grew up in Albany Park, went to the University of Illinois, and worshipped Frank Lloyd Wright. The native son will finally be celebrated at the Art Institute of Chicago, where his delicately detailed architectural drawings will be on view. (Brook Rosini)