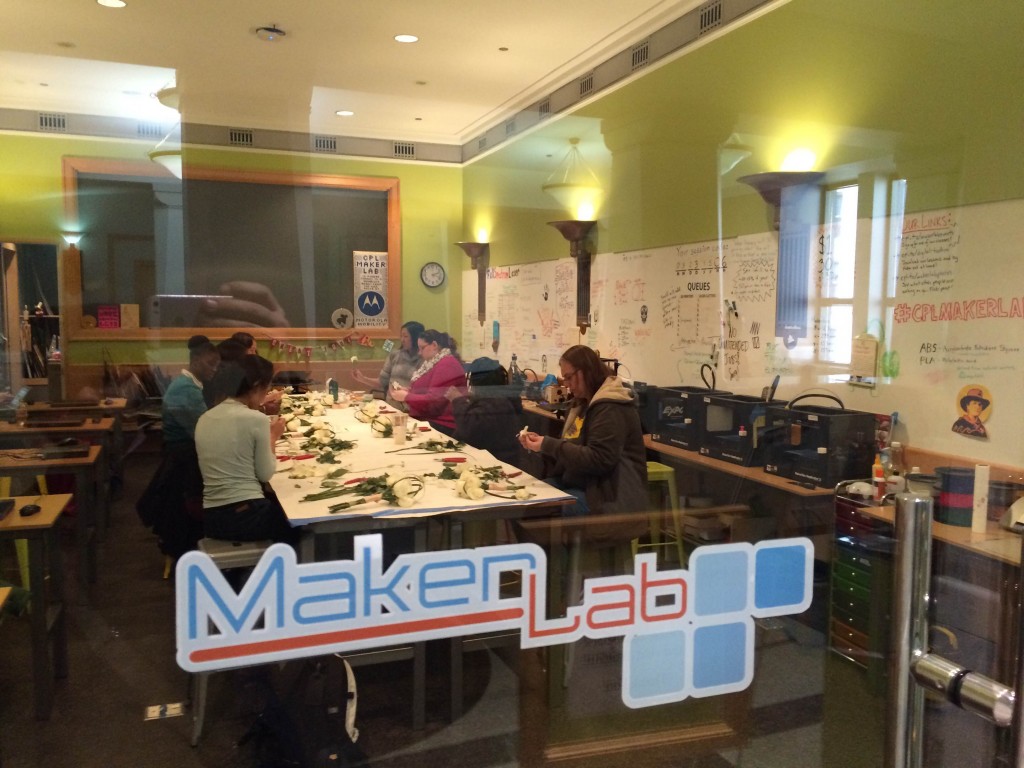 It often occurs to me that what today is referred to as the handmade and maker world is what we first-generation internet folks used to discuss as the DIY and alternative scene twenty or thirty years ago, before Gen Y rediscovered it. In many ways, that DIY scene was something those old enough to recall it likely thought long since co-opted by the mainstream; institutionalized, even. And so, among the many gifts of the Harold Washington Library is the Maker Lab on the building’s third floor.

After walking up a few banks of escalators, visitors will discover the Maker Lab behind a pair of heavy glass doors, nested in a smallish green room ringed with white wipe-boards scribbled over with details of class content; step-by-step instructions, interface operating info, that kind of thing. Metal stools sit strewn beneath the work shelves lined with monitors, printers, tools, the shelves ringing the entire room. There are digital design programs, 3D printers, laser cutters, vinyl cutters, milling machines and more available for use. Visitors can also schedule to attend workshop classes, or come in to use the equipment free-range on their own during “open shop” hours. “It can get busy,” says Paige Landesberg, intern in teaching assistance at the lab. “Wednesdays and Saturdays are entirely open shop, and our class times can have a full group of ten to sixteen, though there are also days when all day it’s just two or three people.”

It’s an extraordinary act of civil service to provision and operate the space, now around since spring 2013, for which the library received an Innovation Award that year. Access to knowledge and information is, of course, a proper part of the mission of any library. And that’s partly what’s compelling about the whole idea of the Maker Lab, how it evidences an evolution in thinking about the public-service mission of the library, a change from this kind of archive to actively providing ways to acquire skills in the use of, and direct access to, those advanced manufacturing and production technologies. Not only that, but also completely free to the public (advance registration is recommended), or at least very, very cheaply. “I’d say we offer the most affordable 3D printing option in Chicago,” says Landesberg. “It’s $1 per thirty minutes it takes to print your object, though we do cap printer use at two hours.” Not only is the use of the technology greatly affordable, the classes in their design, uses and implementations, as well as a menu of other DIY and hand-crafting courses, are also completely free. Subjects cover a wide range, everything from working with Arduino board electronics to make things like a drum sequencer, how-tos on writing your own programming code, folded-paper wedding flowers, and more. There’s also a litany of other types of events, including book discussions and a variety of “drop-in” events, including a chance to make “bust prints,” wherein visitors can have themselves scanned and three-inch busts of themselves printed on the spot. There’s also a “dino day” where children can have an acrylic dinosaur engraved with their name.

If getting down to the main branch is too much of a challenge, there is also a rotating “mini-lab” that travels around to various branches throughout the city (check the website for schedules), usually stocked with Up! mini 3D printers, Silhouette Cameo vinyl cutters, and a Kinect camera for scanning. None of this was really possible prior to the advent of desktop computing, the occasion of which also continues to revolutionize the function of even our most staid institutions, such as the library. None too soon, actually, since the recession has rejuvenated interest in the maker scene with thrifty-living waves of students and nouveau pauvre flooding the field. No longer a contradiction it seems, maybe there’s some hope our crusty old institutions could actually take some of the old DIY ethic mainstream after all.

Talk about taking the revolution mainstream. Owned and operated by Pilsen resident Stephanie Weiner, the Revolutionary Lemonade Stand offers hand-crafted clothing, housewares and jewelry that will elevate your Haymarket mojo. Operating out of both her Etsy shop online at www.etsy.com/shop/RevLemonStand and in her live/work storefront on Leavitt south of Cermak, Weiner makes fighting the good fight for justice as fun and sexy as you know it is. If you need a place to pick up those must-have Che Guevara onesies, or your own personal Ed Snowden fan-club membership button, she’s got you covered. There’s also some niche goodies you won’t find in general circulation, including her “Proud parent of a high school anti-war protestor” bumper stickers and an array of hand-bound journals with union sloganeering pamphlets for covers, and Audre Lorde quotes. Also a gift for the budget-minded, as most of Weiner’s wares are available for under $20.