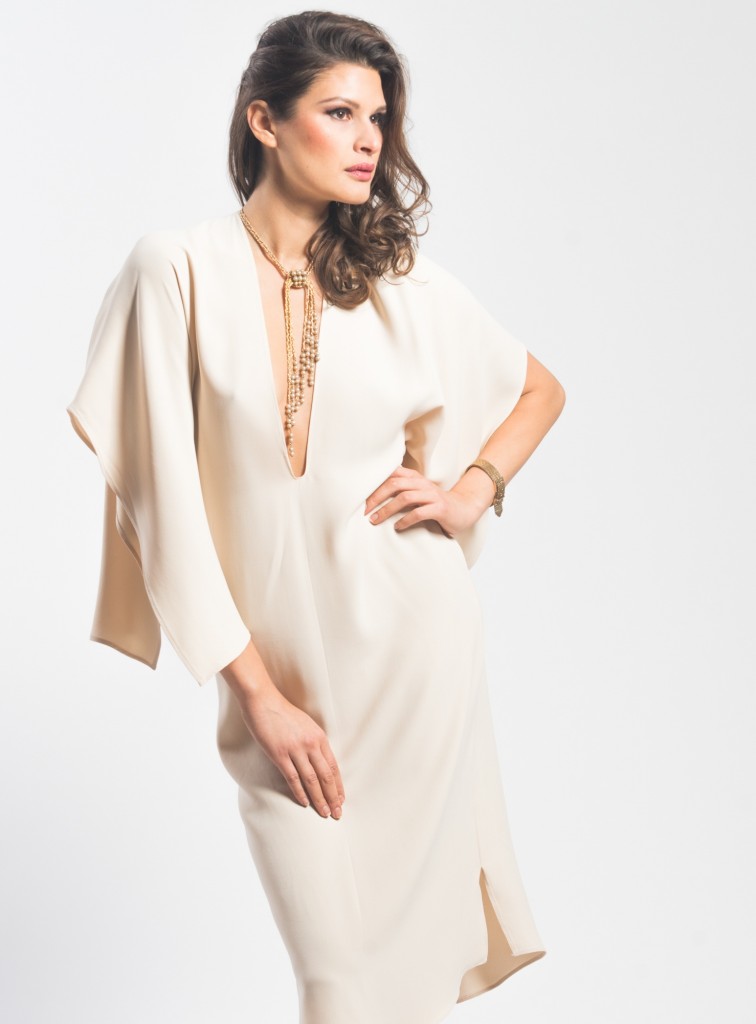 Alma Wieser began her clothing line, Renovar (Spanish for renovate) in 2005. Each collection is inspired by and pays homage to a different artist, artistic movement or fashion designer. Wieser researches before beginning the process of designing a collection, which are full of references to fashion and art history. Her studio space is at Heaven Gallery in Wicker Park, where she also works as art director. I had the chance to visit with Wieser a few weeks ago in her studio and to chat with her about her recent collection for spring/summer ’15: Halston and Warhol: American Celebrity.

How do you choose a theme for a collection?
It’s a feeling; fashion is so much a part of the moment. There’s the comparison of a fashion designer being a fortuneteller, that designers can see the future. I knew the seventies were coming so it had to be Halston. 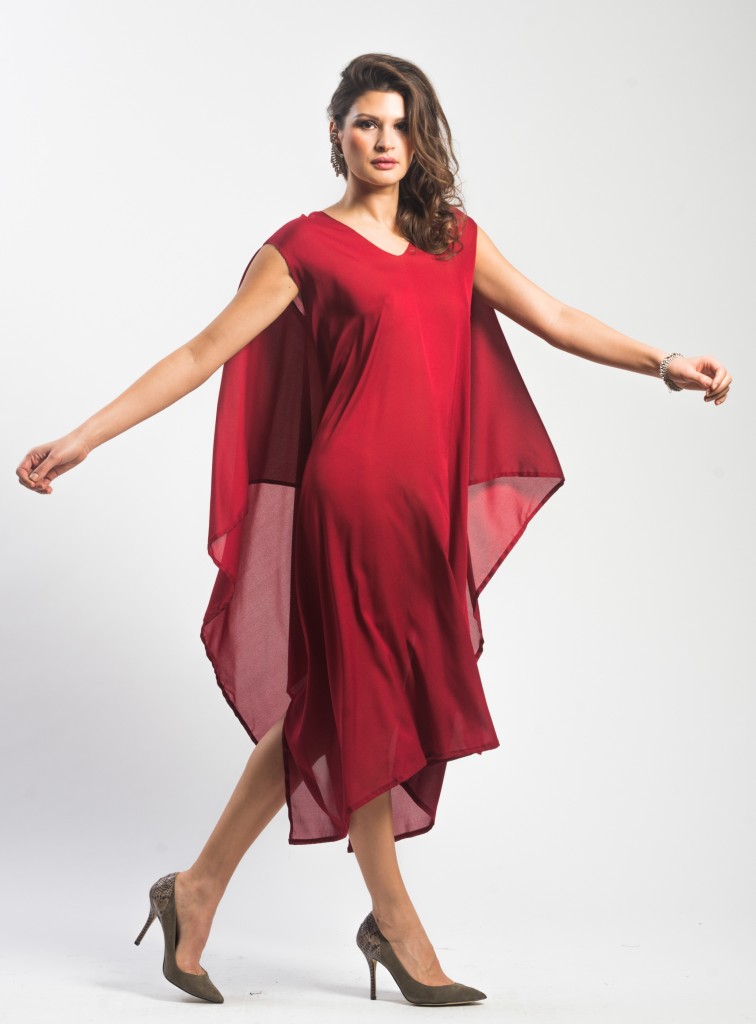 You mention that women are searching for Halston, in what way?
Halston simplified fashion; he was the king of minimalism and I think that’s what women are looking for now. Everything today is about comfort and simplicity; less is more. His tube construction was amazing, which is a giant piece of fabric sewn on a spiral. The dress on the cover of my lookbook is made using this method; you see it looks like a one-shoulder dress. That’s what’s so incredible about Halston; his designs are complex yet they appear to be simple.

Did this collection take more time than others because of that?
No, some of my previous collections had a lot of handwork or appliqué which is  intense. With my next collection for fall/winter, which is focused on Alexander Calder, I’ll be doing appliqué work and mobile neckpieces.

You also mention that all the capes and fly-away dresses in this collection are a reference to superheroes. How do you see women as superheroes?
As a fashion superhero, a woman who is daring, who is fearless, who can fly into a room and own it. A hero in that sense.

And Super Money, the logo you created for the Halston-Warhol collection, is a combination of Superman and dollar signs, what’s the significance?
Halston and Warhol were both obsessed with being rich. Warhol wrote the dollar sign on a Studio 54 napkin that resulted in his dollar sign series. It also symbolizes Halston’s climb to the top and his arrival to the Olympic Towers in New York City. Halston’s style was opulent. His home, his friends, his life was glamorous and Warhol was drawn to this. 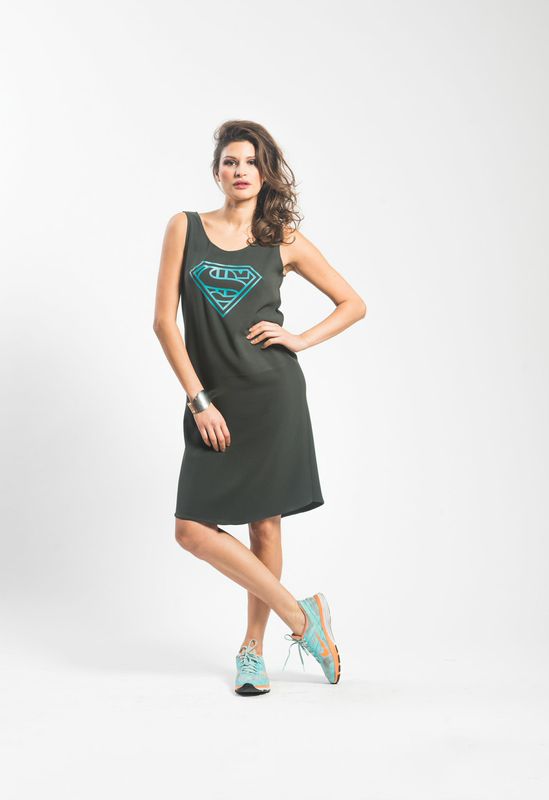 How does being art director of Heaven Gallery inspire your fashion design and vice versa?
You have to have an editorial eye, picking pieces that will go into an art show like when my husband David and I do studio visits and we choose art for shows. Some artists trust me enough to lay out the show. It’s that kind of eye for placement in both fields. Style is very similar to art.

How do you determine what collection you do next?
When I started Renovar there were so many collections I wanted to do and I still feel that way. For Calder, whose exhibit I saw at the Museum of Contemporary Art, all I could see were appliqué dresses and mobile necklaces. You know it when you see it. Halston believed that fashion was a slow evolution, more reflective of real evolution. I use a lot of the same silhouettes but slightly modified each season.

Have you considered creating a collection outside of this theme of art or fashion history?
No. People think that they’ll come up with something new and original but all ideas are built upon previous ones. There are all these secrets I’m trying to uncover, for example the secrets of tube construction. I wouldn’t say my clothes are exactly like Halston’s, but he was an inspiration.

Tell me about your process?
It’s research-based; it’s my way of furthering my education. My work is part historian, part fashion medium. When I was working on Halston, I dressed Halston and thought Halston. While I’m working on a collection, that person influences me entirely. Now I’m getting in a playful mood of Calder and the circus. You have to love what you do. I can be up until 5am sewing; it’s painful but I love it. When I get behind a machine, there’s this familiarity. Hand sewing is a meditative state for me; I’m in a rhythm and become kind of like a machine. 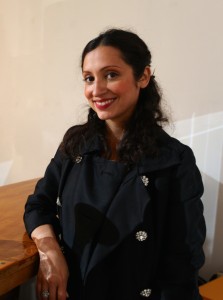 What role does fabric play in your designs? What are your thoughts on the use of synthetic fabrics?
I use all the same fabrics all the time: matte jersey, silk, and wool. But what I love about synthetics is that you can chill. When you’re wearing cream silk, you have to be so careful. Synthetic is more relaxed; it’s not the end of the world if you spill something. There’s a freedom to the wash and go of synthetics. But I believe in respecting your clothes, so I like natural fibers because you pay attention to the clothes.

The idea of renewal is in the name of your label, Renovar.  How do you feel about renewal in clothes, buying new clothes or not?
I’m funny because I’ll either buy vintage or designer clothes, super low-end and high-end. I also have this process where I’ll buy vintage clothes and test them. I’ll wear them to see how they behave, how they move and then I’ll make a pattern and alter it in my own way; so renewing in that sense as well.

And environmental concerns in fashion?
I have a lot of pieces that are A-POC, “a piece of cloth,” a method made famous by Issey Miyake. There are a few dresses in my collection where all I do is cut out the neckline or there’s no side seams. So I am definitely thinking in this realm, especially with custom fabrics like the Warhol-inspired bananas and lips, or the Super Money. I would say almost a third of Halston is A-POC. 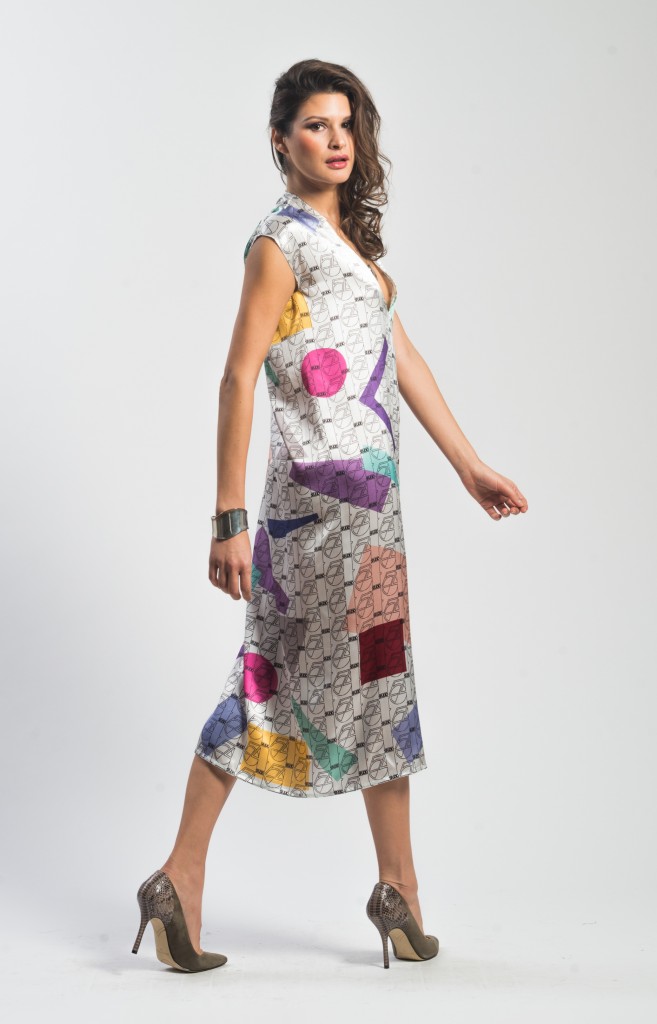 Do you still organize fashion shows to present your collections?
I’ve stopped doing them. The Vreeland collection was my last fashion show. It’s become a good business decision for me; it’s so expensive and stressful and I’m a one-woman act. For me, to be the dressmaker, designer, get the models and organize is too much. It seems to be a trend; a lot of designers have decided just to submit lookbooks to Style.com for this year’s fall/winter fashion week. For me, it just makes more sense to focus on the clothes. I’ll do another fashion show if someone else is paying, but for now I just want to put all of my resources into creating a solid lookbook.

Where is your client base from?
Mostly Chicago, but also New York. I’m getting into the niche of the gallerist. It only seems fitting for women in the art world to dress in art clothing. The director of threewalls, Shannon Stratton, I’ve dressed for her benefits. I’ll be dressing her again this year where the theme will be Surrealism. I have a couple tricks up my sleeve from the Schiaparelli collection.

Any particular pieces that have sold well for you?
Yes, less than five, but a big seller for me. It’s a beautiful cream jumpsuit from the Vreeland collection: it moves like a dream. I’ve thought about being competitive with prices, but I’m not interested in making many, I want my clothes to be editioned like art.

What are other important factors to you in your creations?
It’s about making beautiful clothes for smart women. I’m a big fan of Halston because of his dealings with his clientele. I love the idea of the designer becoming part of the woman’s life again. How many people have a designer in their life? That personal relationship is important to me and I feel like that’s been lost. Going to an atelier doesn’t happen anymore. I’m charmed by that tradition. 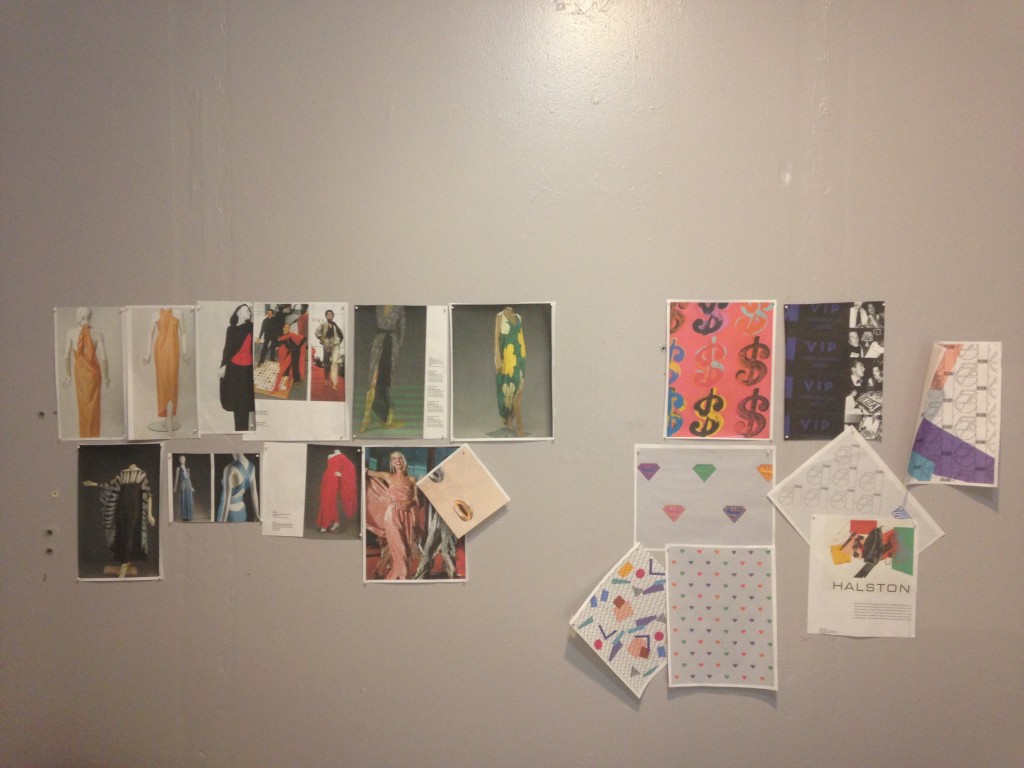