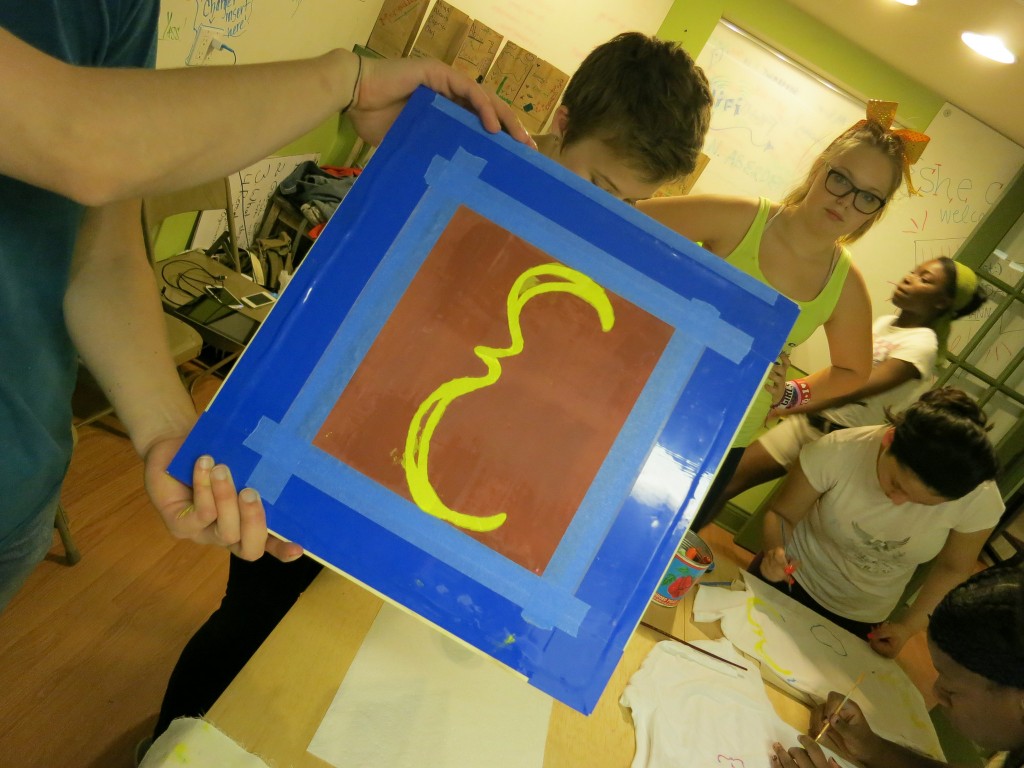 The “She Crew” meets at CivicLab

Among all the different types of maker spaces throughout the city, there’s really not another quite like the CivicLab in the city’s West Loop neighborhood. Operated by Tom Tresser and Benjamin Sugar, the space is a gathering place and laboratory for what Tresser describes as “civic science,” the enthusiasm in his voice rising as he seizes on a topic he is clearly passionate about, “we make Democracy here.” As a longtime public defender in the city, he is perhaps most well known for heading up the No Games Chicago initiative that opposed former Mayor Daley’s efforts to bring the Olympics to the city. On the day I visit, almost directly inside the door, I see familiar faces from my late-nineties activist days when I was living in the Dog Patch, including the engaging writer, social theorist and activist, Peter Zelchenko, still at it after all these years. Their Aberdeen office is an impressive split-level workspace with divided cubicle walls in the front and a conference room with large wipeboards on the second level. A row of interns from the U of C and the Peoples’ Institute for Housing Justice are lined up at a table along one wall, tapping away diligently on laptops.

It’s a maker space, no doubt, and they offer some of the amenities of the usual maker space, including office resource and space rentals (pay what you can currently, though they have a stated $200/monthly rate circulating as well). Tresser’s perspective on it is also rooted in an active civic engagement that he wants to integrate into the usual maker model, including offering up ways for people to access tools and community support. Sugar provides the media side. “I come from a civic media background, and in that community people are starting to embrace a lot of DIY technologies, beyond open data,” says Sugar. “We started asking how makers were seeing things, and we saw that they were understanding their world as physically malleable. When their chair breaks, they want to know how to fix it. What’s inside of something, how to repair it. People who are activists, they see their world as politically malleable, so one of the major questions we are asking as a maker-activist space is how those two worlds inform one another.”

Tresser also sees a cultural disconnect that needs addressing: “Usually there’s this idea that in order to have a great city, you have to have a great tech sector. And in order to do that you have to have these maker spaces, or accelerator spaces as they are often called.” Tresser explains. “So all the young white guys go there to try and invent the next Groupon and all the old white guys channel all their venture capital into it, and that’s what gets the press attention. But you know, we live in the same city as Jane Addams, the first American woman to win the Nobel prize and who founded the profession of social work, I mean, this was a woman who was against the Cuban war and Teddy Roosevelt’s Rough Riders, at a time when it was extremely popular. Right? This is a city of people like Saul Alinsky, the father of community organizing. That’s what we should give ink to is these efforts, we want to help people act intentionally in their area of politics.”

And they certainly have drawn the involvement of like-minded groups all across the city, working with an assortment that includes the Civic Legal Corps (civiclegalcorps.org), Dream Chasers Dance Company (facebook.com/DreamChasersFoundation), Moms United Against Violence and Incarceration (facebook.com/pages/Moms-United-Against-Violence-and-Incarceration/282859508528500), CodeCreate & The Global Cardboard Challenge in Chicago (codecreate.us), among a long list of other groups. Q4 Community Radio (que4.org) has also set up a studio in the space.

“We took a lot of inspiration from a book called ‘Make Space,’ which is Stanford’s text on how to make creative spaces,” says Sugar; “very influenced by design spaces so, in the same way that engineers know how to do it, people who are community organizers and people who are into technology too can work together to accomplish shared goals.”

Doing so to reach the greatest possible audience requires education outreach as well, so there is a wide array of wide-ranging projects underway in the space, with more than thirty-six workshops to date held at the space. “It’s all in the interest of giving people tools to interrogate their environment,” explains Tresser, everything from workshops on “Running for Office” and “Housing Rights” to tech sessions in the use of drones for aerial balloon mapping and DIY spectrometry (used in tracking industrial pollutants, for instance). Tresser and Sugar each also take pains to point out what is some pretty amazing work at reducing TIF statistics down into actionable data, a task that requires thankless hours of crunching numbers, which the team then makes available through its TIF Illumination Project (tifreports.com). Part of the outreach includes delivering the packets around the city to community action meetings, which the team has done extensively; there is also a TIF data store with byte-sized packets of information available through the CivicLab site.