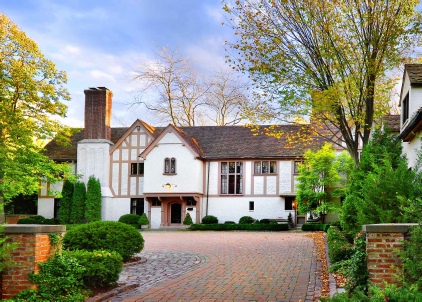 If you are not already a shelter magazine subscriber and a cable decorating show junkie, attending the Infant Welfare Society’s Lake Forest Showhouse [LFS] is probably not going to convert you. But it’s a pretty fine example of its genre.

It’s tempting to approach the very concept of a decorator show house with some degree of cynicism. The idea of taking an enormous house—one that is typically languishing on the real estate market—and letting loose teams of interiors professionals to finish off the various rooms in lavish and fantastical arrangements might suggest bourgeois foolishness and frivolous excess. So it may be surprising to realize the many redemptive features a show house offers: decorator show houses are extremely accurate indicators of current tastes and cultural trends; but mostly, they provide platforms for innovative stylistic ideas ranging from the baldly quirky to the blindingly glamorous.

LFS has a number of added qualities that elevate it above what you might assume would be its pretension or stuffiness—not the least of which is its connection to the film director John Hughes, who famously shot his great chronicles of American youth along the North Shore and lived in the house with his family until his untimely death in 2009. After attempting to sell the house, his estate opted instead to donate it to Lake Forest Hospital, which stands to gain upwards of four million dollars when the place finally sells. (Technically the house is off the market now, but you can check it out in its “before” state in pictures posted when it was last on the market, priced at $4.5 million.)

John Hughes probably could have made a great movie about the assembly of a decorator show house: lots of personalities, stiff competition and great visual flash. For the designers and decorators, it’s a really arduous undertaking—and an expensive one, but it’s great promotion: all over America, show houses attract audiences with the wherewithal and inclination to decorate—and hire someone to do it for them.

A friend who is a residential furnishings vendor griped to me that, because the decorative talent involved at LFS is so focused on attracting business that most of their treatments, while lushly executed and richly appointed, are generally pretty tame because they don’t want to offend anyone. She thinks a showhouse should be the residential equivalent of a couture fashion show—displaying edgy, avant, maybe even outrageous designs you wouldn’t necessarily wear (or live with) but that provide a rush of pleasure nevertheless.

She references the Kips Bay Show House in New York as a place where the designers and decorators routinely take risks. As it happens, the Kips Bay house opens this weekend and the NY Times’ T Magazine ran a feature spotlighting the most dazzling rooms from its last four decades which give you an idea what she’s talking about.

When it comes to edge, Chicago, and particularly Lake Forest, just isn’t Manhattan. And despite my friend’s whining about the generally safe approaches at the LFS, it offers numerous examples of great style—with the added bonus that many of the elements are available for purchase. (Like the price of admission, the proceeds benefit the Lake Forest chapter of the Infant Welfare Society, which has been mounting these events every other year for the last three decades. This eleemosynary twist helps turn what might be mere conspicuous consumption into a good deed.) 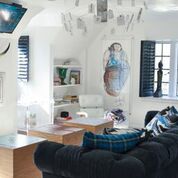 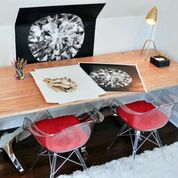 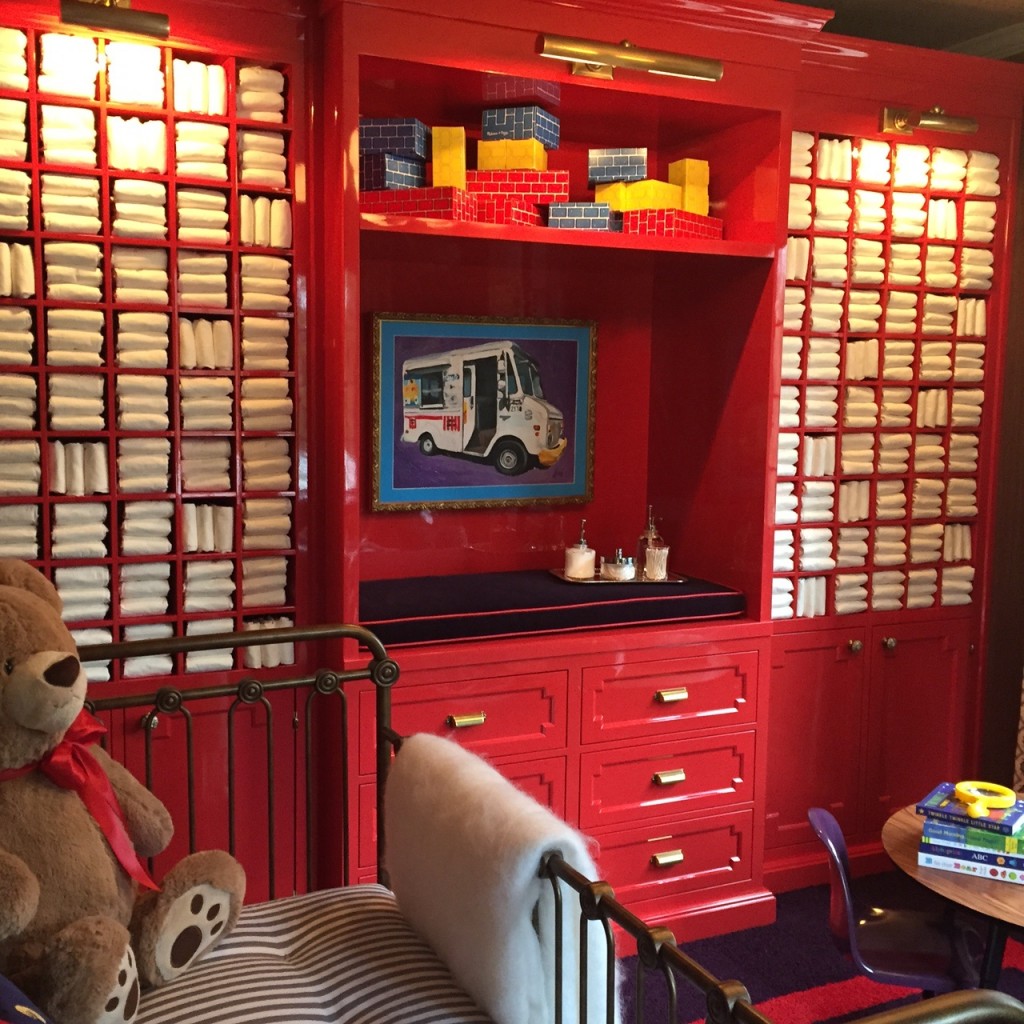 The red-lacquered splendor that designers steve + filip design envisioned in the nursery is probably so sophisticated that it would either sail right over the baby of the house’s head—or scare him. But it’s really great to look at, even though it would make more sense in your dining room or a smoker’s lounge. Similarly impractical in a baby-oriented environment, but hard not to like: the pillows made from Hermes scarves ($500 and $750).
  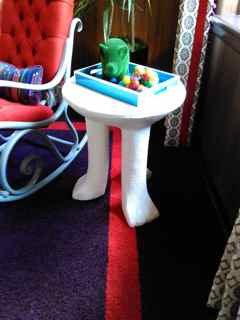 The most interesting element of the nursery, actually, is the John Dickinson-inspired feline-pawed table, made by the California manufacturer NOIR and available for $500. 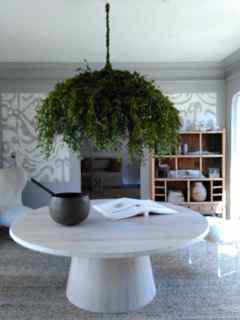 In the Garden Room, designer Michael del Piero asked her friends at Pistil & Vine to do something creative with a hanging light she bought online. The almost surreal “living chandelier” they created doesn’t illuminate at all—del Piero hid the room’s lighting in the ceiling cove—it’s a hanging plant that cleverly subverts the idea of a lighting fixture. The one at LFS isn’t actually for sale, but Pistil & Vine will re-create something similar.
  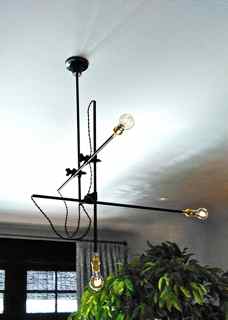 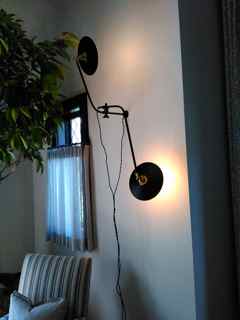 Real, functional light fixtures are actually among the most interesting pieces you can pick up there. I was particularly taken with the kinetic fixtures from the Brooklyn manufacturer Workstead that Andre Walker chose for the den (wall lamp, $1,050; chandelier, $3,200). 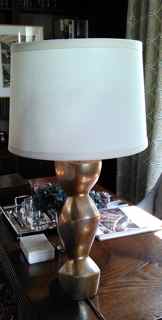 There’s a simple but beautifully sculptural bronze table lamp ($2,500) from Nancy Corzine that Liz McEnaney of E Claire Design chose for the library. 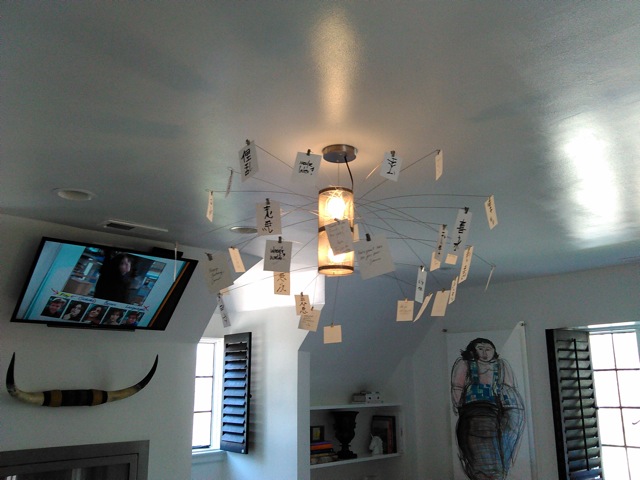 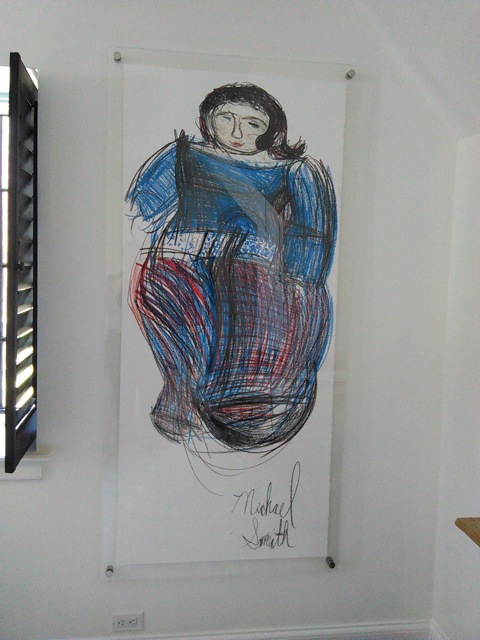 While most of the items in the house are functional and “decorative,” there are a few notable pieces of fine art. Back in the Teen Retreat (where you’ve got to wonder whether the theoretical teens who would hang out there would appreciate the level of erudition they’ve been offered) are two powerful pieces from Michael Smith, an artist whose work Courage & Co. discovered through the organization projectonward.org, a nonprofit studio and gallery for professional artists with mental and developmental disabilities ($500 each). 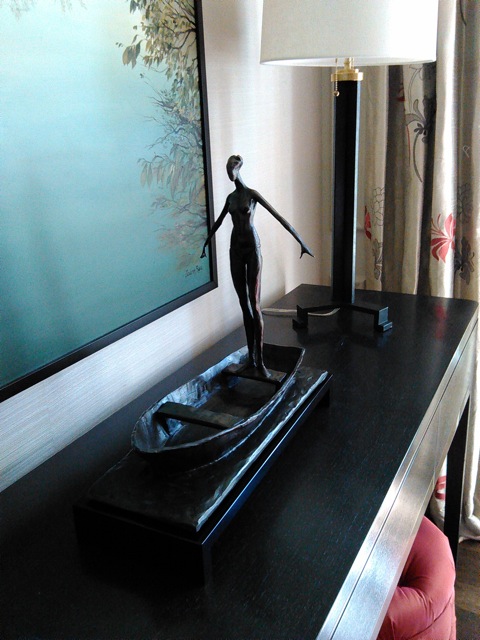 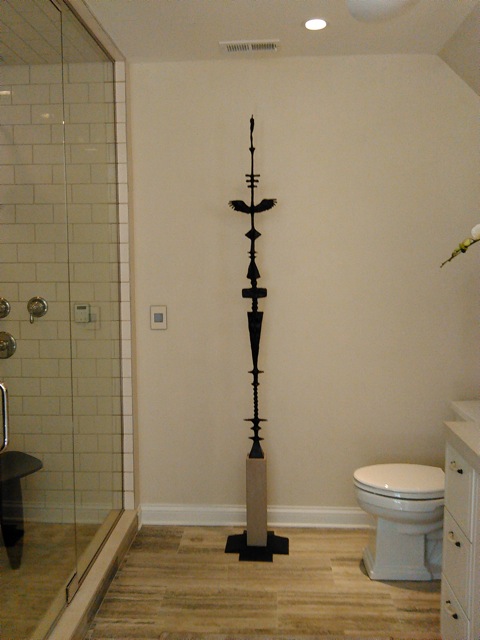 Bronzes from sculptor Tom Corbin, whose work is available through Holly Hunt, appear in both the master bath, where Randy Heller chose his totem-pole-like “Woman’s Rites” ($12,533) and in the dining room where Lori Lennon offered his “Girl on Boat” ($3485).

High glamour is one of the themes you’ll find throughout the house. The organizers conceived a story for the fictional family for whom the house is decorated: it’s inhabited by a fashion blogger. (Certainly we all know how lucrative a profession fashion blogging is, we shouldn’t be surprised that one could afford a $4.5 million house). 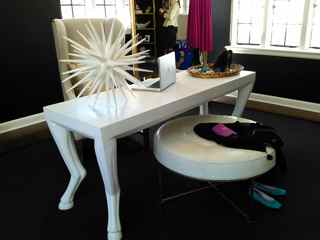 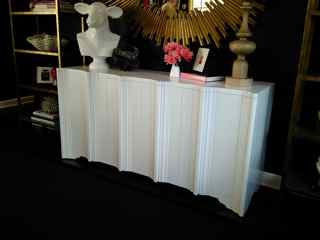 Like her teens, the blogger also has a retreat (What’s an “office?”), and Susan Brunstrum of Sweet Peas Design’s choices for the lady of the domain are haute Hollywood: the cast resin table with hoof, used as a desk ($2730), enamel buffet ($3930) and tufted leather ottoman ($2835), all from Oly. 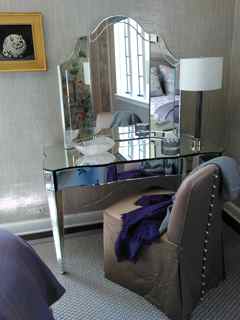 Similarly, in the guest room, Lawrence Boeder features a dazzling mirrored vanity table from L.A. design house Nancy Corzine—appropriately named the Harlow—that seems like it’s right out of a 1930s white phone movie. It could be yours for $6,980.
  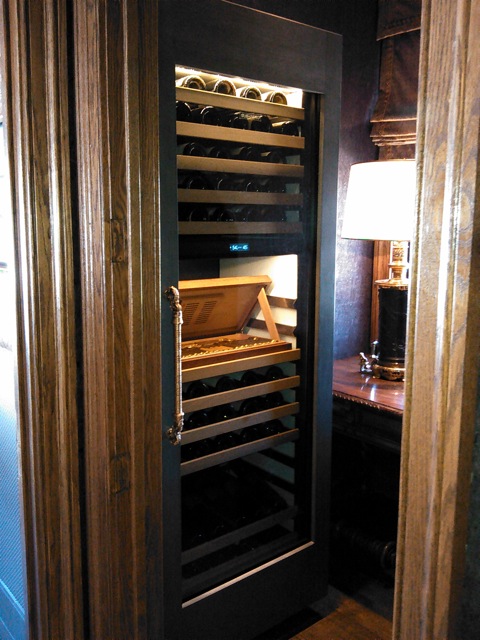 And for the blogger’s hypothetical significant other, of course there’s a “Man Cave,” where designer Joey Leicht has thoughtfully installed a wine refrigerator/cigar humidor combo from Sub-Zero (available at Abt for about $7,500).

Some of the choicest items in the house—a great antique game table in the library; a display of porcelain medallions under a glass dome in the master bedroom; a nice portrait of John Hughes—aren’t, regrettably, for sale. But that’s a good thing: in a dream house, some things should remain unattainable.

LFS is open through May 17.