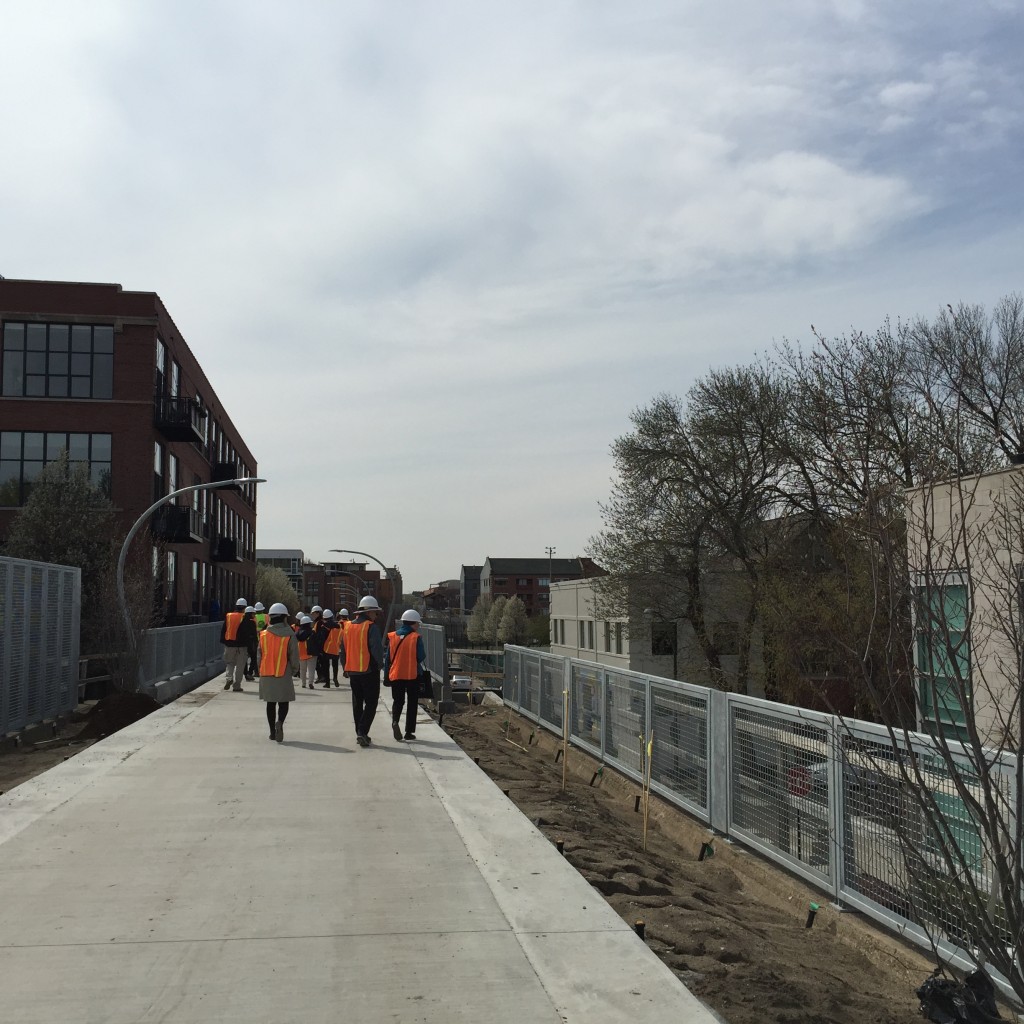 An initial plan for a long stretch of obsolete industrial infrastructure, the commercial railway known as the Bloomingdale Line, and dialogue between the City of Chicago and the Logan Square neighborhood—with the least green space per capita in the city—led to the founding of the Friends of the Bloomingdale Trail.

The vision and planning for what started out as the Bloomingdale Trail was a collaborative effort among community-based groups in Logan Square, Humboldt Park, Wicker Park and Bucktown, The Trust for Public Land, the City of Chicago and Chicago Park District. More than a decade in the making, The 606 Trail creates a 2.7-mile-long transportation system and public park between Ashland Avenue and North Ridgeway Avenue that will bring 80,000 Chicago residents within a ten-minute walk of accessible public green space.

The vision for the project fuses public art and design, history, an alternative transportation route and park land into a new hybrid public space for a city whose official motto is Urbs in horto and, unofficially, the City that Works. It’s urbanature: it’s beautiful, and it’s practical.

I had the chance to see The 606 in progress—and it was, indeed, still very much in progress—in April, on a tour organized by the Society of Architectural Historians during their annual conference. The tour leader, Jean Linsner, The Trust for Public Land’s Exelon Fellow for Education, brought us out on the Blue Line to Damen and Milwaukee—a ten-minute walk along Milwaukee Avenue to The 606. Donning hard hats and orange vests, we entered the site just east of where the new Milwaukee/Leavitt Park will serve as an access point to The 606. 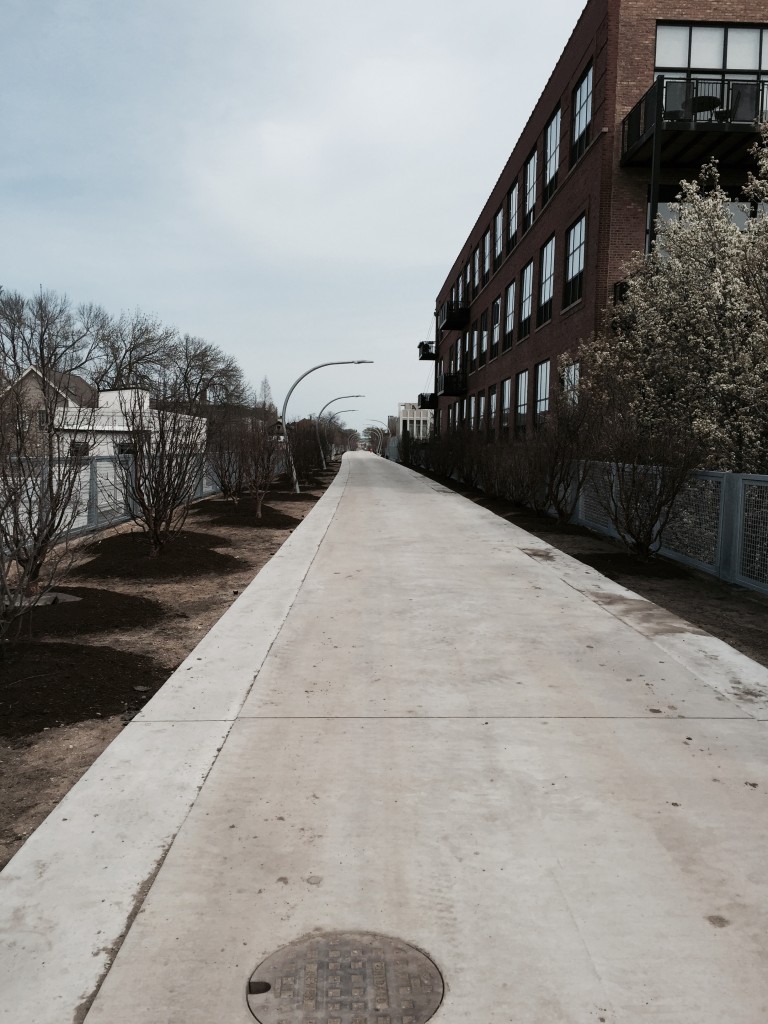 I have to admit to a certain disappointment when we first climbed up the seventeen feet of bare earth to the construction site. “Is this it?” I thought. “A sidewalk in the sky?” Explanations were quickly provided—one of many reasons for taking a guided tour—by our construction guide, Rich Kinczyk, manager of design and construction for the project, who used to work as a Department of Transportation Commissioner for the City of Chicago. Concrete was the pavement material of choice because, though costly, it will last 100 years and require minimal maintenance—an important consideration given the proximity and density of plantings, which might easily be damaged by maintenance vehicles.

More details and backstory emerged during our walk toward the east end of the trail, at Ashland Avenue.

The original Bloomingdale Line was constructed in the late nineteenth century, at grade level through Chicago’s west-side, industrial, primarily new-immigrant neighborhoods. On average, one person was killed by a train every day—mostly children. In 1910, the city council passed an ordinance requiring the railroad company to elevate their tracks by 1913. According to urban legend, at some point neighborhood residents showed up with tools to rip up the tracks themselves. The rail system carried cargo from industries we recognize today, such as Schwinn bicycles, which were manufactured on Chicago’s West Side. As we trekked up Milwaukee to enter The 606, Linsner pointed out a handsome condo conversion that once housed the Ludwig Drum Factory. If you didn’t watch the Beatles’ US premiere on the “Ed Sullivan Show” in 1964, the branding of Ringo’s bass drum is immortalized on YouTube.

Between Milwaukee and Ashland Avenues, and along most of The 606, the trail is fourteen feet across: ten feet for walkers and runners; four feet for cyclists. At expansion points, the trail opens up to, and in some cases connects with, existing areas for shady spots and picnicking, public art and text-based interpretation, groves and learning gardens, playgrounds and a wheel-friendly plaza, dog-friendly areas, and performance and event space. In addition to expansion of Walsh Park at Ashland Avenue, plans call for expansion points toward the western end of the trail system: at Julia De Burgos Park between Albany Avenue and Whipple Street, which will have a poetry garden and event venue; between North Lawndale and North Ridgeway Avenues, the location of the Western Trailhead Garden; and at Kimball Avenue. 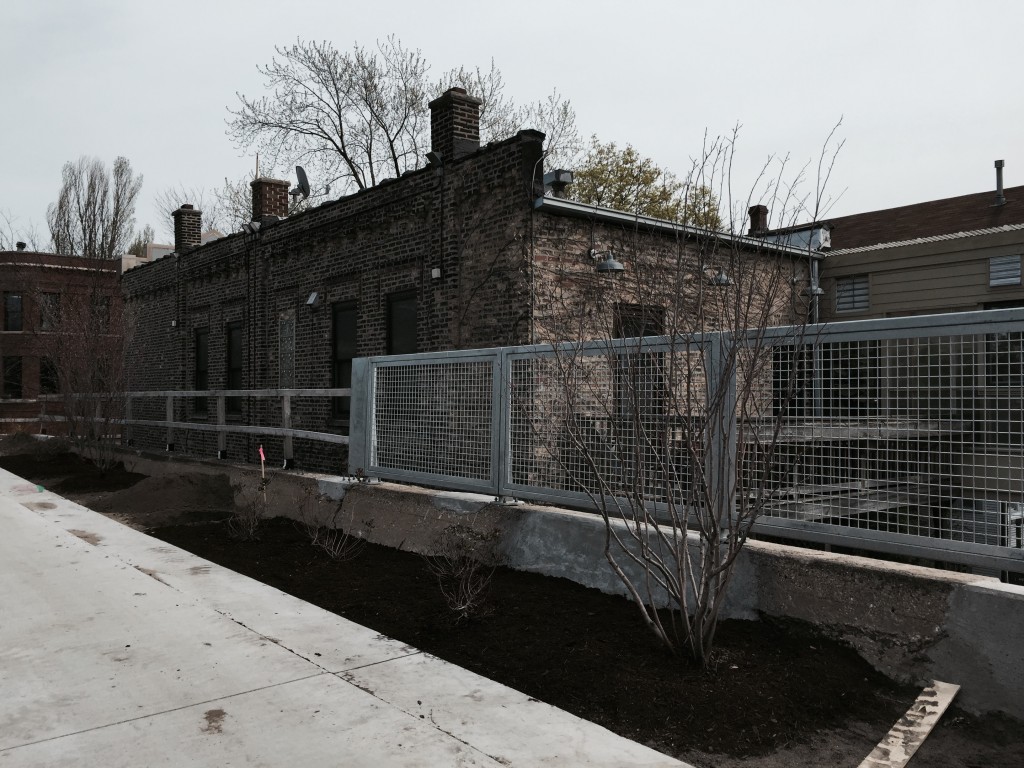 In addition to a picnic lawn and learning garden, Kimball Park will be the site of a solar observatory designed by SAIC professor and civic practice artist, Frances Whitehead, the commissioned artist for The 606. Whitehead’s concept was inspired by the oldest known solar observatory in the world—at Chankillo, Peru—where thirteen regularly spaced towers mark the great annual solar events. A notched system in Kimball Park will also align with the four major solar events: the Winter and Summer Solstices, the Equinoxes in fall and spring.

Whitehead worked closely with the project landscape designer, Michael Van Valkenburgh Associates, the firm who designed Maggie Daley Park. Many trees have been planted: sumac, poplar and paperbark maple. Serviceberry bushes are being planted along the length of The 606. Because of their temperature sensitivity, serviceberries will bloom in rolling succession from west to east along the trail—the plant phenology serving as a climate indicator to be studied from year to year.

This year, much of the groundcover will be seeded rye, which grows quickly. Landscaping details include this lush and luscious lineup of plantings: 1,469 shade trees; 567 ornamental trees; 4,248 shrubs; 53,050 perennials; 123,128 grasses and sedges; 12,474 vines; and 56,500 bulbs, including varieties of allium and narcissus, crocus, lily, scilla and snowdrops. 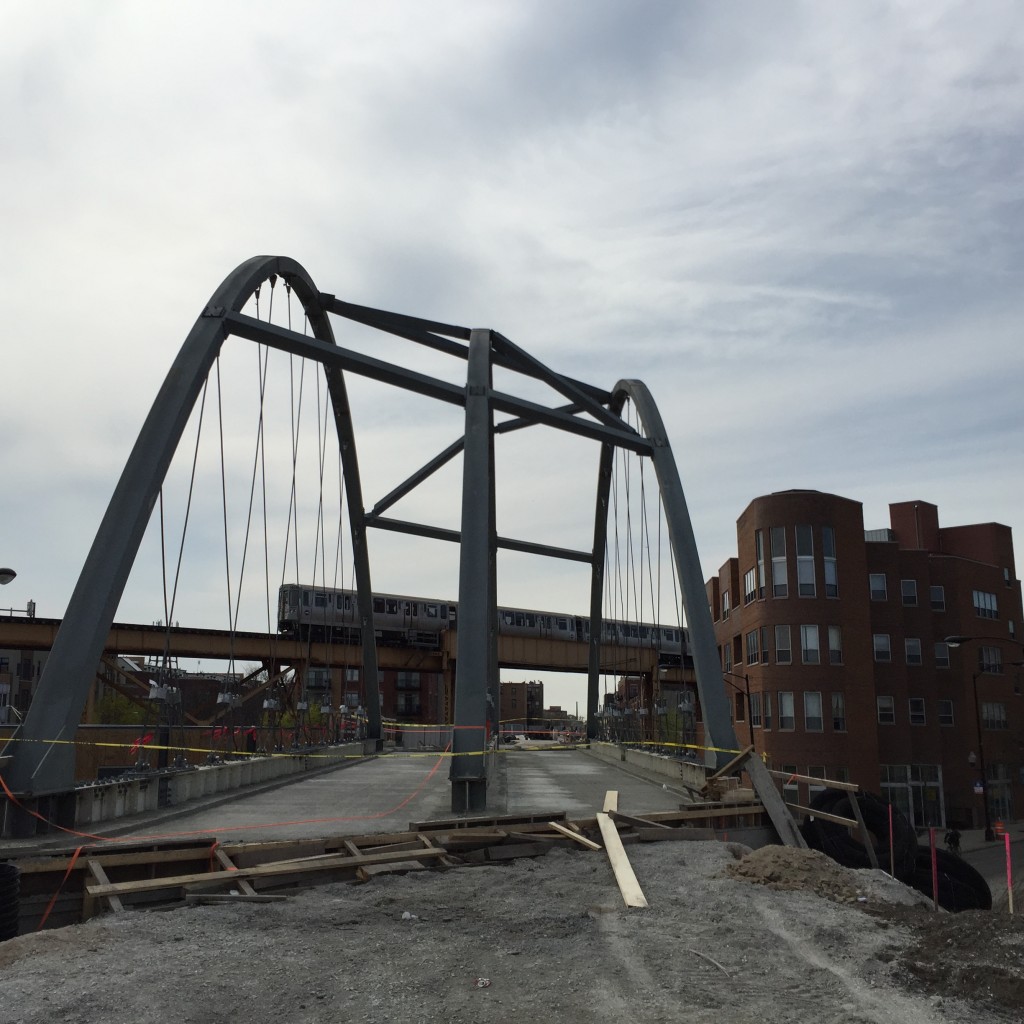 The 606 rests on an infrastructure with thirty-eight bridges, all of which, with the exception of the bridge at Milwaukee and Leavitt, are original. (The original bridges were built to carry eighty tons per square foot; they will now carry an estimated five.) The bridge at Western Avenue is a recycled steel bridge no longer needed at Ashland Avenue. In a dramatic display, the bridge was moved along North Avenue, one year to the day before our tour, by a transport vehicle similar to one used to move space shuttles.

The Milwaukee Avenue Bridge was constructed from an existing bridge deck, atop which a new tied arch suspension bridge was placed in early December. An engineering feat, tension cables hold the bridge in place. Piers that had supported the bridge from underneath were removed, allowing for an easier, safer traffic flow along Milwaukee.

Development of The 606 as an alternative transportation route, as well as a park, made the project eligible for federal funding from CMAQ—the Congestion Mitigation and Air Quality Improvement Program—and distinguishes The 606 from similar projects like New York’s High Line. The City of Chicago didn’t have required matching funds, so The Trust for Public Land agreed to raise the $12 million match for landscaping and maintenance. Toward the end of the tour, Beth White, director of the Chicago Area Office of The Trust, joined us, and we had the chance to meet the woman responsible for raising the balance of funds needed for this urban paradise. 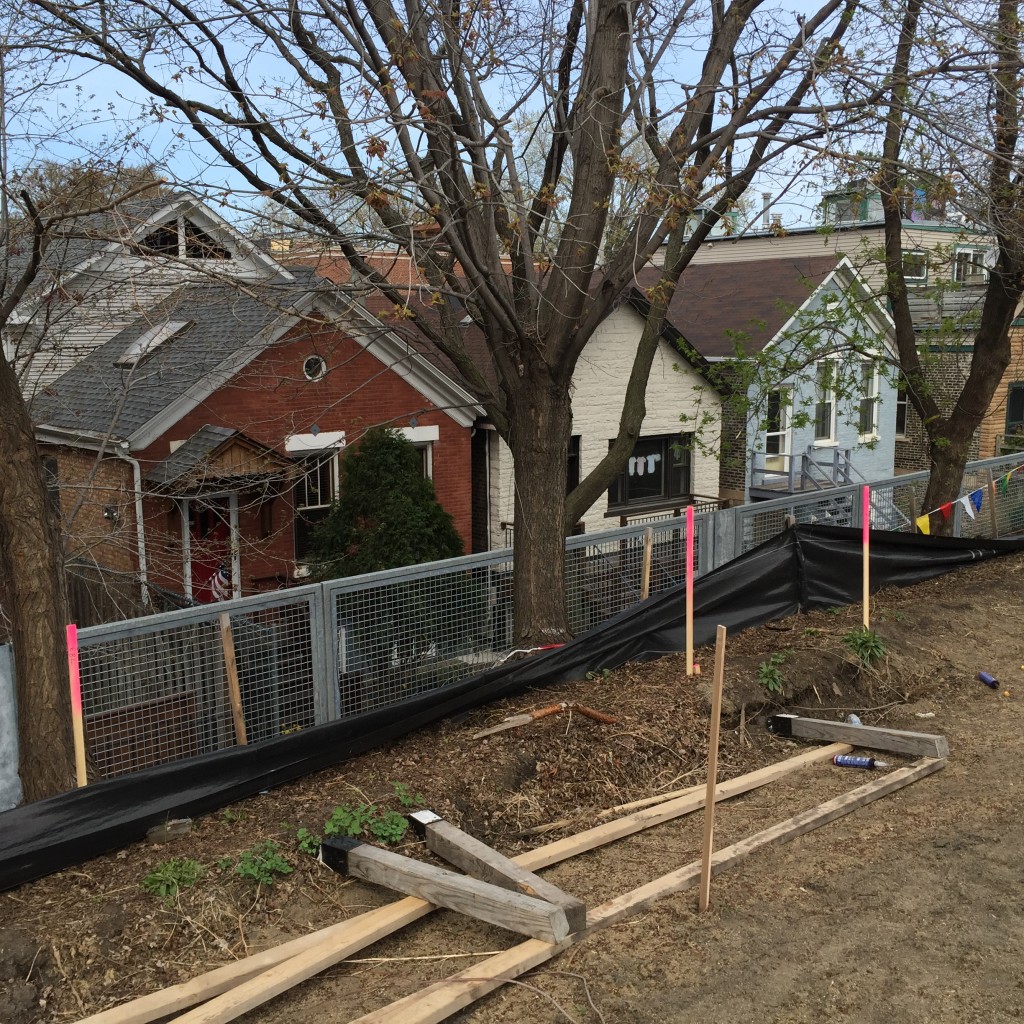 Whitehead, MVVA and Collins Engineers, the Phase II design team, created the Final Plan for The 606. The Phase I design team included ARUP, Carol Ross Barney, MVVA, Burns & McDonnell, and the Chicago Public Art Group, who translated the initial concept into a working design and engineering plan presented for public input in 2012.

There was something otherworldly about being on The 606. Images came to mind of new-world structures like Rem Koolhaas’ McCormick Tribune Campus Center at IIT and the concrete and stainless steel tube enclosing the Green Line track that passes over the building, and Helmut Jahn’s adjacent student dormitory, as did childhood images of the Jetson’s futuristic lifestyle. At other moments along the trail I felt a backwards pull, to medieval, walled cities, where passage along ramparts is cheek-by-jowl with residential quarters and cathedrals.

Certainly, The 606 Trail offers an entirely new—even radical—perspective on the city. Something happens at that seventeen-foot elevation between street and sky. We were parallel with the buildings. Not looking up, not looking down, we saw them differently. We became equals—an unfamiliar intimacy. As Linsner pointed out when we passed a condo building, someone lounging on their balcony might easily hand a drink to a passerby on the trail; close enough to raise a glass together, without having to raise their voices. 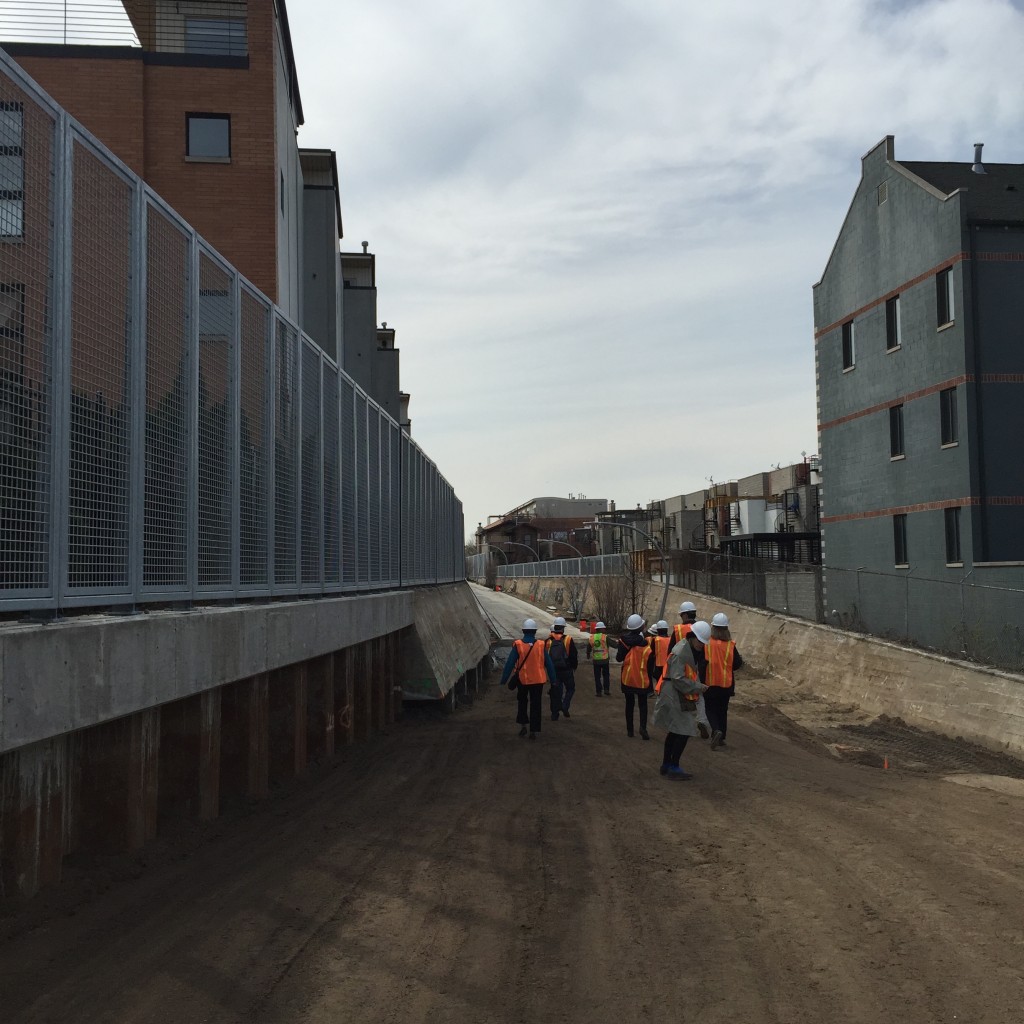 Chicago will have the whole summer to discover and play at The 606 Trail. We can then look forward to hearing stories about what people are doing and experiencing there, and what they will say about it, good and not-so-good. But what really interests this urban dweller, beyond the excitement of the immediate response people have to the new public space, is the effect The 606 will have on us.

Winston Churchill famously said, “We shape our buildings. Thereafter, they shape us.”

I hope the unfamiliar intimacy of this new, public thoroughfare that opens onto larger vistas and opportunities for shared experiences will create urban citizens more interested in engaging with and learning about people beyond our own circumscribed social milieu, people we might otherwise never meet or get to know. That we will become more curious about and careful of the gifts of nature lining that path, growing quietly in profusion around us. That we will become just a little more respectful, responsible and relaxed—giving as much consideration to the space we allow, and the face we show, others as to the space we feel we need to get where we are going—maybe not just as quickly as possible.

Given the investment in inclusive planning, vision and design innovation, and the attention to detail in the labor of love The 606 Trail represents, I think we will.

To learn more about The 606 Trail and the Final Plan, visit the606.org.