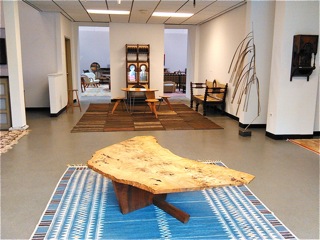 Attending the preview of a Wright auction is like visiting a design museum, but one where you can sit on the furniture and open all the cabinet doors.

It’s also a great educational experience. Its selections range from examples of iconic design classics familiar to many observers to extremely rare and obscure items that even the wonkiest design geek might not recognize. The whole experience is even more edifying if you get Wright’s senior vice president Michael Jefferson to walk through the showroom with you and elaborate on the goods, which I was lucky enough to do last week in advance of their upcoming June 11 sale.

Since its establishment in the year 2000, Wright has become the nation’s leading auction house for twentieth-century design materials. Over the years it’s become extremely selective in its offerings; prospective consignors are disappointed to discover it doesn’t sell standard “production” pieces, but rather, offers items that are unique or from very limited productions runs, prototypes, special commissions or rare survivors of once commonly available designs. The house gathers an astonishing volume of pieces designed by the great names in modern design from throughout the twentieth century, with a primary focus on mid-century work.

Among the designers whose work Wright continues to mine proficiently is Paul Evans, whose pieces from the 1970s and 1980s are hugely in vogue; this sale contains a particularly fine wall-hung 1969 welded front cabinet from the “Sculpture” line. [Pre-sale estimate: $150,000-$200,000] 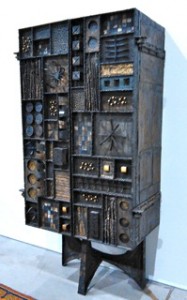 Like Evans, Vladimir Kagan remains a perennial favorite at Wright: in this sale you’ll find a pair of his distinctive splay-legged sofas and a marble-topped low table. [Shown in the exhibition space as a group, the pieces are offered as three separate lots. Pre-sale estimates: sofas, $5,000-$7,000 each; table $5,000-$7,000] 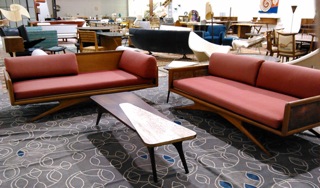 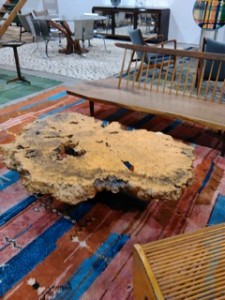 Jefferson says he thinks the single slab, free-edged French olive ash “Conoid” desk from 1987 might be the best example of this item in the entire Nakashima portfolio. [Pre-sale estimate: $30,000-$50,000] 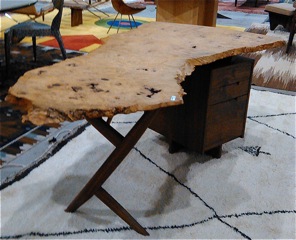 And while you’ve probably seen many examples of Hans Wegner’s “Papa Bear” and “Mama Bear” chairs, the example for sale here is simply called the “Bear,” with wider arms and more substantial proportions than typical, and with its original leather upholstery and ottoman. [Pre-sale estimate: $20,000-$30,000] 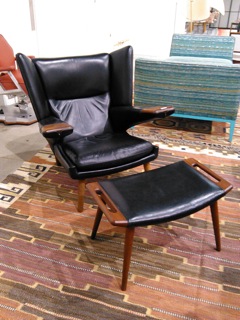 The house is also skilled in sourcing objects that represent innovations by important designers which never went into production. The 1940 wood dowel chair prototype designed by Harry Bertoia seems unrelated to his more famous wire-frame chairs and sculptures, but Jefferson says it’s an example of the designer’s experimentation [accompanied by Charles and Ray Eames] with accommodating the human form. [Pre-sale estimate: $10,000-$15,000] 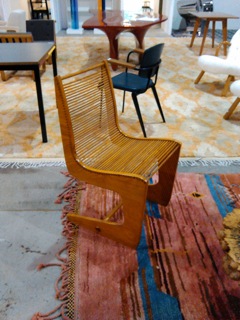 You also find important architectural fragments and elements. One of the most unusual offerings is a staircase removed from Le Corbusier’s 1958 L’Unite d’Habitation. Jefferson says that, while it could be used as a structural component in an interior, the consignor has been using it as a bookcase. [Pre-sale estimate: $20,000-$30,000] 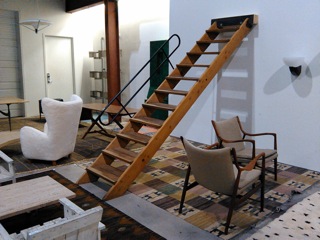 Wright also has championed more obscure players, like the Chicago-based designer Henry Glass. The auction house itself is at least partially responsible for creating contemporary awareness of his Swingline furniture of the 1950s, and this sale features one of his cabinets. (That’s Michael Jefferson demonstrating how the components swing out—thus the name of the line.) [Pre-sale estimate: $5,000-$7,000] 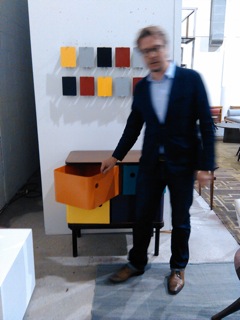 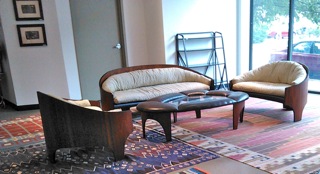 In many areas of collecting, condition is everything, but with modernist furnishings, it’s situational, says Jefferson. While collectors usually like items in original condition, some consignors may offer items—particularly upholstered furniture—in need of help. With a piece like this 1947 arm chair designed by Paul Laszlo, Jefferson says it made sense to reupholster it in something contemporary. [Pre-sale estimate: $10,000-$15,000] 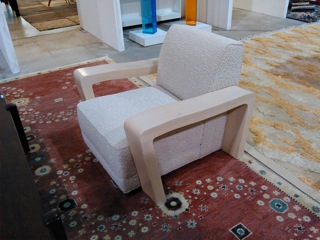 By contrast, the Gio Ponti-designed Distex lounge chair’s “Resinflex” upholstery fabric was newly developed when the chair was made in the 1950s. Jefferson says that the fact that it’s survived this long should support keeping it intact, even if it’s not perfect. [Pre-sale estimate: $10,000-$15,000] 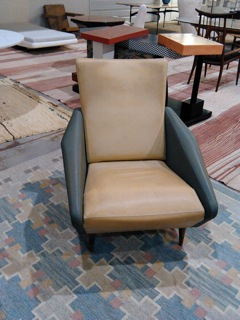 Another area where Wright excels is  the truly avant-garde, showcasing items that blur the distinction between what we think of as utilitarian design objects and those we call “fine art,” such as the 1954 couch from the Japanese designer Taichiro Nakai  [Pre-sale estimate: $30,000-$40,000] 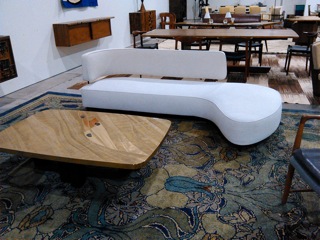 In its day, Nakai’s piece must have been comparable in impact to architect Zaha Hadid’s sculpturally ambitious Wave sofa of 1988 (which you can use with or without its wall-mounted backrest.) [Pre-sale estimate: $20,000-$30,000] 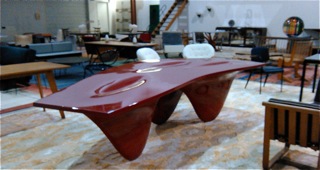 Wright also tries to stay ahead of the curve. While the interest in mid-century modern reached fever pitch at least a decade ago, Jefferson thinks more recent design movements, like items designed by the Memphis group in the 1980s, are still under-appreciated. Wright has featured several items from Ettore Sottsass, one of the movement’s leading lights, in its most recent auctions, with varying results. (Some of the Sottsass lots have gone unsold.) The current sale features his Acropoli console. [Pre-sale estimate: $7,000-$9,000] 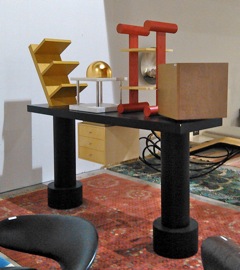 Jefferson says the real star of the sale is the 1949 “Rudder” dining suite designed by Isamu Noguchi and made for Herman Miller. Even by Wright standards, it’s exceedingly fine and rare. The stool seats, which Herman Miller would probably have made of molded plywood, are actually carved slabs; a low version of the table is much more commonly found. The consignors actually purchased the four pieces as separate lots in another auction, but were astute enough to realize that they shouldn’t break the set when it came time to sell. [Pre-sale estimate: $150,000-$200,000] 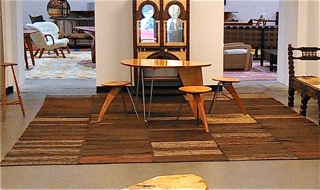 While the estimates on a group like the Noguchi sounds high for a table and chairs, design collecting is still a relative bargain compared to similarly important pieces of painting and sculpture. It’s hard to draw equivalents, but great masterworks of design can be had for a fraction of what you’d pay for “fine art.” The added bonus, of course, is that most design items are meant to be used, not simply admired from afar.

The design market hasn’t attracted the kind of collector that the market for fine art has, Jefferson believes, because it just doesn’t lend itself to the kind of bubble-like flipping activity we hear about in contemporary art. That may not be such a great thing for investors, but it certainly is for design aficionados.