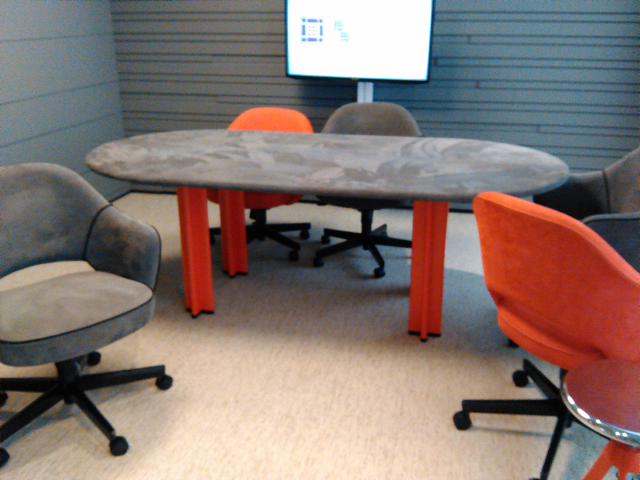 I’ve always had an issue with the way people abbreviate the name of the Merchandise Mart’s signature annual event. Most of the 50,000-plus people who attend “NeoCon”—how Merchandise Mart Properties Inc. has usually written it—have little idea what the name means; it stands for the National Exposition Of Contract Furnishings. Technically, the acronym for the largest commercial interiors show in North America should be NEoConF, which looks and sounds funny and probably would cause even more confusion than distinguishing between the current spelling and the political label it shares.

However you style it, it’s the biggest gathering of a $13.1 billion industry, according to the Business and Institutional Furniture Manufacturers Association, and took place this year June 15-17 at the Mart.

Most businesses who exhibit at NeoCon are unknown entities by name to the general public, but their wares—the conference tables, task chairs, storage systems, work stations and commercial flooring, to highlight a few—make up much of the furniture design people interact with in offices every day. 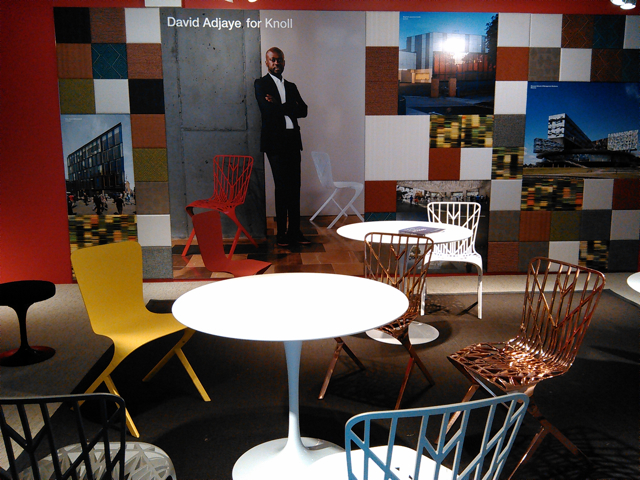 Some businesses that exhibit, like Knoll, Inc., have permanent exhibition spaces at the Merchandise Mart. Knoll uses NeoCon as a platform to introduce new, attention-gathering products—in an environment where there is a lot of competition for attention. Knoll’s star introduction this year was a new grouping by design superstar David Adjaye, the London-based architect said to be the frontrunner to design the 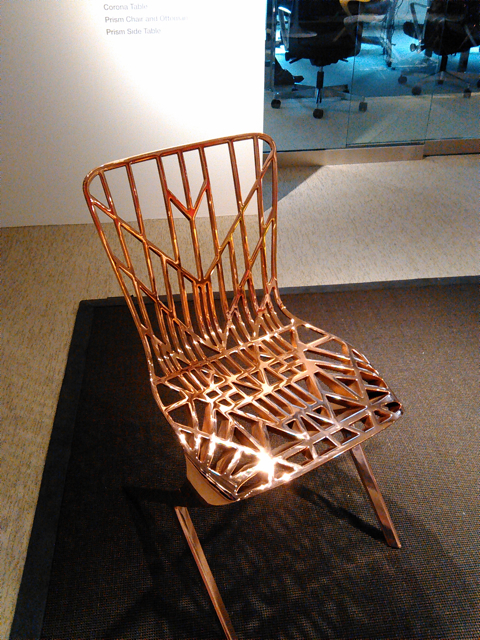 Obama Library. Last year Knoll introduced his “Washington Skin” chair, a cantilevered side chair of flexible, injection-molded nylon; this year, Knoll debuted (among other Adjaye-designed products) his “Skeleton” chair, available in powder-coated finishes and a dazzling metallic bronze, and suitable for either indoor or outdoor use.

Herman Miller is another big presence in the industry with an equally large presence at NeoCon. This year, to illustrate its cheeky new theme of “Sitting is the new Sitting,” it mounted a display that looked like a storage room in the company’s archival facilities, cramming just about every one of its iconic seating offerings into the display, from classic designs by Charles and Ray Eames and George Nelson to more current examples by Yves Behar. 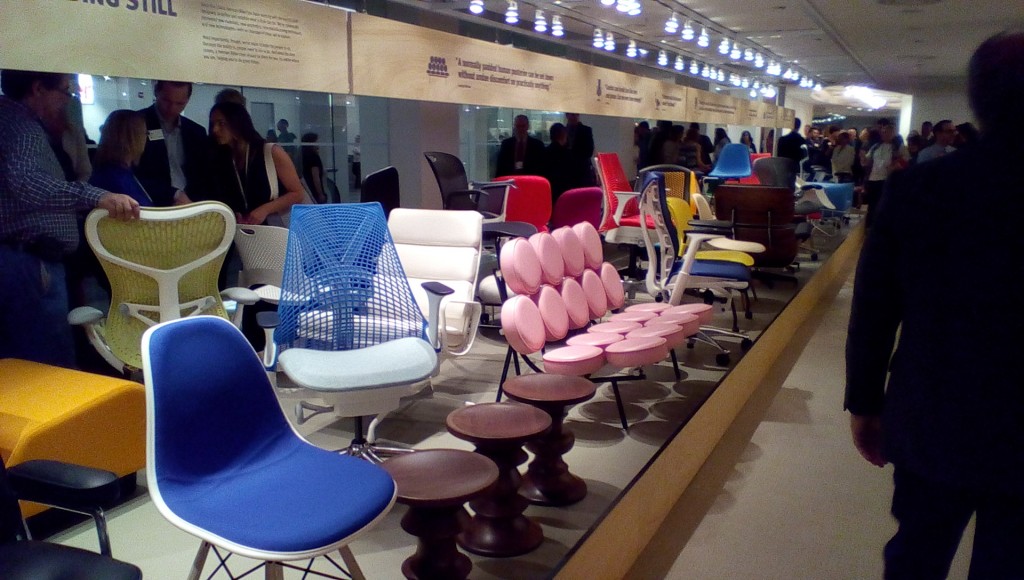 Other industry heavy-hitters are less well known to the general public. KI Furniture hyped its Sway Lounge Chair and Ottoman by asking you to take a selfie in the chair and send it out on social media with appropriate hashtags. Apparently this was an effective ploy, because—according to a post on its Facebook page—it was the “most tweeted about product at NeoCon.” 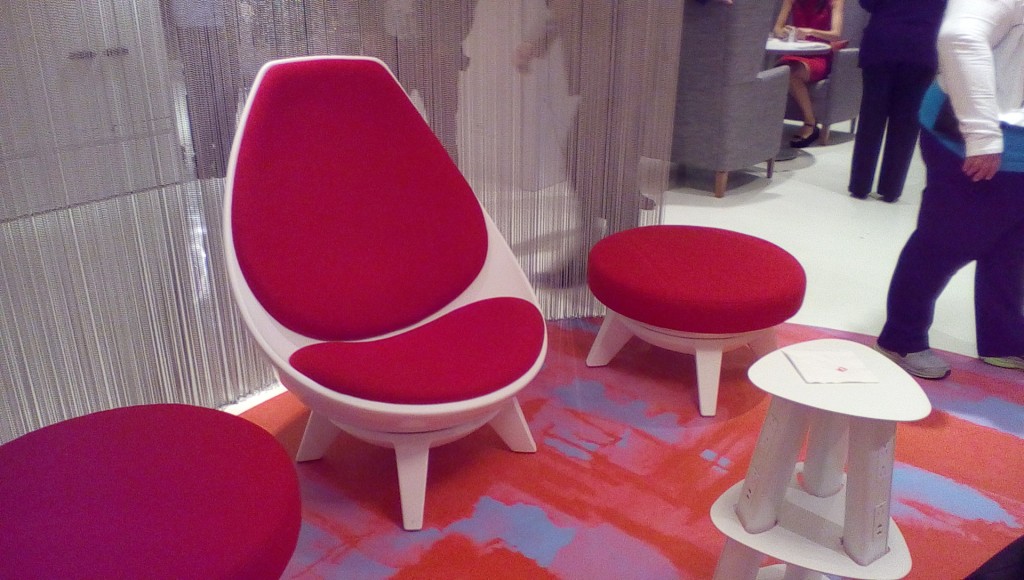 Luna Textiles also runs a popular promotion every year in which winners vie for a special item made from their goods. In previous years, these have included backpacks, tote bags, hat boxes and briefcases; this year, they gave away a stylized yoga mat case. 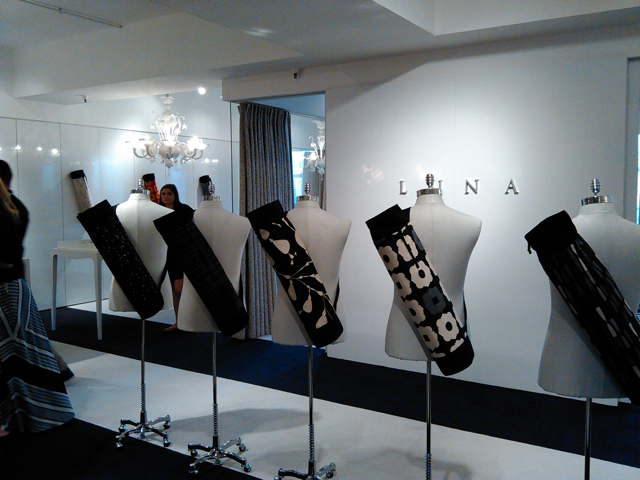 One of the more intriguing aspects of NeoCon is tracking the intersection of residential and contract furnishings and spotting contract-furnishing solutions that work in a residential setting. Although they’re ubiquitous in auditorium and classroom settings, it probably wouldn’t occur to you to install flip-up, theater-style seats in your house. JumpSeat Studio wants to bring seating more typically found in auditoriums into the home. And it’s easy to see how this ingenious device would be a great solution in many kinds of “transitional” spaces—a front hall, a mud room, a dressing area. 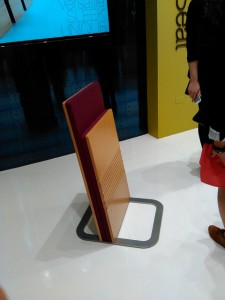 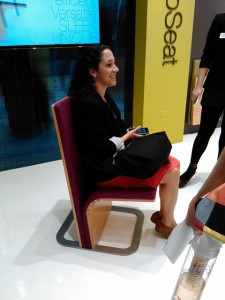 Other major manufacturers are posing a challenge to Knoll and Herman Miller in the residential crossover arena. Grand Rapids-based Haworth recently acquired the high-end Poltrona Frau company, which brought with it Cassina’s line of classic Le Corbusier designs, customizable in a variety of frame finishes and leather upholstery choices Corbu would most likely never have recognized. 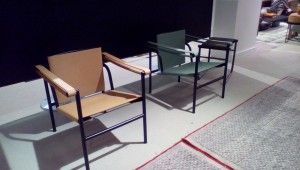 Similarly, several of the pieces from Teknion’s collaboration with B&B Italia—like the mesh Iuta swivel chair—would look swell in many contemporary homes. 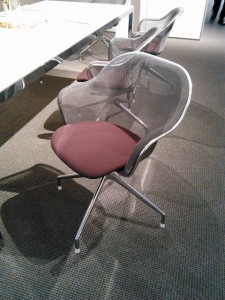 Coalesse offered an extensive line of Hans Wegner designs, made in Denmark, through its partnership with Carl Hansen & Son. 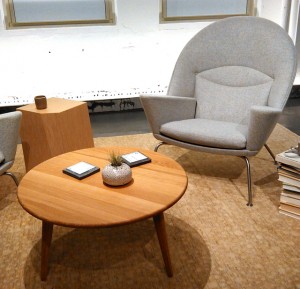 Much of what makes NeoCon a real trade show are the exhibitors on the Mart’s “market suites” floors—open exhibition space with the kind of booths you expect at such an assembly, and where smaller, often single-product enterprises vie for exposure.

Two things immediately stand out when roaming this area: the display of all manner of commercial flooring and, secondly, desk chairs, many of them imported from Asia and most indistinguishable from the rest.

But among the dross are a host of innovative, inventive items, many illustrative of both design innovation and entrepreneurship.

The Finnish company Framery Acoustics brought its Phone Booth—an innovative take on repurposing a now-quaint artifact of twentieth-century communications [and comic-book iconography] for utility in the open-office environment. 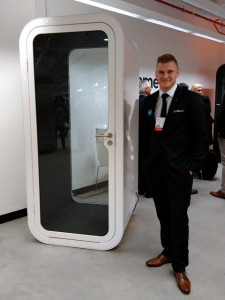 Samu Hallfors and his “phone booth” for Framery Acoustics.

Company founder Samu Hallfors was working as a computer programmer where the boss was a phone screamer. When the employees complained, the boss tasked Hallfors with finding a solution. Unable to find anything in the contract furnishings market, he designed one—an acoustic booth that accommodates one person for the simple purpose of making a phone call—and had it fabricated. 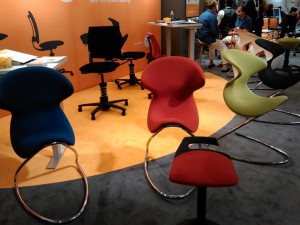 One seating option that really stood out from the rest was Via Seating’s Oyo chair, which is designed equally for use facing forward, sideways or back.

Sustainability and an overall green ethic is generally quite pervasive in the contract furnishings industry. The Zee Head chair from Eugene Stoltzfus Furniture Design cleverly and stylishly appropriates the cantilevered designs of Gerrit Rietveld, fabricated in bamboo—whose qualities permit its construction without blocking, plates or pins. 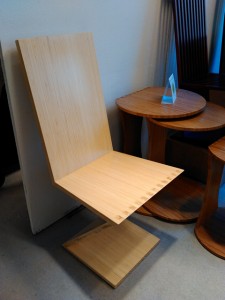 Green Furniture Concept won a Silver award at NeoCon for its organic Leaf lamp. a hanging fixture that is both a light source and an acoustical element. Designed by Australian architect Peter Schumacher and manufactured in Sweden, it seems to suggest a soft-sculpture subversion of a Dale Chihuly installation. 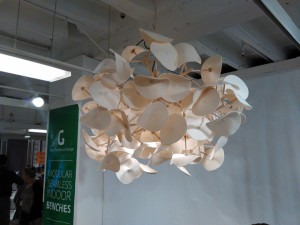 Mosaico Digitale is a plastic resin wall covering made in Italy that channels mosaic tile. As its representative reminded me, mosaic tile was the first pixelated art form, so the digitizing of images in mosaic format is in some respects ancient, and its translation into a photographically printed, mold-extruded medium a great innovation. The company exhibited a design by Karim Rashid, but can customize based on any digitized image. 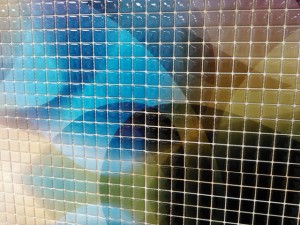 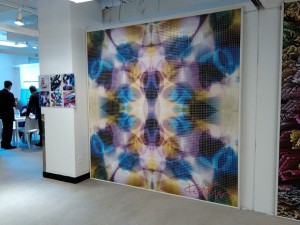 Despite the preponderance of Asian-made desk chairs as referenced above, it’s refreshing to note how much of the contract product mix is still manufactured domestically, much of it in the Midwest. Many of the biggest companies—Herman Miller, Haworth and Steelcase—are all based in western Michigan.