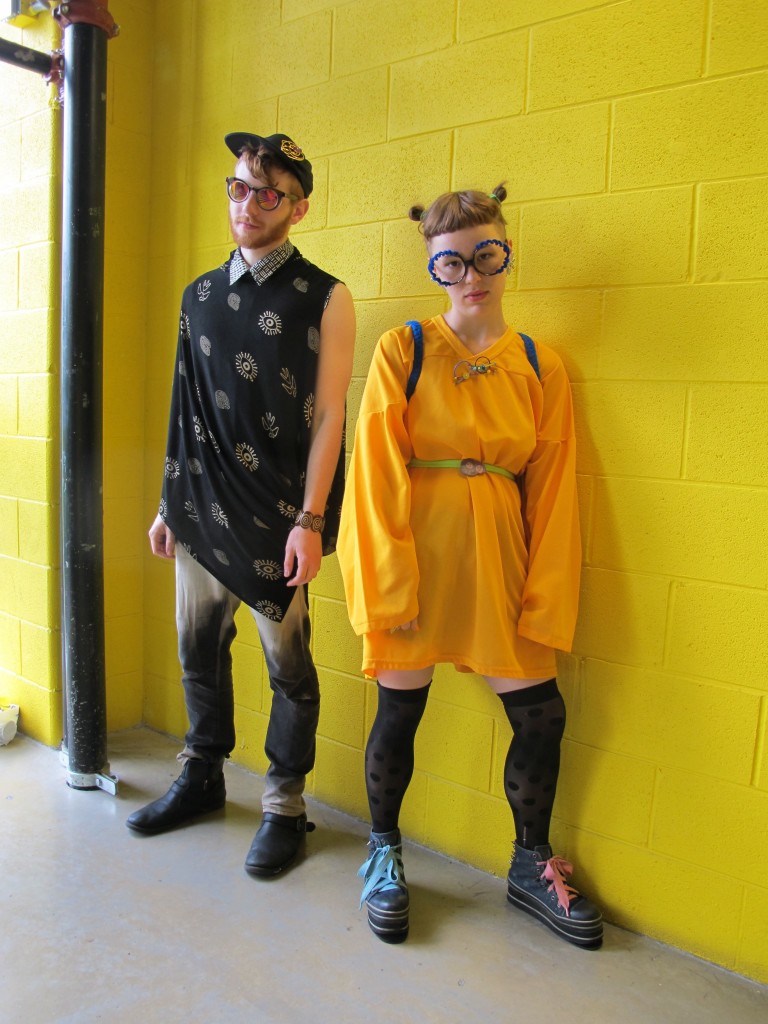 What inspired your outfit? Could you tell me more about what you are wearing?

Louis: This is one of my favorite pieces of clothing—a sort of oversized stretchy shirt with a really cool occult-looking runic eyeball print. I wanted to do something a little different with it, so I put my head through one of the armholes to make it look like a sort of drapey shawl instead of just a t-shirt. I like mixing prints, so underneath I wore a busy button-up that I’d made sleeveless so that the patterned collar would show from under the other shirt. I wear blacks a lot, but almost all of my black clothes have prints or designs on them to make dressing more interesting.


Ashley: The most direct inspiration comes from an artist and clothing designer I found on Instagram recently called LactoseIntolerArt. They do very nineties, cartoony, sort of Rocket Power/Rugrats-ish illustrations on big shirts and such. They draw a lot of characters with goofy glasses, so my specs are definitely a ripoff of those—I wrapped a couple pipe cleaners out of some novelty glasses I popped the lenses out of. Basically, everything I wear I find at different thrift stores throughout Chicago. My oversized yellow sports jersey I bought for an alien theme party a while back. I cut a strip of acid green fleece we had lying around and used a pin of some cartoon faces as a belt buckle. My style is very, almost obnoxiously, colorful. It’s cheesy as hell but, for me, so much of the world is so dark and sad and colorless, so I make it my business to try to introduce some color and brightness to things. I’m kind of just a geeky clown that way.

Louis: I joke with friends that I’m always dressing up in a different sort of wizard costume every day. I think I was definitely going for something like “evil shadow psychic.” The pin on my hat is from my giant collection of brooches and accessories—there are so many beautiful and ornate pins just lying around for cheap at the thrift store, and I like using them in interesting ways like attaching them to hats, collars or even shoes. The pants are an old pair that I just recently dip-bleached to give a gradient sort of effect. I’m not a genius at construction or making my own clothes by any stretch of the imagination, but I do think it’s fun altering things to fit differently or using dyes.

If you were a comic character, who would you like to be?

Louis: If I had to pick one illustrator whose characters have definitely been a huge influence on my style, it would have to be Yoshitaka Amano. He’s a Japanese illustrator and comic artist, but he’s really well known in America as the concept artist for the Final Fantasy video game series. His designs are so gorgeous and intricate and full of beautiful patterns, overflowing with detail but in such an intelligent way where everything works together and feels cohesive. I’m a huge lover of detail, pattern, and intricacy in general—and also a huge video game dork.

Ashley: I can’t necessarily think of a single character I would be, but I think I’d definitely be something from a Michael DeForge comic. He has just the right amount of painfully-bright color, psychedelia and existential thoughtfulness in his comics, all of which I’m all about.