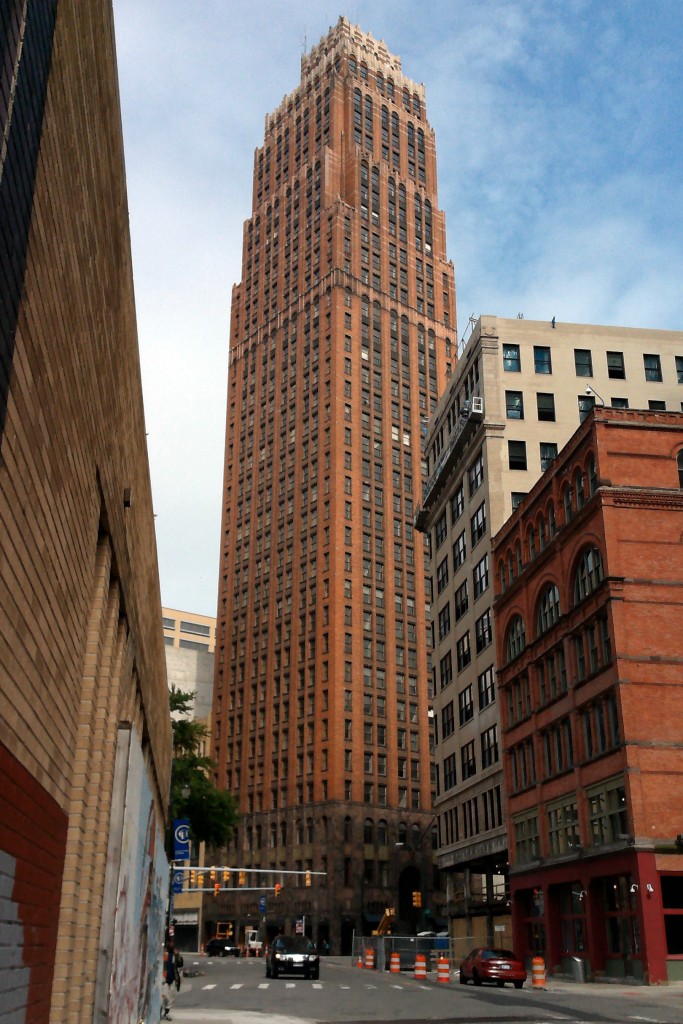 Growing up in Chicago, I took my neighboring cities for granted. I had a better knowledge of Paris than Springfield. Returning to Chicago after having spent my adult life on America’s coasts, I determined to meet my neighbors.

Milwaukee and St. Louis are now favorite places to visit. I could talk for hours about the food, art and architecture in Cincinnati and Kansas City. And then there’s Detroit, the quintessential underdog.

You may have heard of Dan Gilbert, the wealthy entrepreneur behind Quicken Loans and many other ventures, who made news several years ago when he announced Quicken would move from suburban to downtown Detroit. Since that announcement, Gilbert has acquired more than seventy downtown properties amassing more than eleven million square feet, according to Rock Ventures, his umbrella corporation. In addition to real estate and Quicken Loans, Gilbert is involved in software, branding, manufacturing and managing public spaces.

Last month, I went to Detroit with a few questions about Gilbert’s move into the city. They were specific to Detroit, but also relevant to my favorite Midwestern cities listed above and, perhaps, all of America.

America has always been engaged in a debate about the boundary between the individual and the collective. More recently, this has taken form as an argument between corporate powers and benefactors and the “state.” What happens when the latter is not a proper steward of the public realm? What is Gilbert doing in downtown Detroit? What is his responsibility to Detroit? And what is the City of Detroit’s responsibility? 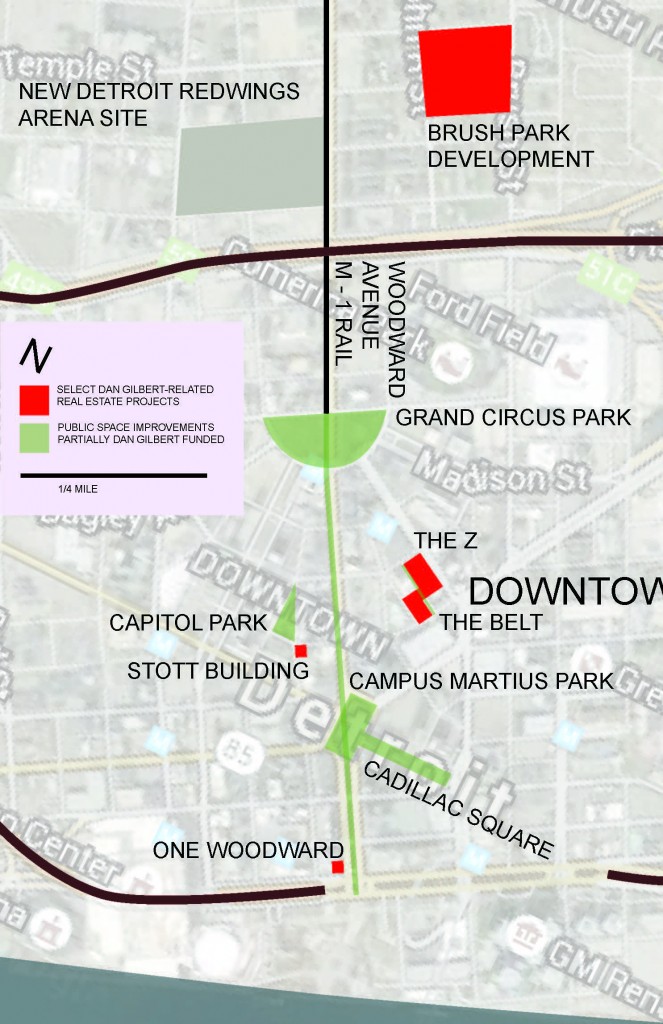 Namely, in the struggle to revitalize our cities, what is the public responsibility and what is a private concern?

I went to Detroit to try to answer these questions and objectively assess Gilbert’s fingerprints on Detroit by focusing on three aspects of his reach: his approach to the preservation of historic structures, the quality and design of new real estate developments, and public space design and management.

Buildings, beautiful or not, remind us of our experiences. Detroit, having suffered from decades of disinvestment and the loss of more than half of its population, is missing much physical evidence of its past. To his credit, Gilbert has not demolished anything as he has acquired properties in Detroit.

Gilbert’s portfolio is eclectic, including small late-nineteenth-century buildings up through more recent high-rises. Recently he purchased the David Stott Building, a vacant 1929 Art Deco office tower, originally designed by architect John M. Donaldson. According to John Gallagher, business writer for the Detroit Free Press and co-author of the American Institute of Architect’s guide to Detroit, it is a “great old building,” seemingly influenced by Eliel Saarinen’s losing, but admired, Chicago Tribune competition entry. While Gilbert’s plans for the building have not been announced, they will undoubtedly include a reuse of at least the exterior.  If only for this one act, Gilbert must be applauded. 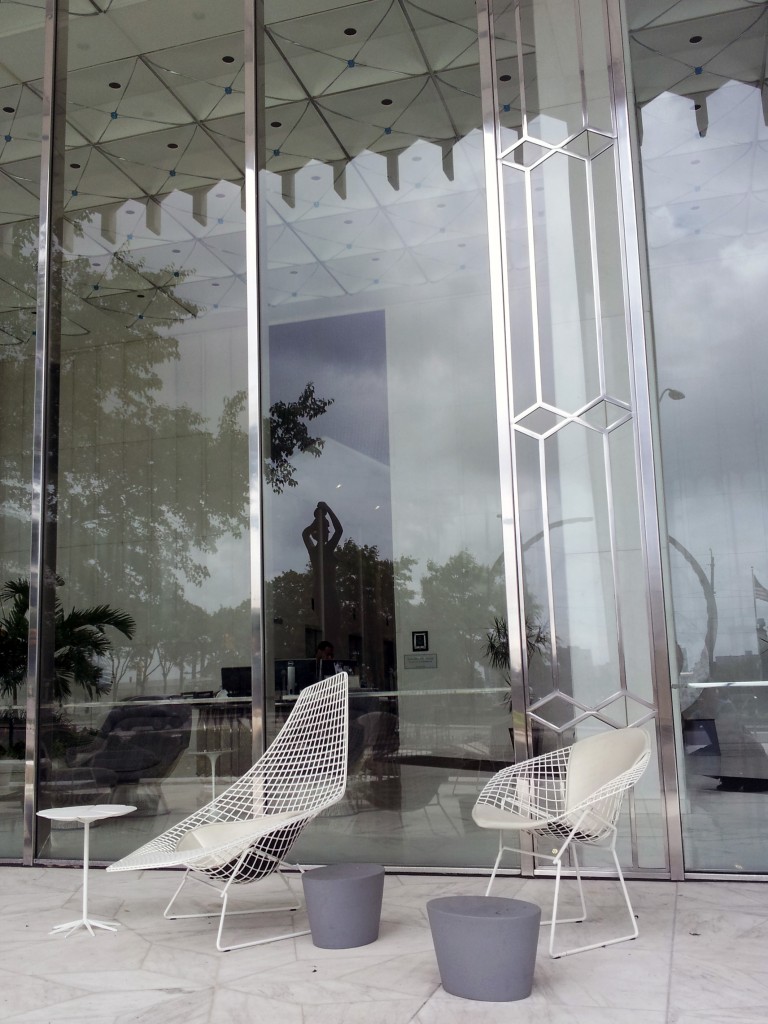 The lobby of Minoru Yamasaki’s One Woodward Avenue building

Another example of Gilbert’s approach to existing structures is a building of more recent vintage, Minoru Yamasaki’s One Woodward. One Woodward is a precursor to the architect’s now-destroyed World Trade Center, designed approximately a decade before its more famous counterpart. Gilbert could have “updated” the lobby at One Woodward. Instead, the original was maintained, the building was cleaned, and chairs were added to the street-facing terraces. It looks like a resort. To quote Gallagher, the building now “sparkles.”

Gilbert’s reuse of Detroit’s surviving buildings is not a given. It requires deference to those who have preceded us. In contrast to Gilbert’s approach is the Ilitch family. Owners of the Detroit Red Wings, they are building a new hockey arena. In an otherwise large, vacant site, the Ilitches have insisted that the historic Park Avenue Hotel be demolished. The given reason: a delivery ramp must be accommodated at this precise location. 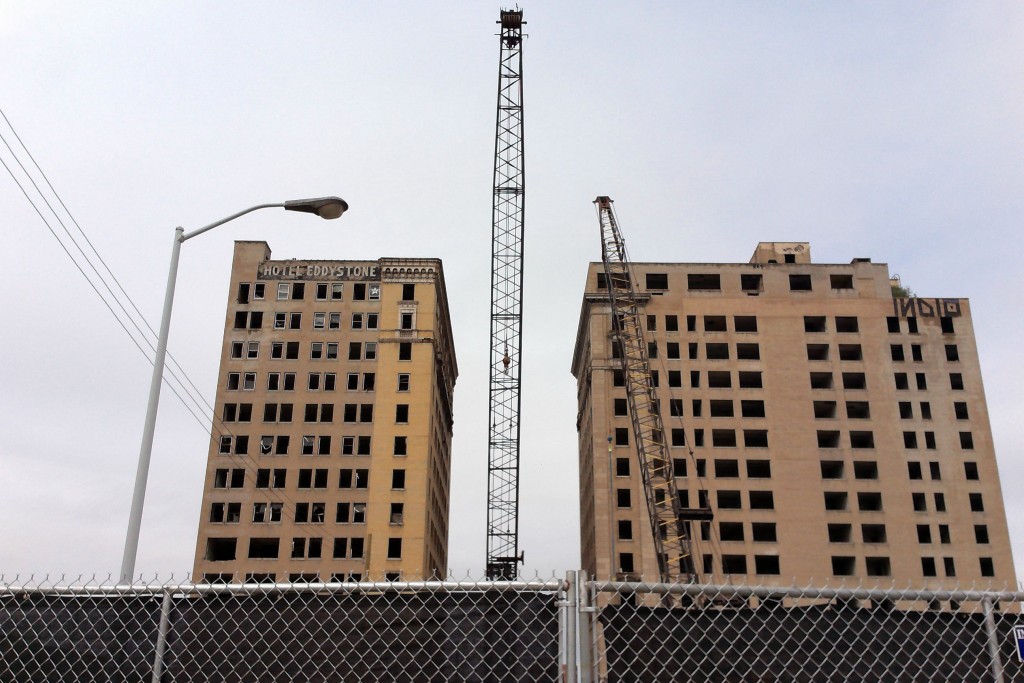 In contrast to Gilbert’s approach, the Ilitch family has slated the historic Park Avenue Hotel for demolition to accommodate construction of a loading ramp as part of the new Detroit Red Wings hockey arena.

Gilbert has undertaken a relative lack of new construction. His first new building is “The Z,” which takes its name from its site—two corner lots diagonally across from each other that meet in the middle of the block. Disappointingly, the Z is primarily a parking garage. A Gilbert-funded planning report, “A Plan for Our Time,” states that downtown should have parking that “matches suburban expectations for … ease of use.” 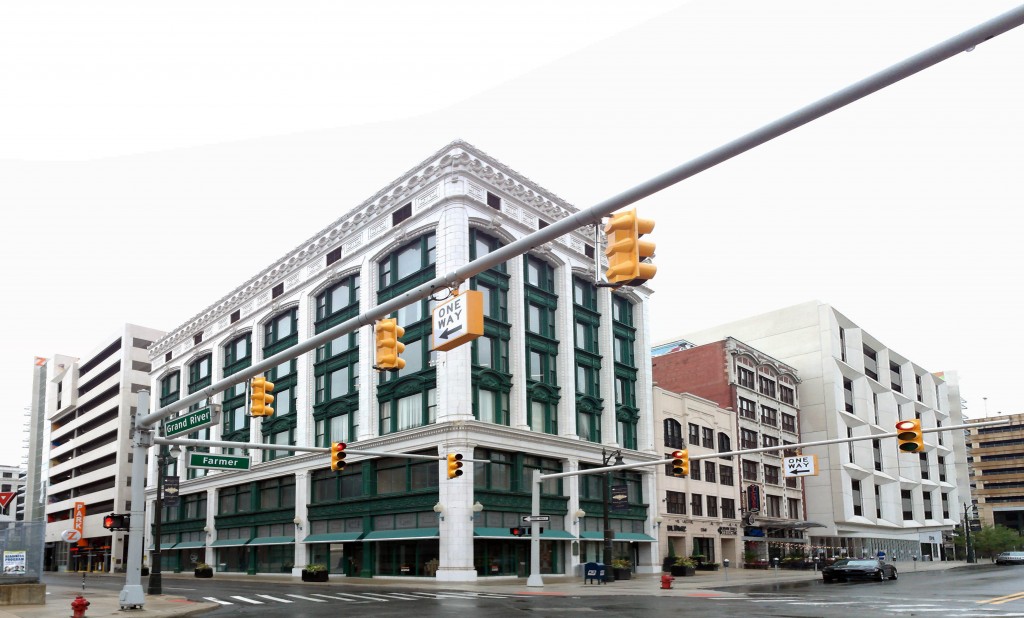 One of Gilbert’s few new construction projects, “The Z .”

An alley runs between the two halves of the Z, part of which is covered by the mid-section of the garage.  This alley, now called the Belt, has been made pedestrian-friendly with strings of overhead lights, seating and art installations. One, by Shepard Fairey, is a critique of the degrading aspects of petroleum. 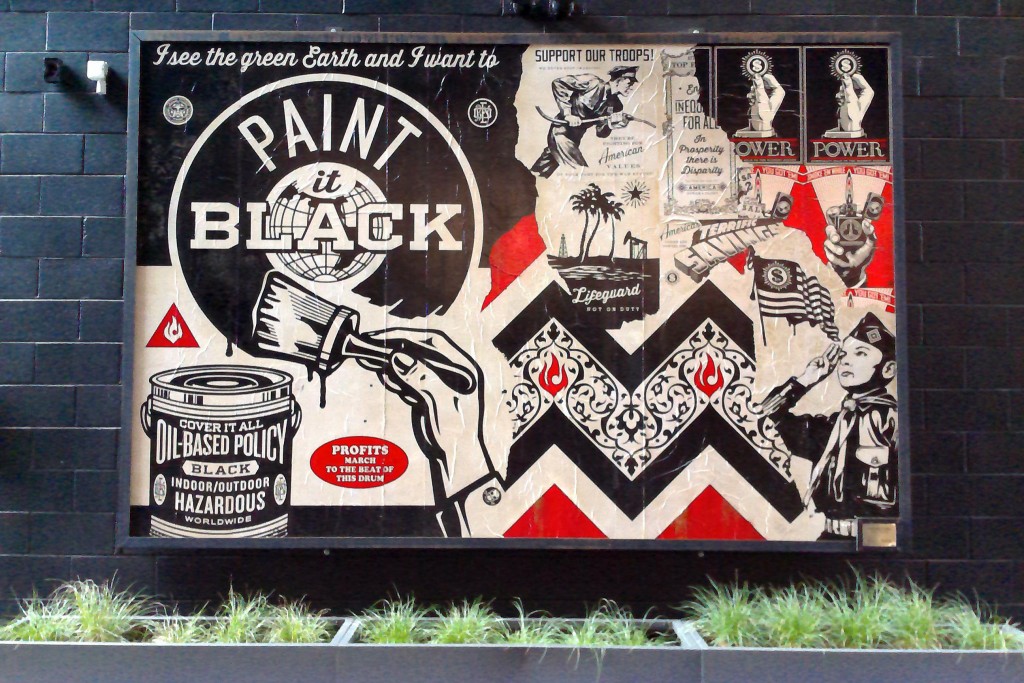 Gilbert recently announced a new housing development in the Brush Park neighborhood, within a mile of downtown. A one and one-half block site, it is vacant except for four late-nineteenth-century homes.  Commendably, and in accord with his preservationist tendencies, Gilbert will be rehabilitating these properties as part of the larger development. 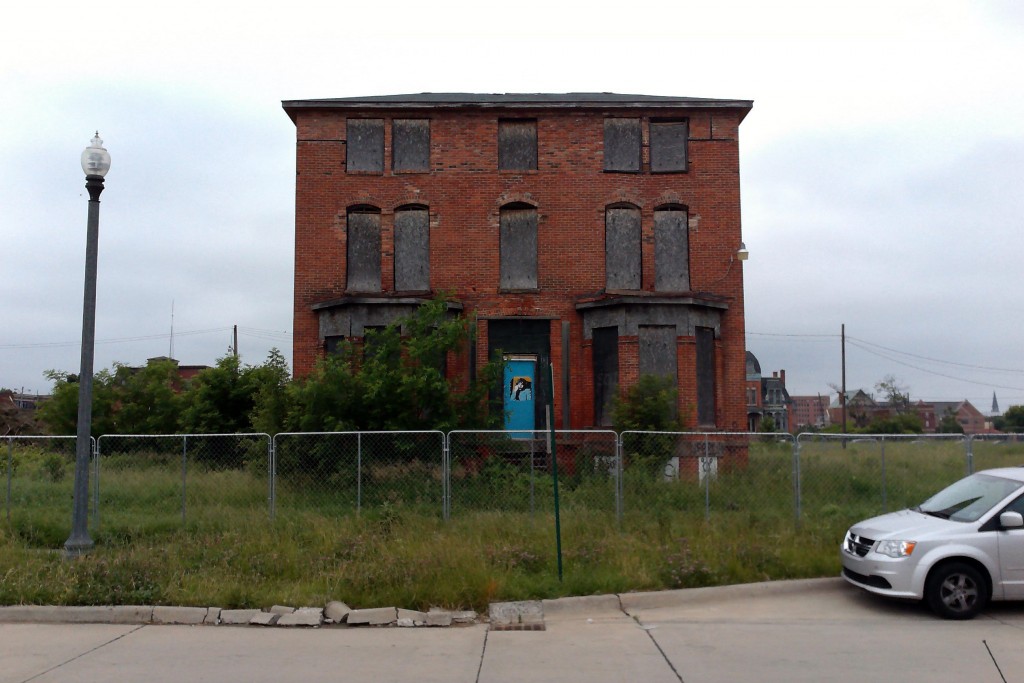 A vacant home in Brush Park is to be maintained and incorporated into Gilbert’s new development.

The design, use and management of public space are the stickiest parts of Gilbert’s involvement in downtown. Detroit has, until recently, either not been able or willing to maintain even rudimentary public services. Gilbert’s corporations, as well as others, have made investments in what traditionally have been public responsibilities: purchasing cars for the police department; funding a new light rail along Woodward Avenue, the M-1; and provided programming and security for downtown’s parks. 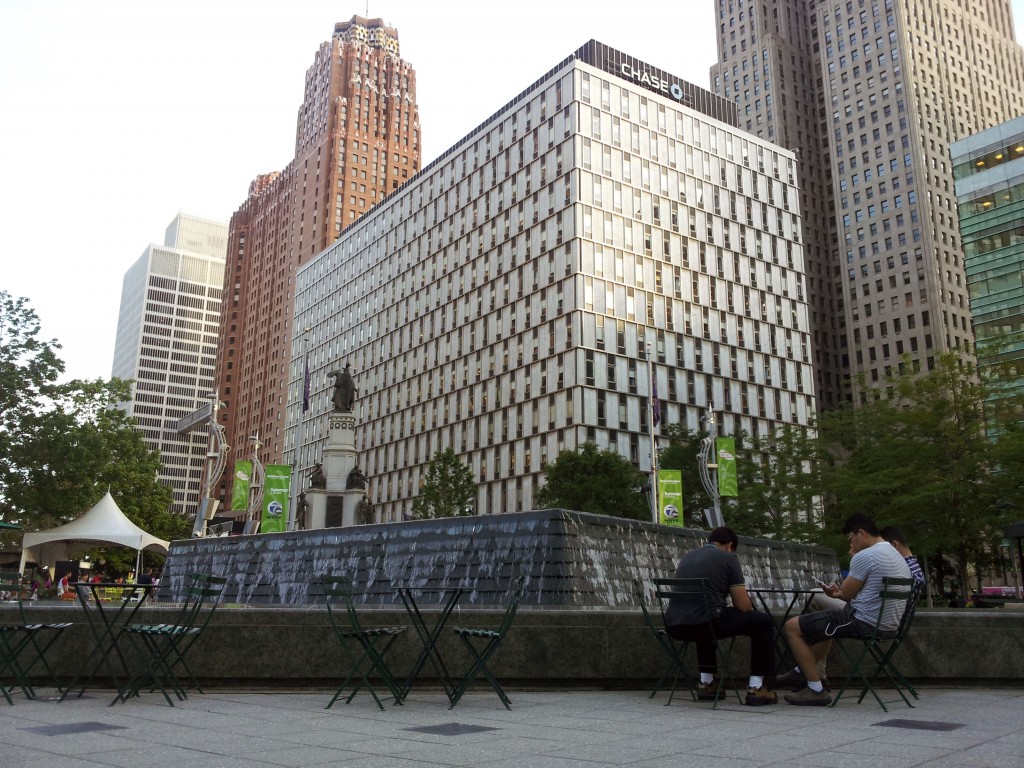 The fountain at Campus Martius

I visited Campus Martius Park and adjacent Cadillac Square several times. The park is well-used by people of all colors. There are things to do for free and to buy. There are well-used basketball courts, a lawn, movable chairs and tables, and a fountain. On the commercial side, there is a restaurant and an open-air bar. The economic range of users is broad. The spaces are clean and there is a not-overbearing presence of management and security. 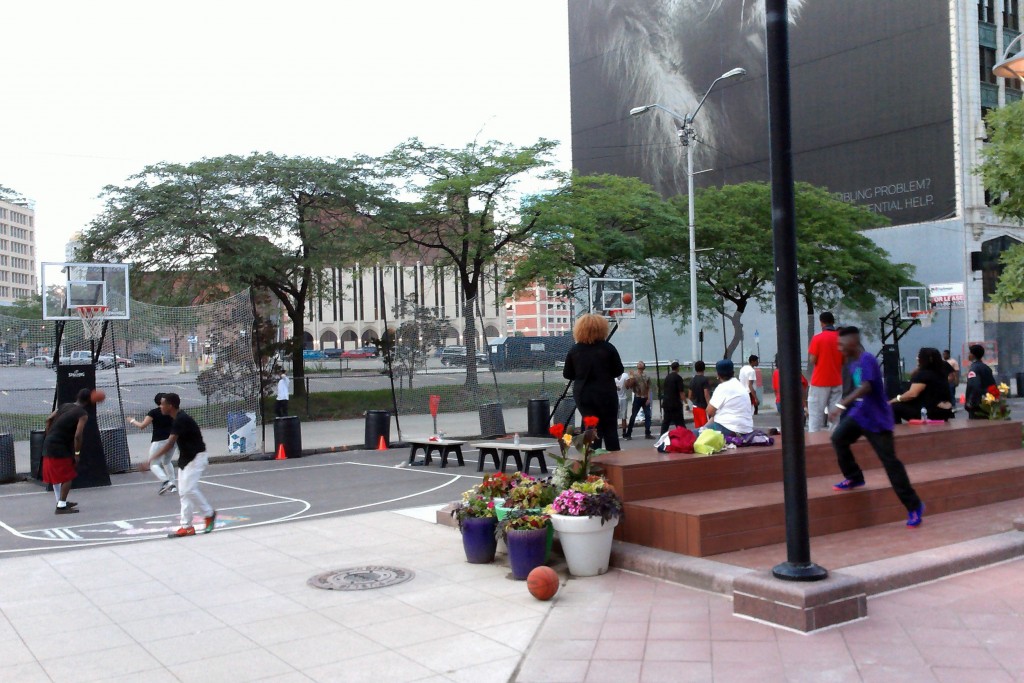 Campus Martius and Cadillac Square are maintained by a corporate-funded nonprofit. The design and programming have been developed with the highly reputable nonprofit placemaking consulting firm, Project for Public Spaces. Project for Public Spaces’ approach is based on the pioneering urban outdoor space observation work of William Whyte. Whyte observed and hypothesized that successful places must have movable seating, sun, shade, food, someone who appears to be responsible for the space, and other people to watch. Campus Martius Park and Cadillac Square have all these elements.

Privately managed outdoor spaces are common, including Millennium Park in Chicago. Where the public entity that manages open space is closely tied to for-profit ventures, there are two pressures: to provide an amenity to the community and to support commercial activity. These goals are often complementary, but not always.

I saw people at Campus Martius Park and Cadillac Square who looked to be homeless. This is a good thing:  the parks are also for them. But is there a point at which there are so many people who may not appeal to potential shoppers and diners that management will take steps to discourage their presence?

Gilbert’s influence is large in Detroit, and while welcome, I heard many worries—albeit largely hypothetical ones—while conversing with Detroiters. What are his true motivations? Does he have too much power? Will Detroit be suburbanized?

I am sure that Gilbert, the person, has multiple goals. He likely both wants to make money and to improve the city, perhaps most evidenced by his mindful preservationist approach. The problem though is that the public (the city, state, or federal government) has left a vacuum. It is not Gilbert’s responsibility to fill the void, and the sheer scale of his investment is fodder for both wonder and skepticism.

Gilbert and his corporations have invested more than one billion dollars in downtown and its vicinity.  They have helped fund public improvements and brought historic buildings to life. How can we object to this?

I have a certain unease though, no matter how welcome the needed investment may be, when entities that are not necessarily responsible to the public appear to own the public realm.