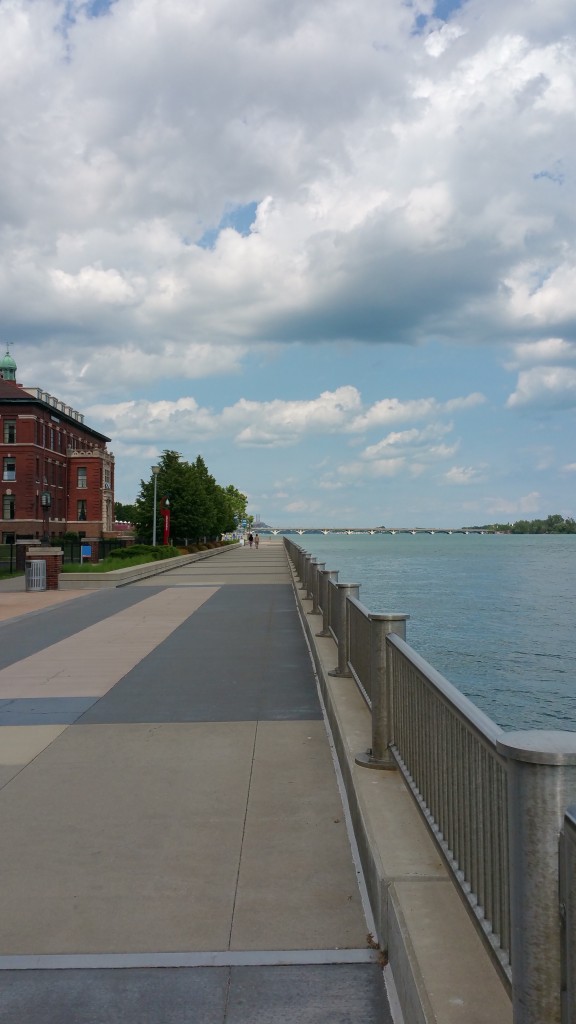 I asked a longtime friend what represents the new Detroit, my hometown. Her response, “the most exciting development is the RiverWalk,” led us to strap a couple of bikes to a bike rack and head downtown to spend an afternoon in early June experiencing our “new” native city.

The Detroit RiverWalk, a project of the Detroit RiverFront Conservancy, is designed as 5.5 miles of recreational green space along the Detroit River. The RiverWalk will extend from “bridge to bridge”: from the Ambassador Bridge to Canada—made famous in the dramatic closing scenes of Jeffrey Eugenides’ “Middlesex”—to Gabriel Richard Park, just east of the Douglas MacArthur Bridge, to Belle Isle, a 982-acre state park.

There are many entry points to the 3.5 miles of completed RiverWalk.

The western end of the RiverWalk currently begins along a massing of civic and commercial buildings and public space: Joe Louis Arena, named for the famed prizefighter whose fist is memorialized in a Hart Plaza sculpture; Cobo Center, where the Rolling Stones played during their legendary 1972 tour, attended by yours truly with a front-row seat; the GM Renaissance Center, or RenCen, with a RiverWalk atrium and wading fountain; and Hart Plaza. Overlooking the RiverWalk in Hart Plaza, the Gateway to Freedom International Memorial to the Underground Railroad depicts former slaves looking toward Canada’s shore, mirrored in Canada with the Tower of Freedom sculpture by the same artist.

We started out at the eastern stretch of the RiverWalk, an assemblage of landscapes that represent a history of the city, its waterfront, and the challenges of a public infrastructure project. A handsome fourteen-and-a-half-acre complex of red-brick buildings, built by pharmaceutical company Parke Davis in 1902 as offices, manufacturing plant, and research laboratories, fronts the river and the RiverWalk. The complex was renovated by the Stroh family, of Stroh’s Brewery Company, and the Stroh River Place and Talon Center, with offices, condo residences and the Roberts RiverWalk Hotel, is now on the National Register of Historic Places. 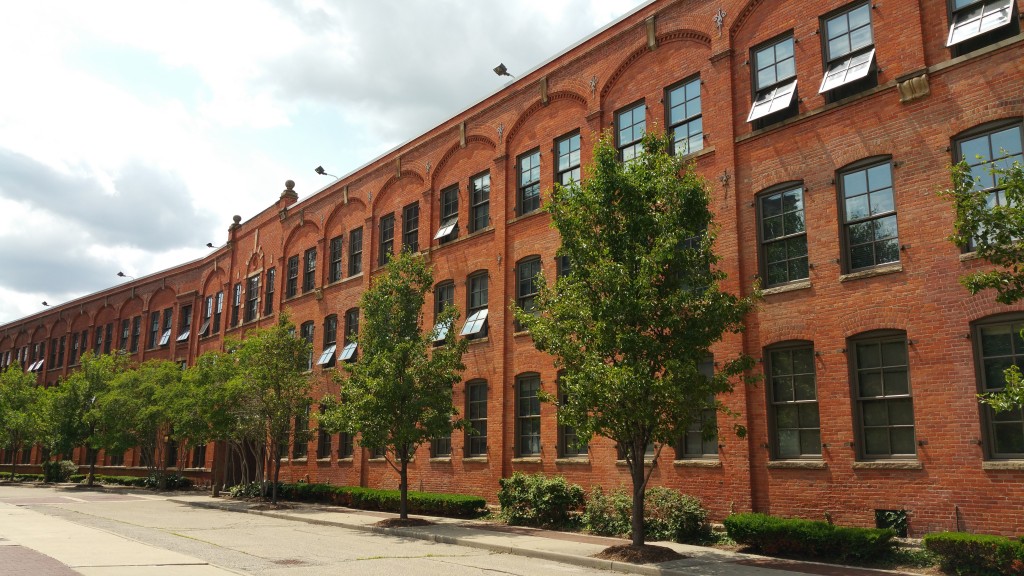 On a circuitous route past the UAW-GM Center for Human Resources, and some private development, we arrived at Mt. Elliott Park, a little kitschy, with its nautical and wharf themes, but an inviting play station for the few dozen children and families enjoying the sunny afternoon. 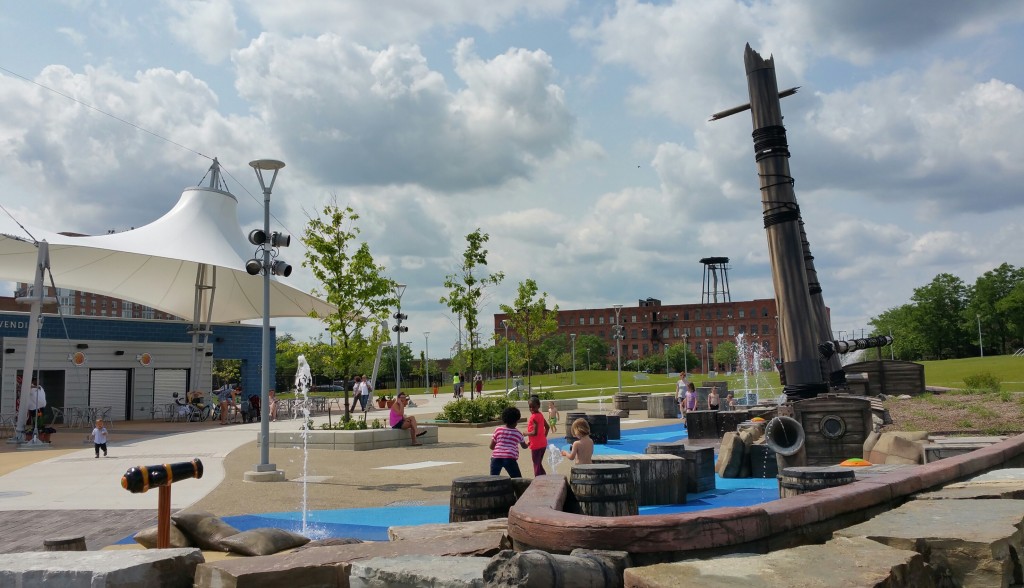 A chain-link fence separates the park from a forty-three-acre brownfield, land owned by Uniroyal Tires, approximately one-third of which has been remediated. We skirted the area, biking north toward the MacArthur Bridge along a bleak downtown artery, Jefferson Avenue.

We approached MacArthur Bridge. Most of Belle Isle’s attractions were blocked off due to the Grand Prix race in late May, so we didn’t cross the bridge to the island. Time it right, if you can, and make the trip to this place prominent in the memories of Detroiters who spent childhood afternoons picnicking, boating and visiting the children’s zoo—and, in the memories, less innocent, of other Detroiters, born after, say, 1975. 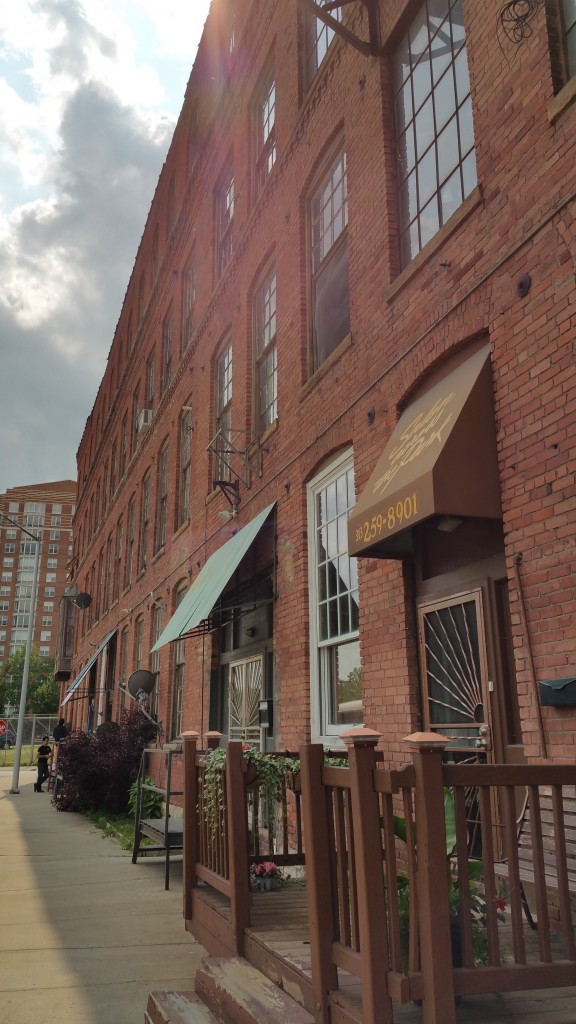 Frederick Law Olmsted created a design, some of which was completed, for the landscape. The Belle Isle Conservatory and Aquarium were designed by Albert Kahn, renowned for his design of the Ford River Rouge Complex and the Fisher Building, a sumptuous art deco masterpiece in the New Center neighborhood, which was recently sold at an auction for just $12.2 million.

Heading back west, we biked to the corner of Iron and Wight Streets, at the edge of Mt. Elliott Park, where a large, rehabbed nineteenth-century industrial building with residences on the upper floors houses a collection of boutique ground-level storefronts.

Next stop: The Dequindre Cut Greenway. Past Chene Park event center, past the Milliken State Park, Harbor and Lighthouse, the Dequindre Cut, formerly the Grand Trunk Railway Line, is a below-grade greenway, which will extend from the RiverWalk to the open-air Eastern Market north of Jefferson Avenue. A slice through what had become some of the grittiest parts of downtown Detroit, the Dequindre Cut features a twenty-foot-wide paved pathway, with separate lanes for pedestrian and bike traffic, providing the cover of green sanctuary while retaining the hulk of concrete engineering—now a canvas for graffiti art—that moved people and goods to and from the river. Until the remaining half-mile of the two-mile trail is completed, one has to navigate the climb to Jefferson Avenue and a zigzag of treacherous streets with ruthless drivers to reach Eastern Market. Arrive before closing time on market days and enjoy some refreshments at area markets and delis. 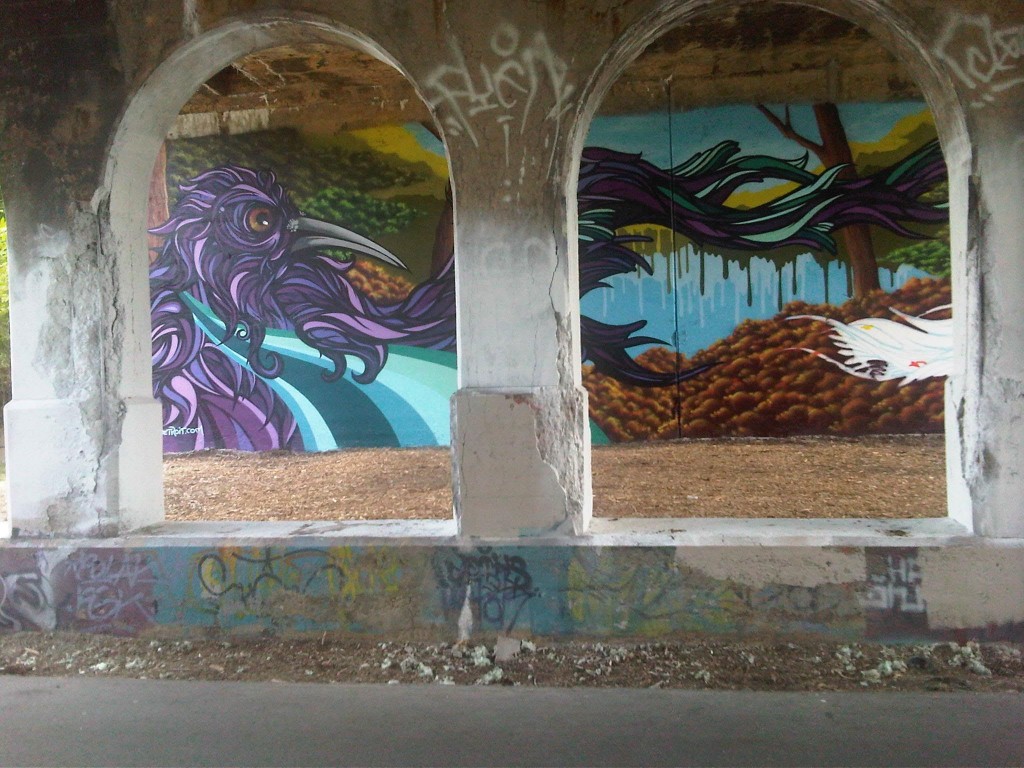 The final leg of our journey led past Milliken State Park, Harbor and Lighthouse, toward the Outdoor Adventure Center, constructed from the shell of a nineteenth-century industrial building. A project of the Michigan Department of Natural Resources, the center will be a hands-on adventure experience featuring a kayak simulator, simulated eagle’s nest, and an “Up North” exhibit with a ceiling-suspended DNR airplane used for aerial surveys of the Upper Peninsula. 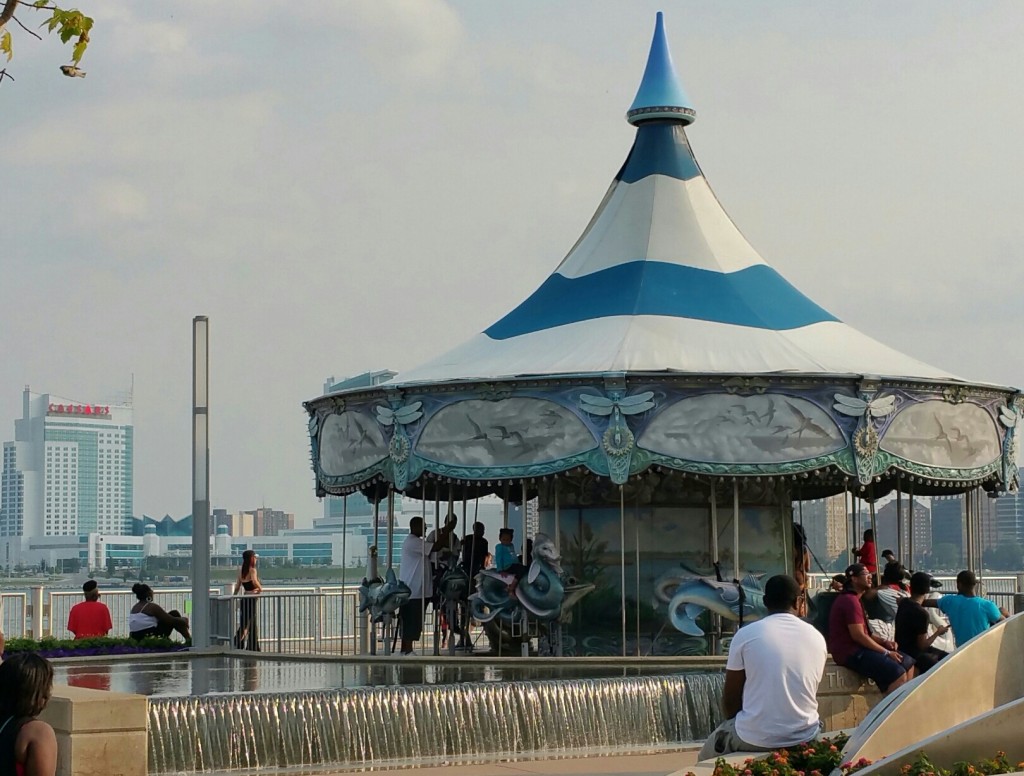 The denouement of our nearly four-hour bike hike brought us into open land, past a hillock covered with fragrant wildflowers, and into the Milliken State Park Wetlands. As we passed Rivard Plaza—check out the Alice in Wonderland-style carousel!—and the RiverWalk Garden Rooms, heading west to where the RiverWalk currently ends at Joe Louis Arena, more people, strolling solo or in groups at the close of a sunny afternoon, filled the area.

Wherever you start and finish, the Detroit RiverWalk will be an urban adventure. 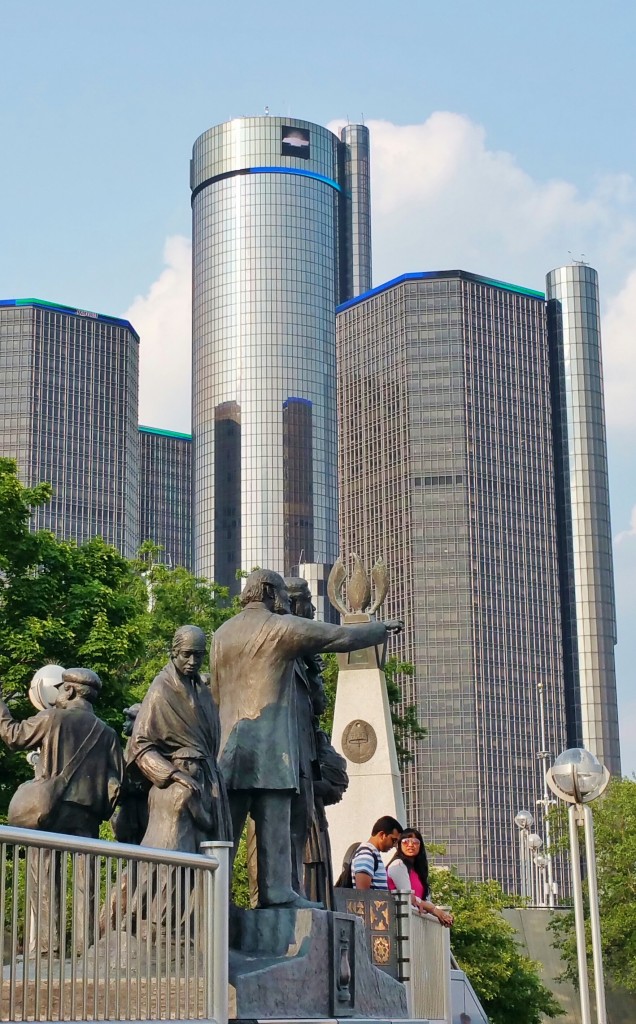 Gateway to Freedom International Memorial to the Underground Railroad, RenCen

One image, in particular, has stayed with me. We had reached Jefferson Avenue on the Dequindre Cut, where the path now stops, and I looked ahead to the last half-mile, where construction continues. In the distance were three or four more viaducts, the surrounding land still barren. A sense of mystery came over me: of how uncertain, still, is the fate of this once vibrant, fast-moving American city of industrial giants and design innovation: a city whose crumbled foundation and tattered reputation have forced Detroit into the extreme edges of city rebuilding.

One thing is certain, the city is, again, a pioneer in urban design, inviting us to make our presence—our imagination, ideas, and goodwill—felt as an active force of collective reinvention through the city’s new dreamscape.