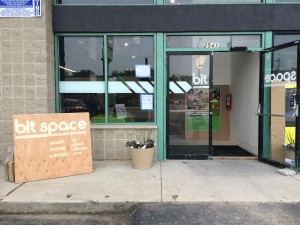 By Michael Workman
Sweet summer rainstorms! My neighborhood of Lincoln Square recently got a very unique new business in the strip mall on Lawrence Avenue. Next door to the LA Tan salon and its massive Day-Glo pink sign sits a sprawling maker facility called Bit Space.

Bit Space is done up like a boutique hotel with all the blonde wood you can shake a sawn leftover piece of two-by-four at. Conceived as a daycare summer camp for kids, it is organized around principles of instruction in the use of current and past technologies intended to teach, as well as entertain, children in the art of making.

My son Tristan and I made our way past the spot recently, trudging through the sweat-glazing swarm of one of those horrific scorchers we’ve been experiencing of late.

Inside, we were welcomed warmly by the staff, who walked us through the space and introduced us to its mission. They led us past rows and rows of pegboards lined with sets of screwdrivers, saws, pliers and other machine tools. It’s a sizable space, and as we explore, we notice a number of parents and kids milling around, talking, discussing schedules, tinkering. 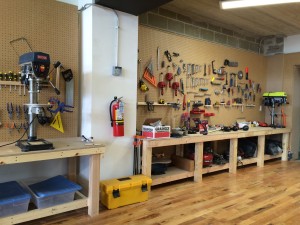 There’s a free-standing laser cutter at the front and, across the aisle, a MakerBot running off a series of dollhouse miniatures. Behind the MakerBot, an instructor sits hunched over a laptop, surrounded by a transfixed phalanx of kids, video projector casting a bright white square on the white wall behind him of an object he’s modeling. As he manipulates the vectors on his laptop, it moves in the virtual space of the projection and the kids are delighted at this.

Bit Space’s bustle matches the engineering and design rigor that are the fundamentals of the maker program with an articulate and obvious emphasis on craftsmanship. Their curriculum can be broken down into three distinct areas that kids choose their focus from: bytes, prints or bits.

“Bytes” gives them the code; “prints” the 3D printing and modeling vocabularies; and “bits” offers tool-and-die engineering concepts. There are also a litany of sub-categories to choose from, including “Things Made From Other Things,” in which kids take apart common household objects such as alarm clocks and make something new out of them, The “Things With Batteries” program uses sensors and lights to create programmable electronics, and “Things You Shred/Things You Sit On” models formworks, and even shows kids how to make their own skateboard.

It’s this interactivity which is the draw of the camp. My son worked with one of their walkthrough labs, starting with assembly on one end and working all the way through the cutting phase to produce little wooden “X” and “O”s at the other. He skipped happily from one table to the next and was paired with an instructor who helped him saw with a wooden dowel rod, complete with instructions in safety. At the end, he had created a painfully cute pegboard tic-tac-toe game that we played with for a bit immediately afterward.

That’s partly the point of the entire exercise. These little takeaways of collaborative play are super for providing a context where parents and kids can join in on a shared activity.

Bit Space is a great opportunity to pick up some fun lessons in applied science. The Bit Space summer camp is for kids from first grade through high school, and although the session is already underway, you can sign up “by the week” through the end of the week ending September 4.

It’s salty at $450/week and an extra $100 for aftercare if you need to pick up the li’l maker after 4pm, but maybe it’s a good “teachable moment” to have the kiddie kick in some of that lawn-mowing money. Besides, Bit Space is offering essential exposure of finely grained tech and engineering knowledge to kids in our information age, so the payback down the line seems like a given.